Home > About Us > David Garrard Lowe 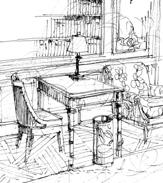 I often feel within the stacks of The New York Society Library that I am, in some way, mysteriously moving about within my own mind. For consciously and unconsciously, the tenuous webs of memory, which tie me to my very early youth, my schooling, all the books and essays that I have read, all the plays seen, and conversations entered into, link up, reverberate, and guide me over those twelve precious floors. There is no way that a mere man-crafted computer, or even the dear old card catalogues, can work as efficiently as does the physical act of moving between those shelves of books, where every Dewey Decimal number, every word of every title becomes like Proust's madeleine, an agent of recollection.

When I was conducting my research for Stanford White's New York, I would browse through the Library's stacks, looking not for architectural history but for the memoirs of those whose names had appeared in my notes, Mrs. Winthrop Chanler—I found you lurking in a corner of Stack 7 in the guise of Family Vista, which led me on to your beguiling Roman Spring. You, dear Mrs. Chanler, whose mother's first husband was Thomas Crawford, the man who sculpted the Indian atop the United States Capitol and whose daughter, Laura, married Stanford White's son. There too, on Stack 7, I spied you, Mrs. Reginald deKoven, wrapped in your charming A Musician and His Wife, with its recollections of your husband, the composer of "O, Promise Me," and its kind words about the murdered White. Together with the gracious eulogy for White in Roman Spring, your words helped confirm my doubts about the justification of the mud cast upon the great architect's corpse.

Sometimes, when the incessant hurlyburly of Gotham becomes like a radio tuned to three stations at once, I hurry to the Library's stacks on a very different mission. Like a worldweary traveler in Rome or Marseilles entering a silent church, I drift to the stacks piled high with what we so inaccurately call 'fiction,' searching for succor. Then I let my mind and the stacks themselves take over, let them conjure up long-dead voices reading to me those first delicious tastes of literature. Then, by the look and touch and the very scent of the volumes before me, I know whether or not they contain the right incantation for my present need.

Where else but in the sacred stacks of The New York Society Library could I find so much fantasy and so much truth?