A page from the 1813 annotated catalog.

The Many Catalogs of the New York Society Library

Though the Library now uses an online catalog, many of us fondly remember flipping through drawer after drawer of typed catalog cards in the Reference Room on the first floor. But cards were not always the method of cataloging this or any library's collection. For the first century of its history, the Library issued its catalog as a printed book. This format was portable and accessible outside the Library, which was especially useful in these early years when hours of operation and access to the stacks were limited, and before transportation and communication technology made visiting the Library easier. However, because of the fixed form and the time it took to compile and print, it was impossible to update the catalog when the collection grew without printing an entirely new volume. To compensate, frequent supplements were issued, sometimes bound together with earlier issues. Many surviving copies bear heavy annotation from librarians and other users, noting corrections, additions, and lost books. Some copies were specially bound with extra blank pages between each printed page for this purpose. Editing, compiling, and distributing the catalog became increasingly difficult as the collection and the membership grew, eventually leading to the adoption of the card system in the nineteenth century. 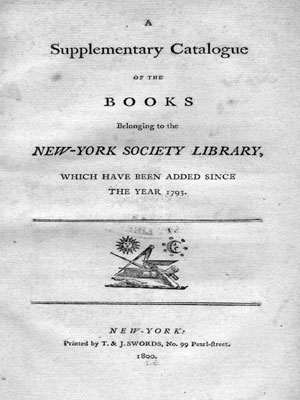 Title page of 1800 supplement to the 1793 catalog, published by the New York firm T. and J. Swords

The Library's earliest printed catalog was printed shortly after the 1754 founding by Hugh Gaine (1726-1807), a prominent New York printer and Library trustee. Gaine advertised the catalog in his newspaper The Mercury on October 21 of that year, for the price of four coppers. Unfortunately, no surviving copies are known. The trustees ordered another printing from Gaine in March 1758 and furnished each member with a copy. This small 24-page book contained a list of titles arranged in rough alphabetical order and grouped by book size, along with a summary of Library rules and an alphabetical roster of the 118 members. Another catalog was printed in August 1761, and another in 1773, also by Hugh Gaine. A 1766 supplement was advertised, but no known copies survive. Hugh Gaine's receipts show he was paid £10, 8s in New York currency for a run of 500 copies of the 1773 catalog. 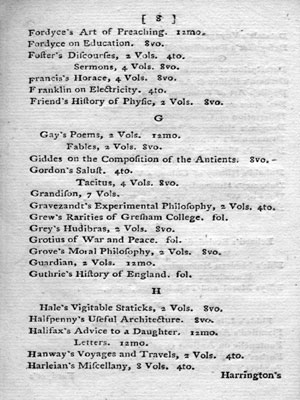 A page of the 1761 catalog, including "Franklin on Electricity."

These early catalogs demonstrate the growth of the Library's collection and membership over its first decades. Reportedly, the first catalog contained about 700 titles, with that number increasing to 859 titles in the 1758 catalog, and 1018 in the 1761. According to Library lore, parts of the collection were hidden in the belfry of St. Paul's church during the War for Independence, while others were destroyed, dispersed, or used by British soldiers to stuff their muskets, start fires, or barter for alcohol. Some titles were recovered following the occupation of New York, while others were repurchased or donated. The Library reorganized relatively quickly after the war, and Hugh Gaine was able to print a new catalog in 1789 showing about 3,100 volumes, along with the charter, bylaws, and a list of 239 members.

Supplements to the 1789 catalog were printed in 1791 and 1792, with page numbers in each continuing where the previous one left off. The 1791 supplement contains an additional 700 titles and an additional 66 members, while the 1792 supplement adds an additional 816 titles, this time omitting the size grouping, and 188 new members. The 1791 supplement names no publisher, but the 1792 was printed by Thomas and James Swords, who also printed a new comprehensive catalog in 1793 and a supplement in 1800. Thomas Swords (1764-1843) was also a Library member during these years. The 1793 catalog is one hundred pages long and is the only one to include call numbers for the books. Its preface states that the collection then comprised about 5,000 volumes. It also includes bylaws, charter, and a list of Trustees and members, by now totaling 892. From 1800 on, the catalogs also included place and date of publication for most titles, more like modern bibliographies. The Swords's press printed five hundred copies of the 1800 supplement, selling for 18 cents each. By this time, the Library's collection had reached nearly 6,000 volumes. 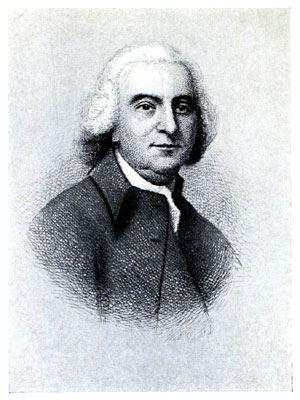 Hugh Gaine, the printer and trustee who created and advertised the early catalogs and supplements

In 1813, C.S. Van Winkle printed a new catalog, as well as a supplement in 1825. The 1813 catalog contains the charter, bylaws, and lists of trustees and members, and is the first to use a subject arrangement rather than an alphabetical arrangement. The 1838 catalog, published by James Van Norden, contains a historical notice referring to the 1813 as the first one "of any consequence," showing 13,000 volumes, and mentions the 1825 as adding an additional 3,000. Norden's 1838 catalog contained both an analytical subject catalog as well as an alphabetical listing of about 25,000 volumes, as did the supplement he published in 1841. The last printed catalog to be produced by the Library was printed in 1850 by R. Craighead. It also included an alphabetical and analytical listing, and was the largest at 621 pages.

In anticipation of another printed catalog, the librarians maintained detailed manuscript annotations in each catalog, along with a system of handwritten lists or slips arranged by author. Throughout the Library's history, these lists and slips were either pasted into scrapbooks or bound together with ribbon or in loose-leaf volumes, allowing for insertions and removals, and some of these lists still survive in our archives. By the end of the 19th century, a subject classification was being prepared. However, the trustees never ordered another catalog printed. Instead, in 1896, trustee F. Augustus Schermerhorn paid the cost of creating the card catalog, totalling $15,000 for a set of cabinets and cards, and for the services of eight trained catalogers to catalog the collection according to the new Charles A. Cutter "dictionary" method, with a simple subject system devised by the librarians. The process took nearly 3 years to complete, and the card catalog was adopted in 1898. After this time, cataloger Jacob Ermoloff, whose annual salary was $760, wrote the cards by hand until 1908, when an Underwood typewriter was purchased for $100. Staff member Marion Morrison (King) lamented the loss of his elegant penmanship.

The bylaws in the 1793 supplement reveal both the expansion of the Library's hours and one of its operational issues.

Shortly after the Library moved to its current location in 1937, the trustees decided the books should be re-cataloged according to the Dewey Decimal system. For this project, Polly Fenton, teacher of cataloging at the New Jersey College for Women, was hired along with several temporary assistants, whose work resulted in the card catalog still situated in the Reference Room.

Later in the 20th century, the typewriters were replaced by computers, and after a lengthy conversion process of the existing catalog cards, a public electronic catalog was finally unveiled to the membership on computer terminals in the Reference Room in May 1998, and for a brief time, the electronic catalog and the card catalog were both maintained by the cataloging staff. The card catalog remains in the Reference Room, but it is only current to March 1989. However, some older parts of the collection never made it into the computer, so it remains useful for finding these titles. The computer catalog was later made available outside the Library via the Internet. In addition, many of the earliest printed catalogs have recently been digitized and can be viewed on the Library's website.

As keepers of the written word, libraries have changed, enlarged, and matured alongside the cultures that nurtured them. The Society Library has an almost unique history running parallel to the development of our country, and the creation, expansion, reorganization, and digitization of its catalog can be seen as a microcosm of that history.