Home > About Us > From Old Buildings of New York City 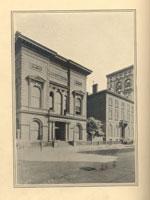 In the year 1700 the Public Library of New York was founded under the administration of the Earl of Bellomont, and seems to have progressed as the city grew, being aided from time to time by gifts from interested persons on the other side, several folio volumes now in the Society Library having been presented by friends in London in 1712, and in 1729 the Rev. Dr. Millington, rector of Newington, England, having bequeathed his library to the Society for the Propagation of the Gospel in Foreign Parts, it was presented to the New York Public Library.

The library, being in charge of the corporation of the city, was evidently not managed in a manner satisfactory to the people in general. In the year 1754 it was determined that a more efficient library was a necessity. In that year the present Society Library had its origin, and what had been the Public Library of the city was incorporated with it. Mrs. John King Van Rensselaer(1) states that it had its source in a movement started by Mrs. Alexander, who suggested to some of her friends that a circulating library should be established, the subscribers to collect sufficient money to send to England for the newest and best books. A list was made headed by Messrs. William Smith, Philip, William and Robert Livingston, John Morin Scott and William Alexander. After subscription books had been opened and the lieutenant governor (De Lancey) and council had "set their official seal" on the venture, a considerable sum was raised and an institution was regularly organized and later received a charter from Governor Tryon. Down to the time of the Revolution, the collection was constantly increased by the purchase of books, but during the Revolution, with a large part of the city destroyed by fire and what remained being under the control of a hostile army, the library suffered greatly. Mrs. Lamb(2) states that "four thousand or more books disappeared at the outbreak of the Revolution and were supposed destroyed, but many were hidden away for safe-keeping and reappeared after the war."(3)

In December, 1788, a meeting of the proprietors was called, trustees were elected, and the library again resumed operations.

The library was kept in a room in the Federal Hall in Wall Street and was used as the library of Congress. The first building put up for it use was on the corner of Nassau and Cedar streets in 1795, but the growth of the city compelling a change, a new building was erected in 1840 on the corner of Broadway and Leonard Street. The Library has occupied the present building in University Place since May, 1856.