Home > About Us > Patricia Bosworth 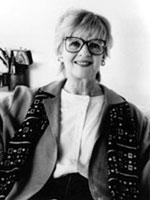 I first became aware of The New York Society Library back in 1964 when I was appearing on Broadway in Jean Kerr's comedy Mary, Mary. The actor who had the dressing room next to mine—Ward Costello—used to come back between matinee and evening performances with his arms full of books. Art books, histories, biographies, mystery novels. When I asked him where he'd gotten them he answered, "The New York Society Library on East 79th Street. Best damn library in the city—you gotta go there!"

So I did. And I was dazzled by everything about the place—the elegant, serene Members' Room, the twelve floors of stacks, the card catalogues bursting with all sorts of rare titles dating back to the 18th century. I learned that Willa Cather had been a member, that Barbara Tuchman did much of her research there, that other celebrated writers, such as Shirley Hazzard, were big supporters of the Library.

Needless to say, I became a member of the Library and from then on, I was there a lot. After I became a journalist, I started reserving one of the individual study rooms to write some of my first articles. Later, when I began writing biographies, I would often scribble part of a chapter in the silence of the Stack 12 alcove, with its great old table under the eaves.

Thirty years later, I'm still a member of the Society Library. I've researched all my books there, as well as the scores of articles I've done for Vanity Fair. The Library always has what I'm looking for. In our tumultuous, surreal culture, the Library is a repository of riches, opinions, thoughts, imaginations, and styles. The New York Society Library must be protected and cherished forever; it is a truly unique place.