Home > About Us > Sallie Bingham 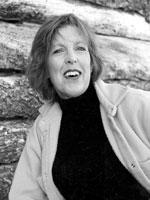 When I moved from Boston to New York in the early 1960s, I left behind the Boston Athenaeum, where I had worked in a mouse-like way, hoping not to be detected by the surrounding adults, all of whom I assumed were well-known writers (while I had only just finished and published my first novel, called, with the assurance of youth, After Such Knowledge). The Athenaeum, terrifying as it was, had provided me with an escape from my domesticated life as a wife. I dreaded not finding the same refuge for my identity in New York City.

I remember my amazement and delight when I first walked into The New York Society Library, more than three decades ago. Here was the silence I craved, the perfume of books, the seriousness of intention and attention, already wearing away in the world outside. But the somberness of my Boston hideout was dispelled; the librarians seemed to smile more, the ground-floor Reference Room was open to everyone, and the brightly colored racks of recent books gave more than passing recognition to the fact that literature marches on.

I wrote my first collection of short stories, The Touching Hand, in a long low room at the top of the Library, writing in longhand on yellow sheets. Riding up in the slow, creaking elevator was then, as it is now, a Zen-like experience.

When my daily stint in the top-floor room was finished, I allowed myself to descend to the majesty of the Members' Room, and to enjoy the marble fastness of the bathroom (I give thanks that none of this has been hideously "improved"). The Members' Room was at that time intimidating—many adults congregated there, and it only reassured me a little to see someone discreetly napping. But the magazines were colorful, the chairs were comfortable.

Now that I live and write in New Mexico, I return to the Library periodically to reassure myself that there is still a place on this earth where the written word is enshrined—a sanctuary where books are protected rather than purged. Doing research on my new plays, I find books that probably no longer exist in other collections.

I never fail to breathe a sigh of relief as I enter the Library's august doors and proceed up the celestial staircase, knowing that here, at least and at last, I exist as a writer.