Home > Library Blog > Another Word about the John Sharp Collection

Another Word about the John Sharp Collection

Last month I posted the first of this two-part series on the John Sharp Collection to mark its complete representation in our online catalog.  My previous post presents the details of Sharp's lif. In this post, I hope to outline a history of the collection drawn from evidence in the books themselves and in the manuscript catalogs he wrote.

Sharp built his collection in two phases, in America from 1701 to 1713 and then in England from 1713 to 1717.  The manuscript catalogs he wrote in 1713 (which survive today at the Lambeth Palace and Bodleian Libraries) and 1715 (at the New York Public Library) show those books he took with him from England or purchased in America before 1713, and those he acquired in England and shipped to America thereafter.

While a closer comparison of the manuscript catalogs with our existing collections is needed, this first look indicates that less than half of the books that Sharp originally purchased for his New York library survive in the collection of 135 titles at the Society Library today.  Sharp's 1713 catalog lists a total of 133 titles, from which 33 survive, and the 1715 catalog lists 319 volumes, showing that Sharp more than doubled his library during his years in England between 1713 and 1717.   John Fisher's Assertionis Lutheranae (Cologne, 1564) is the last known book added to the collection; its title page was signed and dated by Sharp in 1717.   Working from these two catalogs and the inscriptions Sharp and others made in his books, it is possible to complete a chronological reconstruction of the collection's development.  Sharp signed and dated the title pages of many of his books (often including his motto, "Ad quid venisti?", from Matthew 26.50), so it is clear that he purchased at least 30 of the 135 surviving books before returning to England in 1713.

In addition to placing Sharp's books within the chronology of his library's development, other markings tell us where they came from.  For example, some books bear the signature of John's father, Alexander Sharp.  Sharp may have brought these with him to America in 1701, or he may have received them after his father's death in 1709.  But since they appear in the 1713 catalog, we can be certain that they were acquired during the first phase of acquisition before Sharp returned to England.  Other books contain inscriptions from donors such as William Ayerst, who inscribed his copy of Gottfried Arnold's Historia et Descriptio Theologicae Mysticae (Frankfurt, 1702) to Sharp specifically for use in the library in New York.  Donations such as these were likely a direct result of Sharp's efforts to build up the library upon his return to England, as he described in his manuscripts.  Other markings include things like the signatures of former owners (without presentation inscriptions to Sharp) and prices marks.  At least nine of Sharp's books note the price which Sharp or another previous owner paid for them.  In Edward Leigh's Critica Sacra (Amsterdam, 1679), Sharp even notes from whom he purchased the book: "the Widow at the Blyns, 1705." 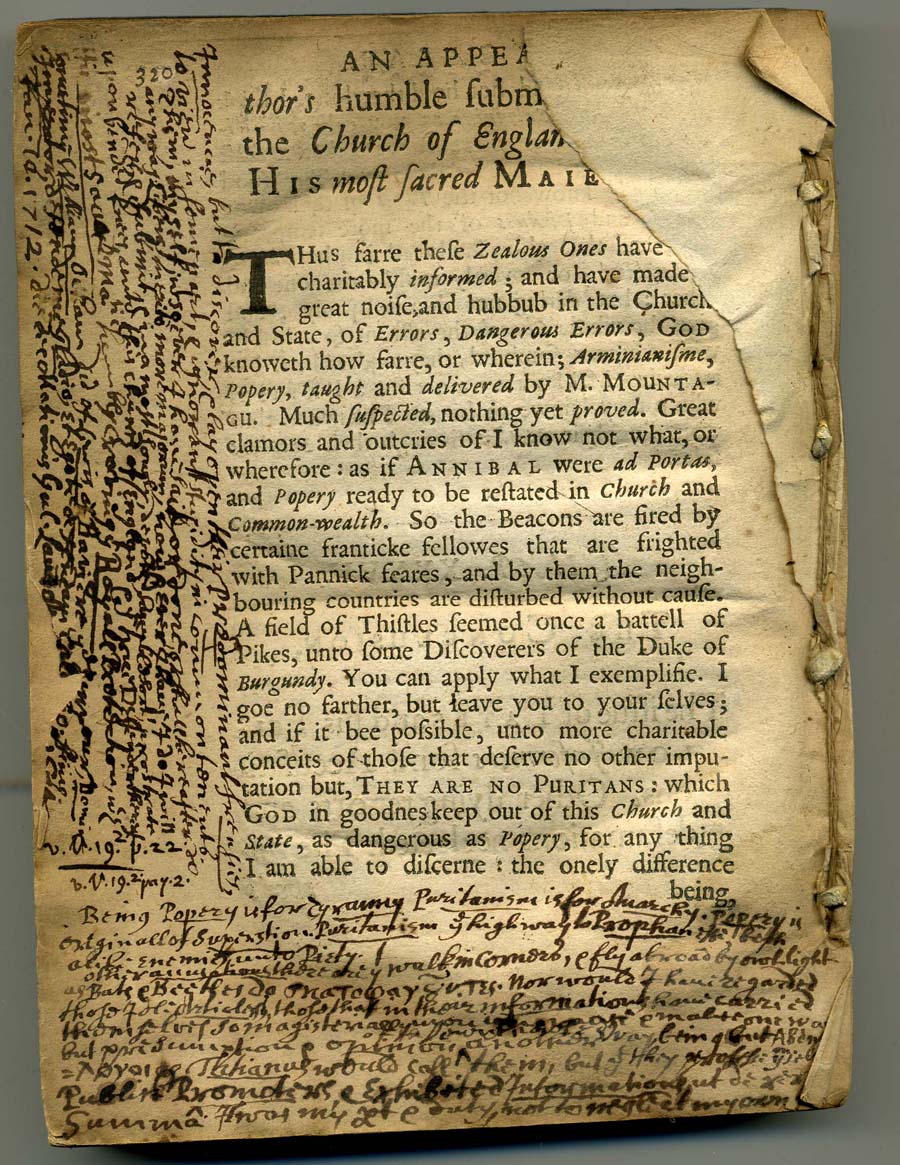 In addition to recording the date of purchase and names of donors, many of the books in the Sharp Collection contain other types of markings.  Many books contain annotations made by previous owners, such as Heinrich Pantaleon's Chronographia Christianae Ecclesiasticae (Basil, 1561) which has annotations by a 16th or 17th century reader, and other books have extensive notes by Sharp himself.  Montagu's Appello Caesarem (London, 1625) is a particularly strong example: several pages are covered with Sharp's notes, which seem be the minutes of a meeting of some sort.  Both Sharp's annotations and those of previous owners are key examples of the ways in which marks in books illuminate details otherwise lost to history.  The thoughts of readers - fleeting by nature - recorded in the margins help us not only to reconstruct individuals' libraries or reading habits, but also show what they actually read how they responded to the text.  When considered alongside Sharp's journal, in which he recorded brief descriptions about many of the sermons he preached, one catches a glimpse not only of the content of his sermons, but also the way in which he prepared them, making the use of texts at hand.

The books were not put to their intended use for some years after the collection was fully assembled in America, presumably after 1717.  No effort seems to have been made to found the school or library that Sharp had labored long and hard to realize, and so his books were held in trust for the next fifteen years by Governor William Burnet.   Benjamin Franklin wrote of having seen a "very large library" at Burnet's home, which probably included Sharp's books.  Finally, in 1730, the Sharp Collection and a collection of books donated by Revered John Millington were combined to form the New York Corporation Library.  Housed in a room in then-City Hall, the Corporation Library served a small group of readers until it closed in 1747.  Its collection became part of the foundation of the Society Library's own collection when it opened in the same room once in 1754.  However, not all of the Corporation Library books were incorporated into the Society Library's collections.  A note in the Library's first minute book dated September 11, 1754 records that the Library Trustees proposed:

That such books of the Corporation Library as we may judge will be of no service, & scarce ever read, may be put up into Boxes to be made for that purpose and secured, that so more room may be obtained for the convenient placing the books expected for the Library under our management, in case the same shall be found wanted.

For a time many of Sharp's books, and probably Millington's too, were boxed up and stowed away so that room could be made on the bookshelves for the 300 books that the Society Library Trustees had ordered from England.  (All of these were listed in the minute book as well, and make up the Library's first Catalog of 1758.)

In 1766, however, the Corporation Library was briefly revitalized, and a catalog was printed that year.  A single copy of the catalog survives at the Huntington Library in California, and Austin Baxter Keep was not aware of it at when he was writing his History of the New York Society Library in the early twentieth century.  Using this catalog, I have so far identified 112 titles which either survive in the Sharp collection today (81 titles) or appear in Sharp's 1713 and 1715 manuscript catalogs (31 titles).  This catalog is terribly important not only because it is the only known record of the first public library ever to operate in New York but also because that library was made up by collectors who lived in both England and America, who have yet to receive any scholarly attention.  The catalogs also help to identify the instantiation of texts which Sharp and Millington bought.  In all entries, a nearly full title is given (unlike in Sharp's manuscript catalogs, which list idiosyncratic references such as "Featly's Sermons Fo.") along with the place and year of publication, and sometimes even the printer's or publisher's name.  Working from this catalog, we can attempt to identify books in the Library's collections which have not yet been identified as books that were once part of the Corporation Library.

Neither the Corporation Library nor its catalog were mentioned in the Society Library's minute book in 1766, but the catalog itself states that "this Library, in which many antient [sic], curious, and valuable Books, stands in a very convenient Room in City-Hall, fitted up for it, and for the very valuable modern Library belonging to the New-York Society."  In other words, the Corporation and Society Library were once again roommates, and were tended by the same Librarian, Thomas Jackson.  The relationship Jackson described between the two collections is important, because I believe that this view of the collections affected their fates during and after the Revolutionary War, when both Libraries closed their doors.  The Corporation Library collection, including Sharp's books, was here described as "antient," suggesting that these books were more precious and valued than the Society Library's "modern" books.  In a way, the Corporation Library represents New York's first rare book collection to be described as such, and because of the sense of value attached to them they were more carefully protected from occupying British soldiers.  We have no records of how the Libraries specifically dealt with the onset of the Revolution, but the Sharp and Millington books must have been secreted away somewhere because they were discovered forty years later, hidden away in Trinity Church, pictured below.  In November 1804, the following advertisement appeared in the Morning Chronicle (5 November 1804, issue 499, p. 2):

CITY LIBRARY. - About a year ago the public prints noticed the discovery of a library of ancient authors in an unfrequented apartment in Trinity Church.  We understand that a considerable part of that collection has been recently placed in the city library.  These will afford a feast to the antiquarians of lierature, as there are among them many curious works, and the theological productions of several of the fathers. 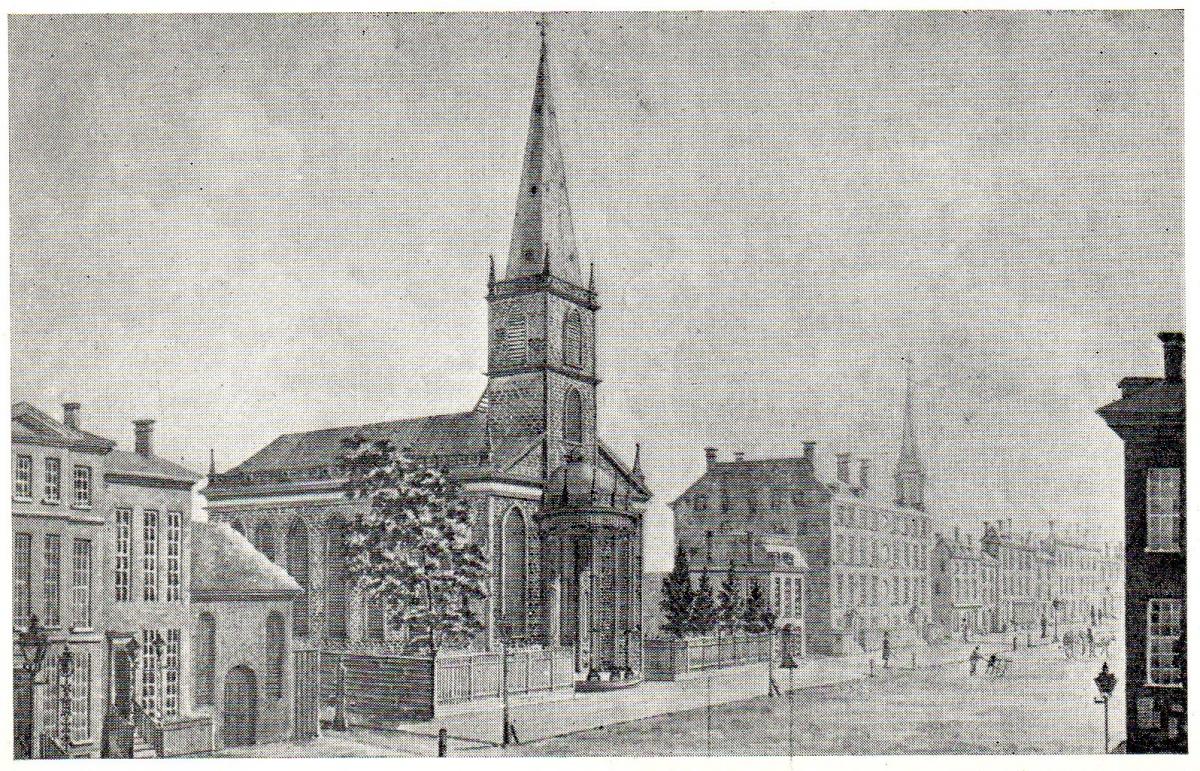 The repetition of the word ancient strongly implies that the books discovered were the same "antient" collections that once made up the Corporation Library.  As the newspaper reports, the books were deposited with the Society Library (commonly called the City Library) and have remained with us ever since.

While I have tried, in this post and my last, to contextualize the Sharp Collection and highlight its importance not only to the history of the Society Library but also to the history of books, reading, and libraries in New York City, there remains much work to be done.  In addition to a straightforward analysis of the contents of the collection, Sharp's diaries and his printed works could be examined in light of his annotations, the Corporation Library's catalog could be more thoroughly compared to Sharp's manuscript catalogs, and the Millington and Sharp collections can be parsed and their contents compared and contrasted with respect to the collectors.  It has been a treat to make Sharp's historic collection accessible so that this work can be done.