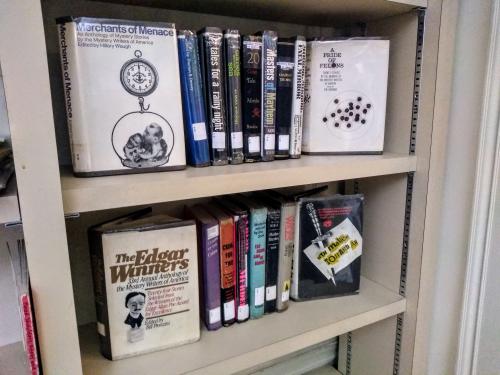 The Case of the Curious Cutters: Cataloging Mystery Anthologies

Have you been snooping around (aka keyword searching) for classic authors of intrigue like Robert Bloch, Fredric Brown, Miriam Allen deFord, or Lillian de la Torre, and noticed an increase in search results? That’s because the Cataloging Department here at the New York Society Library has been improving the records for two important and long-running mystery short story collections, Alfred Hithcock Presents and the Annual Anthology of the Mystery Writers of America. For the mystery aficionados in the NYSL membership, this means that it will be easier to find these anthologies (and your favorite authors) both in our online catalog and in the stacks. 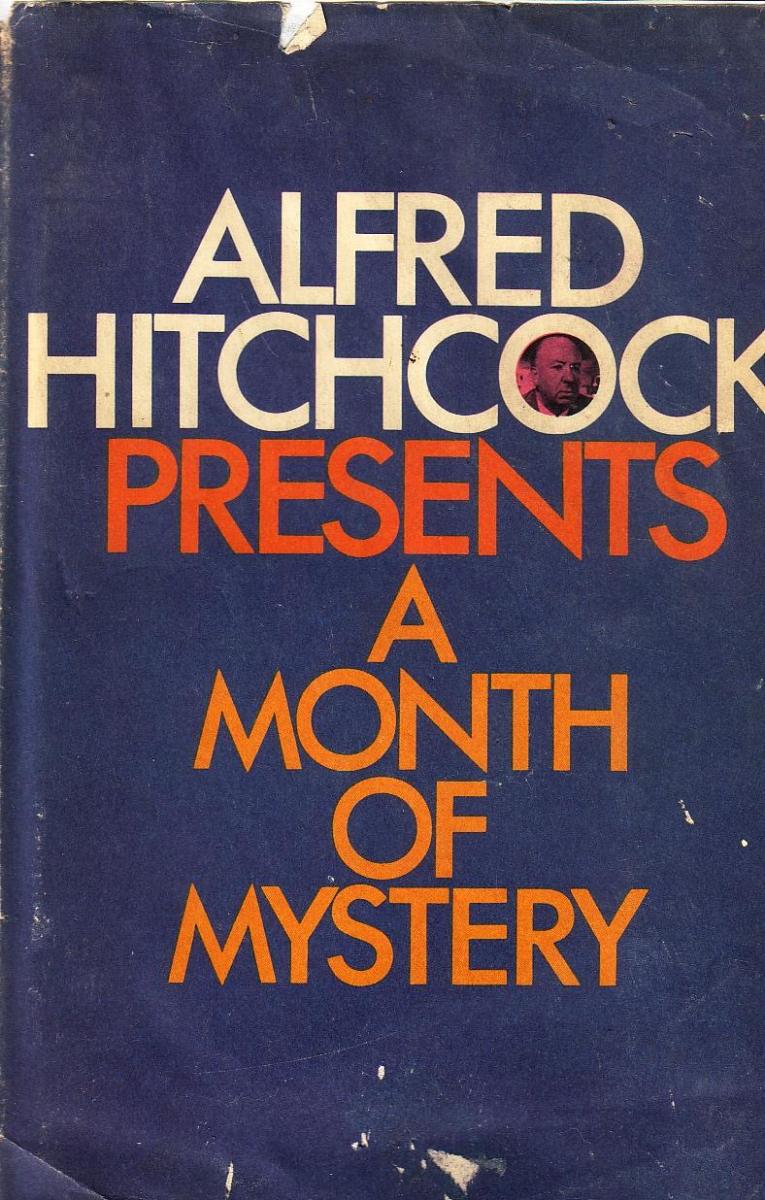 All of our nine volumes of Alfred Hithcock Presents are now located together on Stack 5 under “A” (for Alfred Hitchcock Presents) and all 17 of our MWA annuals are now on Stack 6 under “M” (for Mystery Writers of America). In the catalog, each book’s record now includes a complete table of contents (authors and titles are keyword searchable), as well as newly added subject headings (to associate them with our other mystery holdings) and series identification (all it takes is one click to find the other volumes in their respective series).

These improvements were necessary not only to bring the cataloging records up to modern-day standards (some of these books are nearly 80 years old, and cataloging has grown by leaps and bounds since then), but also to make the books more findable whether you are browsing physically in the library or online.

The decision to group them all together on the shelf was no simple determination. Regular Library users know the call number sticker on the spine denotes where it is shelved, which consists of a class number (indicating what type of book it is), followed by a Cutter (where it should be situated within that section). Typically, fiction anthologies are nestled under “F” (for fiction) followed by the first letter of the first word in the title. That works just fine for most anthologies—but these particular volumes posed unique questions. Is Alfred Hithcock Presents part of the title, or just a tie-in to the filmmaker’s popular television show of the same name? And, if the Mystery Writers of America volumes are part of the same series, why are some of them shelved on different floors? (For example, the MWA anthology Crimes Across the Sea used to be on stack 5 for “C” and Sleuths and Consequences on stack 6 for “S.”)

Deciding that each of these series should be grouped together was step one. Step two was implementing this decision. The Alfred Hithcock Presents series was relatively simple, as we just had to make sure to include the series at the start of every title, assuring they would be shelved under “A.” The Mystery Writers of America series proved more challenging because there was no uniform series title. So, we decided to list “Mystery Writers of America” as a corporate author in each record (to more accurately describe the organization’s collective role as creator). Thus, every book in that particular series is now under “M” for “Mystery Writers of America.”

But enough about cataloging—let’s get to the books!

Any filmgoer knows that Alfred Hitchcock was known as the "Master of Suspense" for good reason—and publishers were quick to capitalize on that association, tacking his name onto print anthologies and magazines (Alfred Hitchcock Mystery Magazine, started in 1956, continues to this day). After the success of his television show Alfred Hitchcock Presents, publishers smartly began applying that to a series of books. While it’s dubious that the auteur had time to be deeply involved with the books themselves, there’s no denying that whoever made the selections did the filmmaker’s name proud. Look at the contents of any book in the series and you’ll uncover a treasure of top-shelf suspense. For instance, Alfred Hitchcock Presents: a Month of Mystery (1969) includes then up-and-coming authors Lawrence Block and Joe Gores alongside stalwarts like Helen McCloy, Gerald Kersh, and Arnold Hano, who appears under the pseudonym Matthew Gant. (Hano, who passed away in October 2021 at age 99, was the author of the World Series classic A Day in the Bleachers, as well as the editor of Lion Books where he published classics by Jim Thompson and David Goodis). 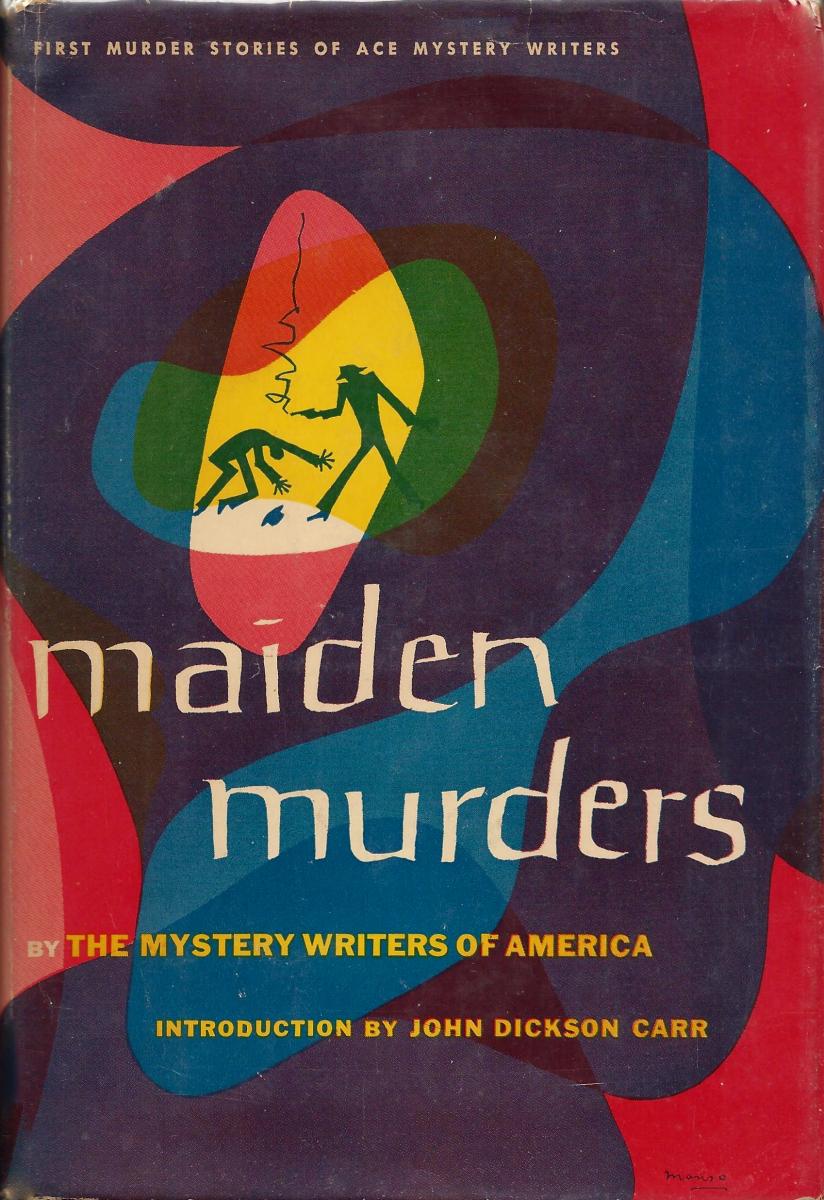 The Mystery Writers of America, founded in 1945, began issuing anthologies in 1946. “Each story was contributed free-gratis-for-nothing by authors interested in supporting an organization that has waged an unrelenting fight to have the mystery recognized for what it is: an integral and important part of the mainstream of world literature,” commented editor David Alexander in his introduction to Tales For a Rainy Night. “When these anthologies were first conceived,” explained Robert L. Fish, editor of With Malice Towards All, “and for many years thereafter, each volume had a central theme, and to some extent it is a pity that our imaginations, so readily rife with new plots and characters, somehow seemed to run dry in the matter of maintaining a continuing thread running connectively through each year’s stories.”

Thematic volumes include Crimes Across the Sea (“British Writers Writing About America and American Writers Writing About England” as per the front flap), Crime Without Murder (“A collection of chilling stories without a violent death in the lot”), or Maiden Murders (“there has been no question of trying to get an author’s best story, but simply his first”—which, ironically, was ignored by Day Keene, whose tale “A great whirring of wings” was, by my count, his 79th published story, which doesn’t take into account his decade of radio writing or theatrical plays). But whether there’s any overarching concept or not, these anthologies never fail to assemble a fine cast of authors, and are a must-read for any mystery fan.

On a personal note, I’d like to conclude by thanking Edgar-winning playwright and author Joseph Goodrich for pointing us towards Edward D. Hoch’s seminal article on the Mystery Writers of America collections, “Thirty-five years of MWA anthologies” (Mystery Writers Annual 1980), which was an invaluable resource in this project. NYSL members will remember Goodrich as the moderator of the “Golden Age of Mysteries: Tracing the Bloodline of Crime Fiction” panel in September 2016. Goodrich’s debut novel, The Paris Manuscript, was released in March earlier this year.

P.S. If you happen to notice that two MWA anthologies have the same volume designation of 33, pat yourself on the back for being a good detective. This is no mistake—both The Edgar Winners and Women’s Wiles make that claim. Just how this happened is the sort of mystery that catalogers and bibliographers—and suspense devotees—live for.