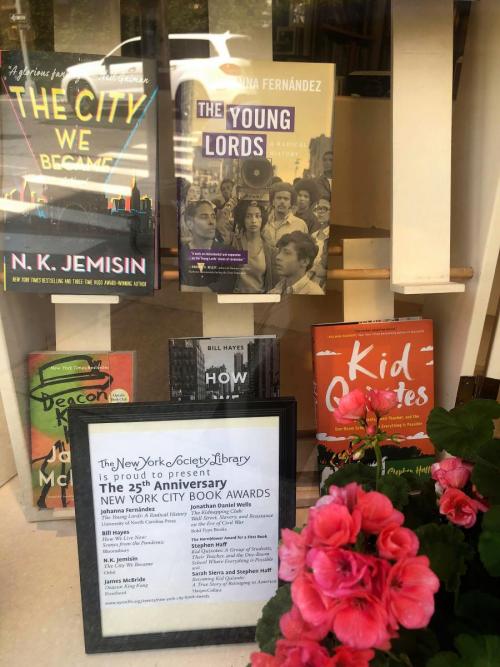 Head Librarian Carolyn Waters welcomed attendees, with remarks by trustee and awards sponsor Ellen M. Iseman, 2019 jury chair Warren Wechsler, and 2020 jury chair Bianca Calabresi. Events staffer Katie Fricas, who has worked closely with the jury in both years, emceed the evening. The presentation concluded with a festive overview of the awards' 25 years of history.

The 2019 winners expressed their appreciation to the Library and mentioned the relevance of their books to the rich body of literature about the city. Six 2020 jurors presented awards to the 2020 winners, who also spoke eloquently about their widely varied topics and genres.

Jonathan Daniel Wells, author of The Kidnapping Club: Wall Street, Slavery, and Resistance on the Eve of Civil War:
“New York City today is a remarkable place, lively, pluralistic, and wonderfully diverse. Yet the more one delves into the city’s history, the more one realizes that the wealth and power it now enjoys is based on a long legacy of slavery, racism, and violence. Like that of the nation as a whole, the story of New York’s rise is as much about the denial of freedom as it is about liberty itself.”

N.K. Jemisin, author of The City We Became:
"We're living in an era where billionaires fight over Mars while millions of people are essentially asked to die for corporate profitability, so we're all living in science fiction whether we want to or not. What I try to do is to imagine a world that pushes back. THE CITY WE BECAME was my love letter to a city that is in constant danger of soulless whitewashing, and the many ways that New York manages to pull together and remain a city for everyone."

Johanna Fernández, author of The Young Lords: A Radical History
"It was almost a year ago that New Yorkers observed white refrigerated trailer trucks parked outside of hospitals—impromptu, mobile morgues holding the fast-multiplying bodies of those dying of Covid-19 across the city. As New Yorkers observed those apocalyptic scenes with a sense of helplessness, it struck me that in their day the Young Lords - the Puerto Rican counterpart of the Black Panther Party—would have taken to the streets in protest. They would have donned homemade masks and hazmat suits to save lives and expose root causes, namely that U.S. for-profit healthcare was unequipped for the emergency because it’s organized around private medicine at the exclusion of communal health. The Young Lords: A Radical History is of this moment. The group believed that the struggle for human liberation is most poignant and necessary when we are most vulnerable and human: when we are sick and dying, unnecessarily. In the late 1960s, the Young Lords occupied Lincoln Hospital to dramatize a health crisis in the Bronx; drafted the first known Patient Bill of Rights alongside doctors and workers; and their militancy pressured the city to pass anti-lead poisoning legislation, among other victories. They were a profoundly effective, beloved and exciting socialist organization that fueled the power of the New Left in their time. There’s much we can learn from their strategy, clarity, shortcomings and vision as we fight to civilize our own 21st century world."

James McBride, author of Deacon King Kong:
"I wrote Deacon King Kong because I wanted to write about a world that I know and the city I love. Many of us who are part of the baby boomer generation remember the old New York well. In those pre internet days we were - by dint of geography and economics - forced to interact with one another. It made us grumpy, but it made us better people. I don’t expect those days to return. The decency of New York City will always remain. The city is better than ever, with new immigrants, and new ideas mixing with the old. I’m proud to be part of that. I know in my heart that the late Pete Hamill, the living gem who inspired so many of us, deserved it more. Let’s not wait to honor the older voices like Paul Auster, Denis Hamill, and so many others who gave the best of themselves to our town.”

Bill Hayes, author of How We Live Now:
“How We Live Now was a labor of love during such a difficult time in our city.  I'm deeply touched to be honored by the New York Society Library for this book.”

In the sidebar: A special NYC Book Awards winners display at the Corner Bookstore, June 2021.