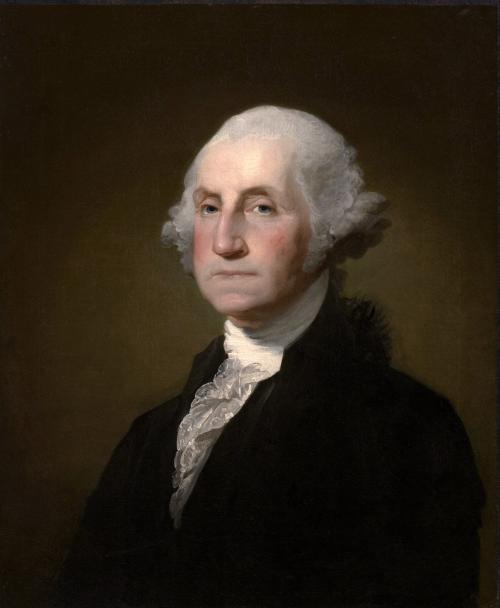 The Curious Case of the President’s Overdue Books

You’ve likely heard the tale of how George Washington borrowed two books from the Library when he was President and never returned them. Every now and then there’ll be a news article about a long-overdue library book, and they’ll mention the even longer-overdue book from the New York Society Library. It makes for a good story, and there’s some evidence to support it, but we may never know if it’s true.

I’ve been working with the Library’s early circulation records since shortly after I started working here in 2010, first transcribing circulation activity in our second ledger, then working to develop City Readers: Digital Historic Collections at the New York Society Library, which now includes all our transcribed early borrowing records. While working on ledger transcriptions, I noticed that many entries lacked a return date but the book in question circulated again, leading me to question the idea that the lack of a return date for the books that George Washington borrowed indicates that they were never returned.

The earliest circulation records we have are from July 24, 1789, found on the first page of the ledger. At that time, borrowing history was recorded chronologically by checkout date. Each day the Library was open, the librarian would list the date, and then for each checkout the book number (a practice that was quickly abandoned), title, volume, size, and the name of the person borrowing the book. The return date was recorded here when the book was returned. I imagine one of the major drawbacks to this system was that the librarian would have had to know the date that a book was checked out in order to properly check it in, or would have to look through pages of transactions to find the book. 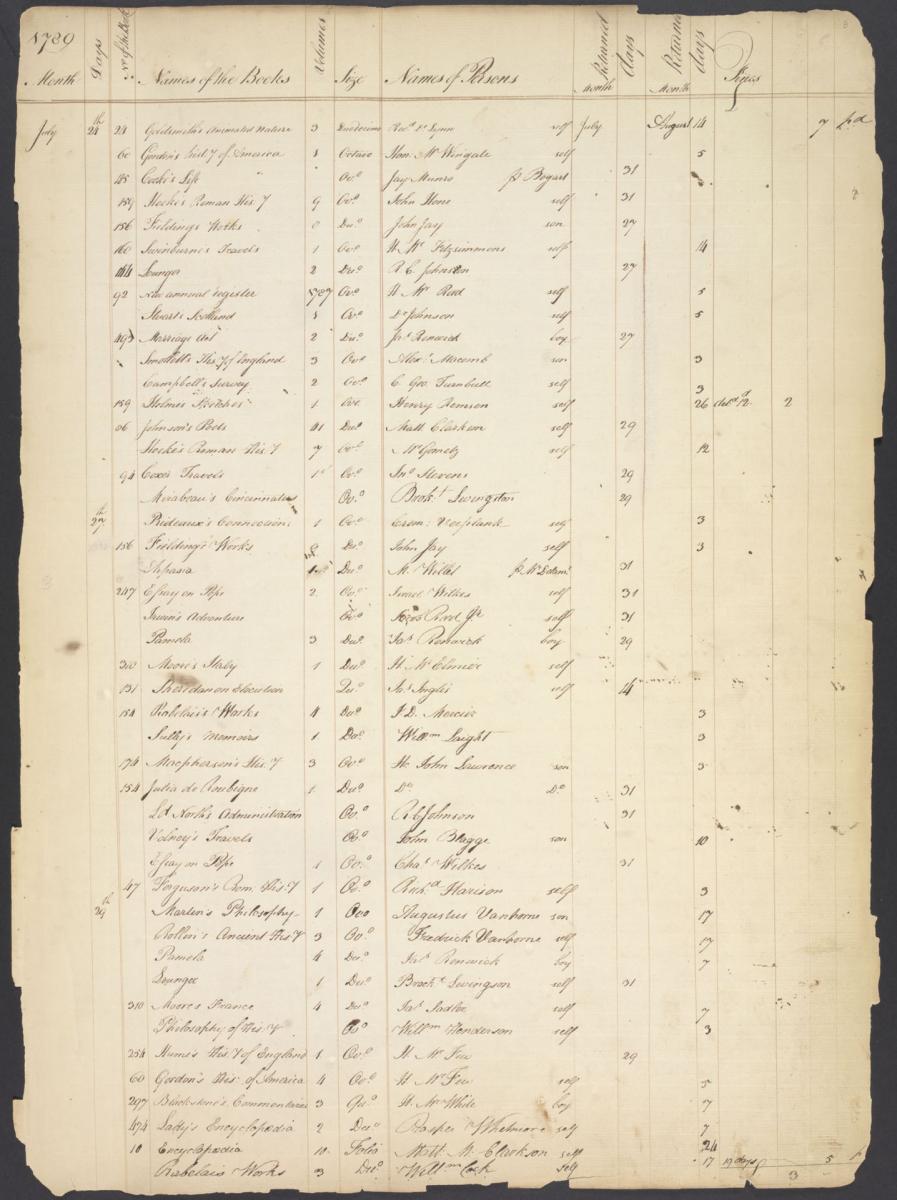 After November 20, 1789, the Library changed to a new system where each member had a page (or in some cases half a page) on which their borrowing history was recorded. This would have made the librarian’s job of checking in returned books much easier, as he would be able to find the transaction in the ledger without having to know the date on which it was checked out. 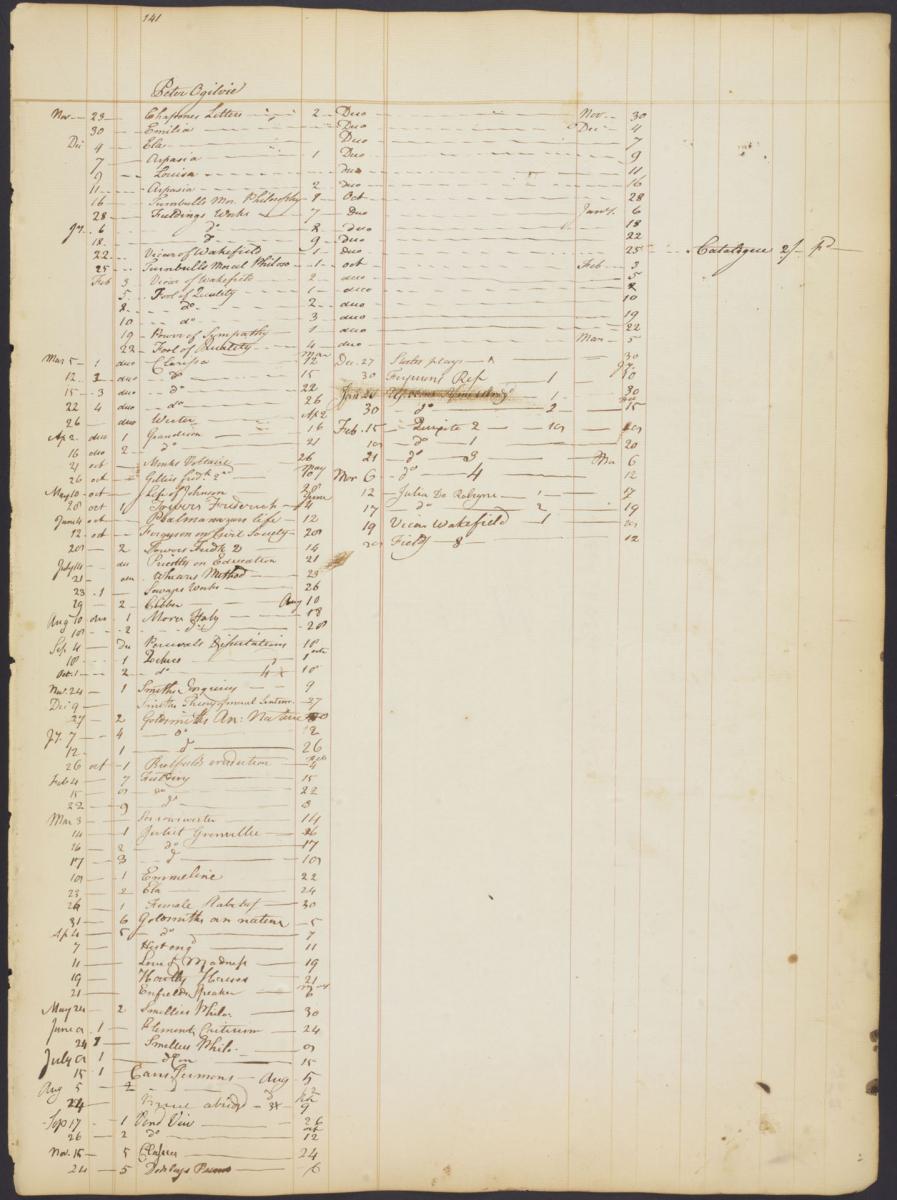 I’ve come across quite a few instances where return dates were not recorded, but the book in question was checked out again—sometimes immediately. This occurred most frequently when the page on which activity was recorded changed between the book being checked out and returned. It appears that after the librarian changed to the person-by-person method of recording circulation, he went back and recorded that some books without checkout dates had been returned—but there are still several books without return dates, and without the “Ret” note, that were yet checked out again. A few examples:

George Washington checked out two books from the Library on October 5, 1789: Vattel’s The Law of Nations and volume 12 of The Parliamentary Register.

There are two book records in City Readers for Vattel’s The Law of Nations. The first record includes the checkout to the president in 1789 and the circulation from 1799 to 1805. The second record, presumably created under the assumption that it must be a different copy based on the lack of a return date for Washington, records the five times The Law of Nations was checked out in 1791 and 1792.

One puzzling thing about The Law of Nations is that, of the six times it circulated during the period of the first ledger, there is no volume number recorded in five instances (suggesting that it was a single volume work), but in one instance John Wells is shown to have checked out volume two. And in 1792 Leonard M. Cutting borrowed The Law of Nations twice, in immediate succession, where the second instance was recorded as “Con.” Does this mean it was a second volume that was checked out following the first? Perhaps. Of the four editions of The Law of Nations that had been published at this point, all were single volumes except for one, a two-volume set printed in 1759. Did we hold both a one-volume and a two-volume edition of The Law of Nations? Or was the recording of volume 2 a mistake? It’s difficult to say, but it appears that a single-volume edition of The Law of Nations circulated in 1789 and at least twice in 1791.

The Library’s early printed catalogs don’t clarify things. A single-volume edition of Vattel’s The Law of Nations appears in the 1789 catalog, but no editions appear in the 1793 catalog. We cannot place the blame for no copies appearing in the 1793 catalog on George Washington, however, since copies were checked out and returned subsequently, yet still prior to 1793.

Given that there are several books that were returned but not properly checked in, and that a single volume edition of The Law of Nations appears to have been checked out more than once after being borrowed by Washington, I see no compelling argument in support of the claim that the President neglected to return this Library book.

The other book borrowed by the President, however, is possibly more interesting. There is no evidence that Volume 12 of The Parliamentary Register ever circulated again, assuming that we have identified the book correctly. (The book was recorded in the ledger as “Commons Debates,” but looking at the Library’s collection at that time, The Parliamentary Register, or, History of the Proceedings and Debates of the House of Commons does appear to be our best bet.) Other volumes of The Parliamentary Register did circulate in 1791, but not volume 12. We actually still have this work in our rare book collection, and it has been identified as the copy that circulated in the 1790s. Two volumes are missing, including volume 12.

Will We Ever Know for Sure?

My investigation has been limited to the information that we have in City Readers, only looking at the two circulation ledgers that have been transcribed and placed online. There are additional circulation ledgers covering the rest of the 19th century, and it’s quite possible that evidence in one of those would give us a better idea of what occurred. In addition to the ledgers, we have many other documents in our institutional archives, for which we now have a finding aid available. As the archives are used, and as more content is added to City Readers, we hope to be able to answer these questions.

What do you think happened? Have I missed a crucial piece of evidence? Let us know in the comments.