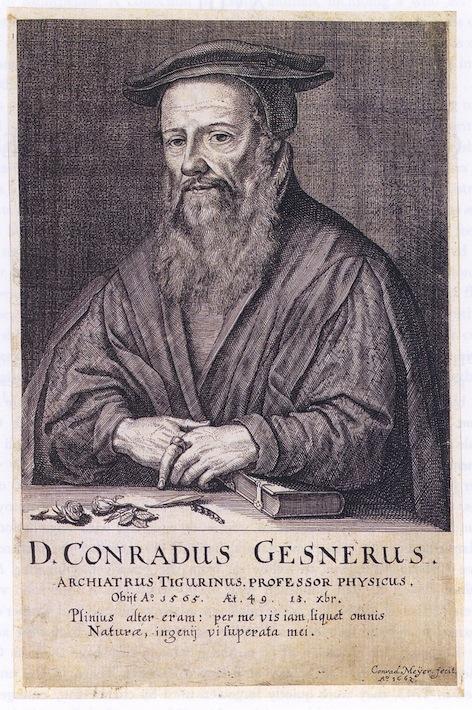 Conrad Gesner (1516-1565) was one of the most tireless information-aggregators of the sixteenth century.  He was distinguished even in an age that knew no shortage of encyclopedic breadth. A physician, botanist, bibliographer, linguist, and more, Gesner fittingly exemplifies the stereotype of the frenetic Renaissance polymath.  The Zurich scholar is perhaps best known for his Bibliotheca universalis or Universal Library (first published in 1545), a massive encyclopedia that stretched to thousands of pages and purported to catalogue all known authors and texts who wrote or were written in Latin, Greek, and Hebrew.  Continually augmented by subsequent scholars following Gesner's death, it remained a standard bibliographic reference work for centuries.  Nor was Gesner hemmed in by the walls that later centuries would erect between the enterprises that we now designate in often-antithetical fashion as the sciences and humanities.  Instead, he applied the same encyclopedic obsessiveness to flora and fauna as he did to books.  His Historia animalium (whose first installment appeared in 1551) catalogued everything from birds and fish to mammals both real and imagined, with a page count that likewise stretched into the thousands.

In addition to these sundry other endeavors, Gesner also published a pioneering work in comparative linguistics, his 1555 Mithridates.  Mithridates had been king of Pontus (now part of modern-day Turkey) in the first century BCE, and legends abounded concerning his prodigious multilingual abilities.  As a result, his name became synonymous with polyglot prowess.  In the subtitle of this book, Gesner advertised the Mithridates as a guide to "the differences of languages (de differentiis linguarum), both ancient and those in use today among diverse nations across the whole world."  In a manner akin to how he cataloged an author's oeuvre or an animal species, here Gesner catalogued languages themselves, describing the origins and character of hundreds of different tongues both historical and contemporary.  As an ideal unit of linguistic comparison, he chose the text of the Lord's Prayer, and so the Mithridates reproduced versions of the Our Father in everything from English to Ethiopic.  Like his many other reference books, Gesner's Mithridates traveled widely.  An example of its impressive circulation is found in a heavily annotated copy from the Society Library's Winthrop Collection currently on display in our exhibit, Readers Make Their Mark.

The Library's copy of Mithridates possesses an illustrious and intriguing history.  This copy was owned by Adam Winthrop (1548-1623), who filled many of the books in the Winthrop Collection with copious and learned marginalia.  Adam read Gesner in England sometime before his death in 1623, but the book made its way across the Atlantic when his son, the future Massachusetts governor John Winthrop (1587-1649), and grandson, the future Connecticut governor John Winthrop Jr. (1606-1676), settled in the New World.  It is one of the most fully annotated of Adam Winthrop's many annotated books, and hence offers unparalleled insights into his methods as a reader.  More specifically, it demonstrates the extent to which Adam digested books and languages alike through the encyclopedic methods of his day, approaches akin to those that Gesner himself had helped spread across Europe, and which John Winthrop Jr. would employ after he transported the Winthrop family library to New England.

First and foremost, Adam placed Gesner's text in dialogue with other sixteenth-century scholars who also pursued the encyclopedic study of language.  For instance, when Gesner discussed the tale of the monarch Mithridates, Adam added a cross-reference to a similar discussion of the famous ancient polyglot by another pioneer of early modern comparative linguistics, Theodore Bibliander (1509-1564).  Where Gesner quoted the Vergil commentator Servius' observation that Greek was older than Latin, Adam added that Guillaume Postel (1510-1581), one of the sixteenth-century's more colorful language theorists, had affirmed the same thing. 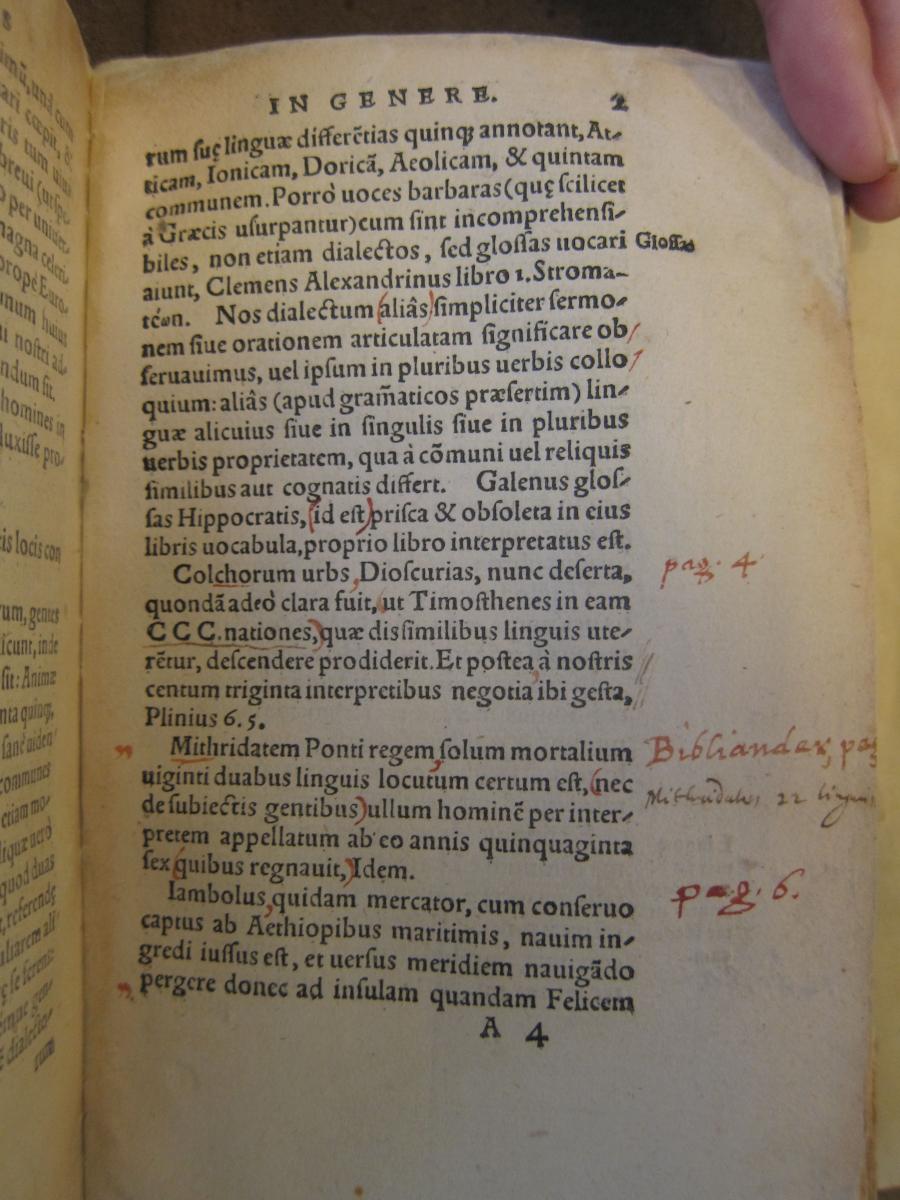 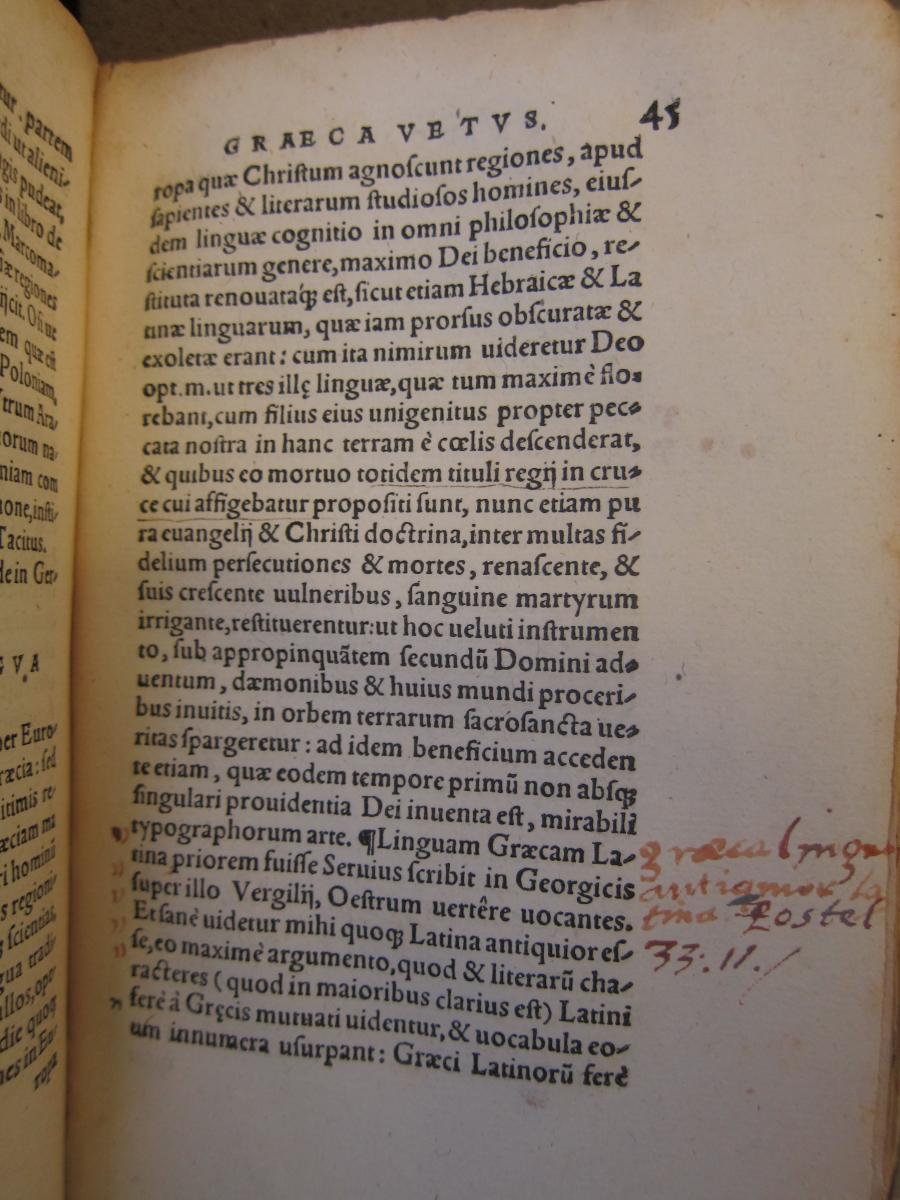 A French scholar of irenic disposition, Postel had written extensively on both Hebrew and Arabic, while also acquiring notoriety for his mystical visions (indeed, Postel's career bears many similarities to that of John Dee, the Elizabethan scholar/mystic who became an object of obsession for John Winthrop Jr.).  When annotating Gesner's index, Adam also mined Postel for information on worlds far distant from his home in England.  For instance, next to Gesner's entry for the language of the Muscovites, Adam added a reference from Postel to those Eastern Orthodox Christians known as Jacobites, with accompanying page number.  Based on the specific pages of Postel that Adam cited, it appears as though he read the Mithridates alongside Postel's treatise De Foenicum literis, seu de prisco Latinae et Graecae linguae charactere, eiusque antiquissima origine et usu (On Phoenician Letters, or the Ancient Character of the Greek and Latin Language, and Their Most Ancient Origin and Use).  Adam's copy of this book has yet to be located. 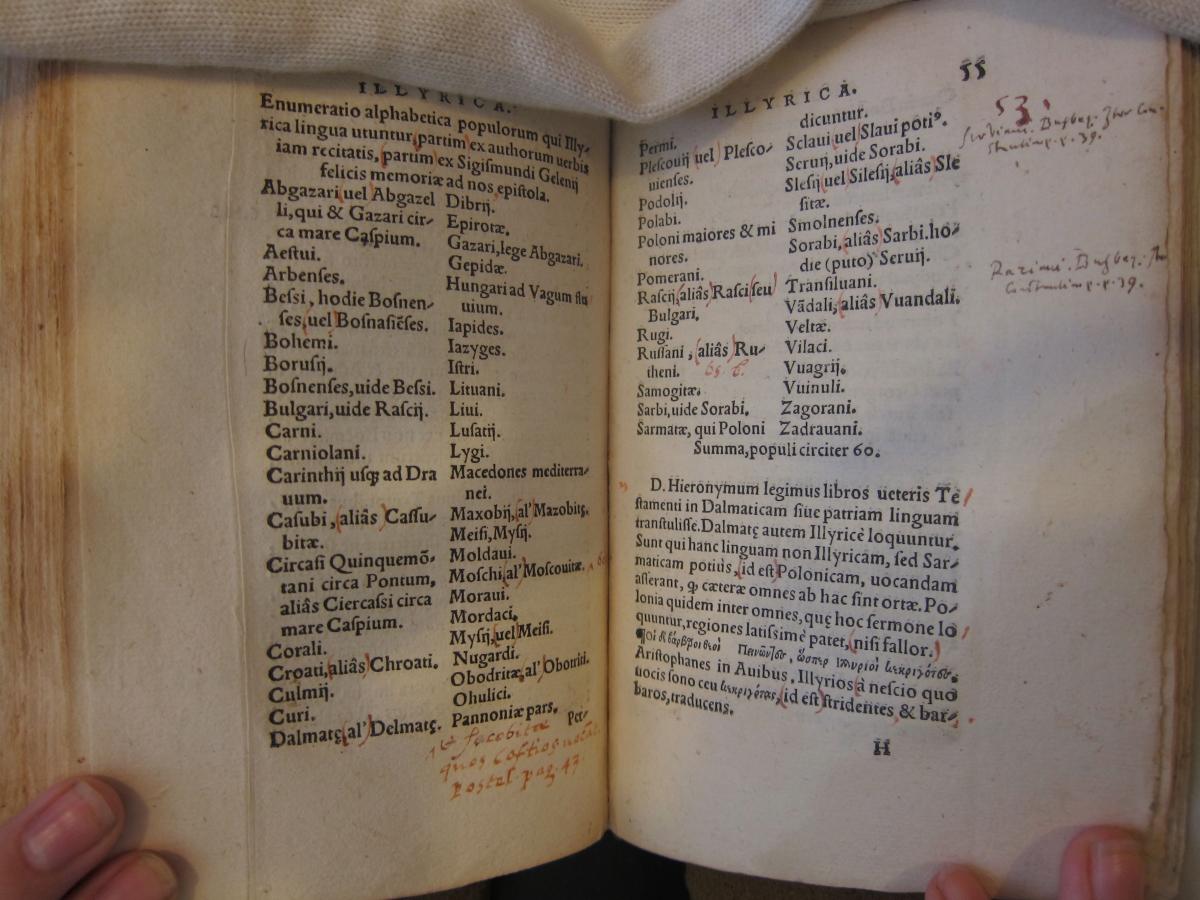 Elsewhere in the Mithridates, Adam focused on languages closer to home.  For instance, he paid due attention to the Zurich scholar's treatment of his own native tongue, flagging where Gesner pronounced English "the most greatly mixed and corrupted of all languages today."  Some of Adam's most copious notes appear next to Gesner's entry for Irish.  Here he constructed his own miniature Latin-Irish lexicon in the margin, copying out the Irish words for such terms in the Lord's Prayer as "father," "son," "bread," and the like, along with their Latin equivalents. 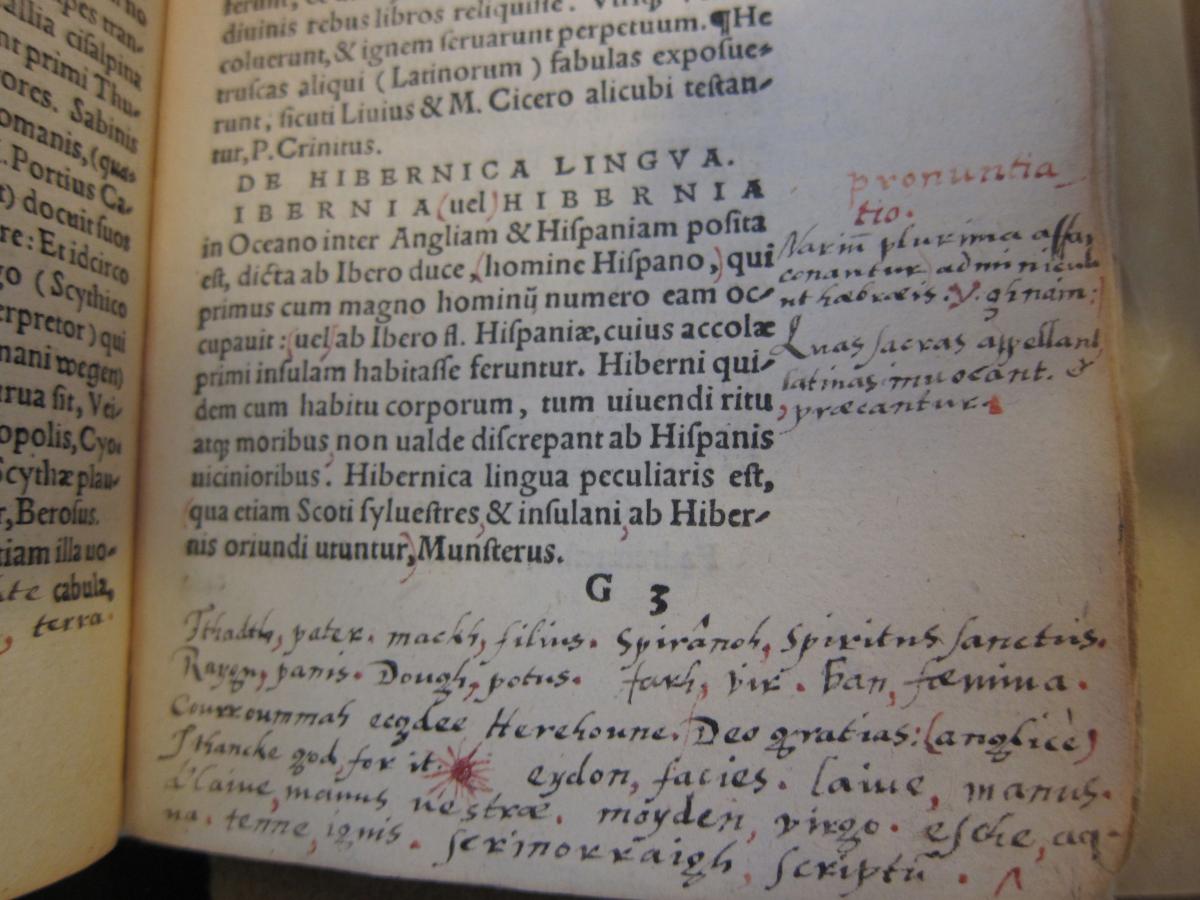 One of the most remarkable signs of Adam's wide reading is found in a cross-reference he added to the Tishbi, a lexicon of terms from the Talmud and Midrash written by the Italian Jewish scholar Elijah Levita (1469-1549).  Levita had collaborated with the German Protestant Hebraist Paulus Fagius (1504-1549), who printed several of his works and translated them into Latin.  Adam appears to have been especially interested in Fagius' work as a translator of Hebrew into Latin: among the other items in the Library's Winthrop Collection is a copy of the Book of Tobit with Fagius' translation, although unfortunately it lacks marginalia. 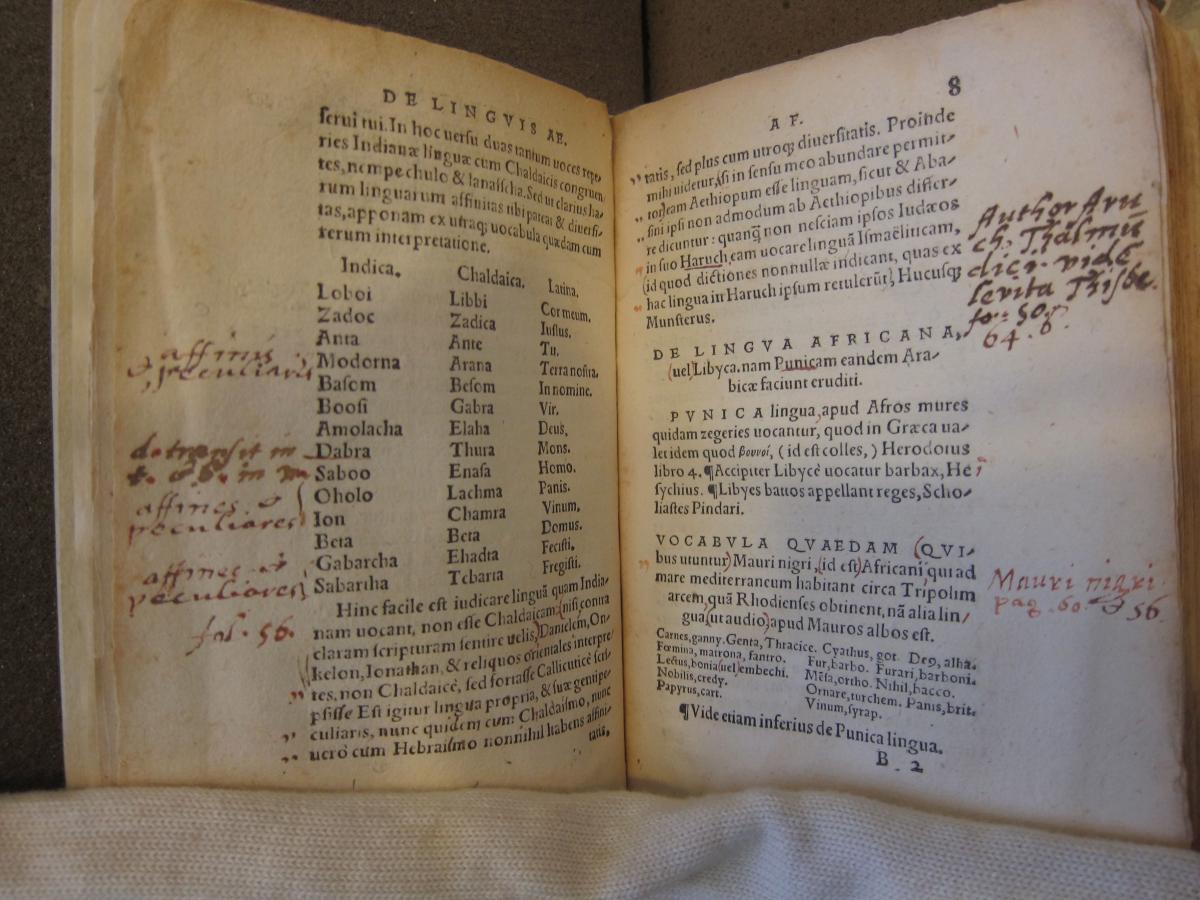 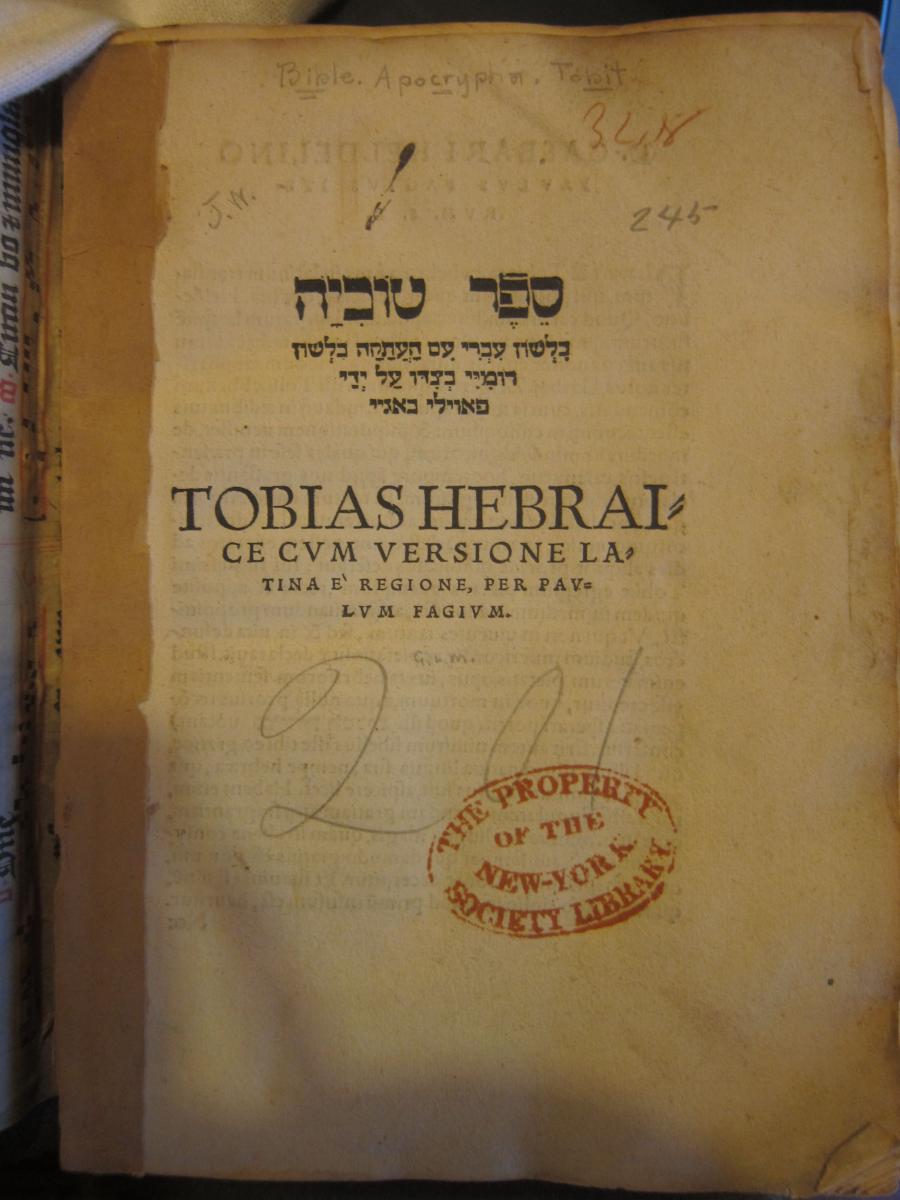 Finally, in order to understand the world's sheer diversity of languages still further, Adam turned to perhaps the most important example of sixteenth-century multilingual encyclopedism: the Antwerp Polyglot Bible produced by the Spanish biblical scholar Benito Arias Montano (1527-1598) and published by the famous humanist printer Christophe Plantin (1520-1589).  The Antwerp Polyglot featured versions of the biblical text in Hebrew, Greek, Latin, Aramaic, and Syriac, and its extensive prefatory matter and commentary included a wealth of erudition on languages both ancient and modern.  In detailed and meticulously neat notes, Adam inserted excerpts from Montano next to Gesner's entries for Spanish and Italian.  In his entry for Italian, for instance, Gesner had declared that the language was comprised of numerous regional dialects, and so - with the aid of Montano - Adam enumerated many of these, including Genoese, Lombard, Tuscan, Neapolitan, Piedmontese and others. 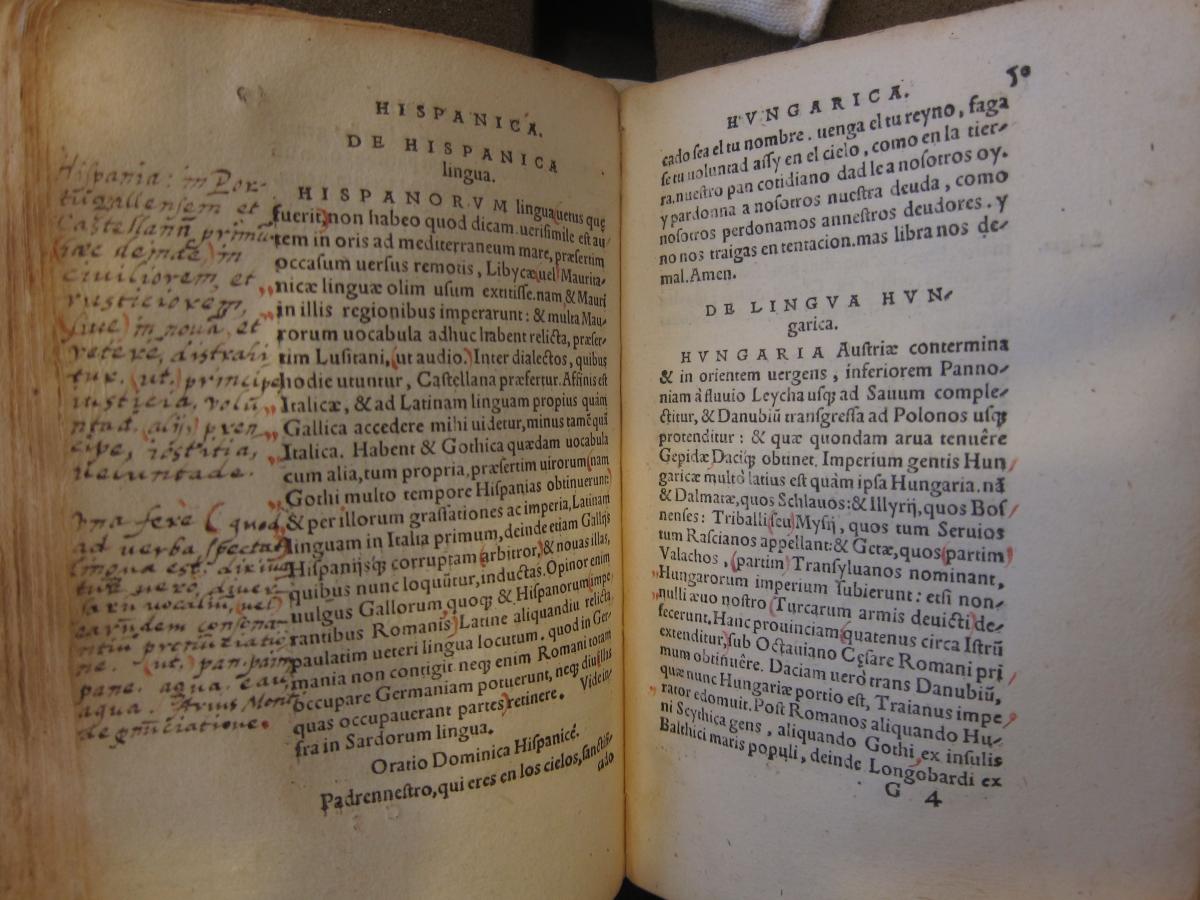 When reading a treatise on the diversity of languages, Adam Winthrop augmented it with linguistic erudition from a similarly diverse range of sources, all of which exemplified the encyclopedic impulses of Renaissance scholarship.  As he read the work of a Zurich bibliographer on his estates in England, Adam used his margins to place one latter-day Mithridates after another in conversation, from an Italian Jewish lexicographer and an irenic French mystic to a Spanish Catholic working in the Low Countries.  As Adam demonstrates, Renaissance readers did not digest the great encyclopedic projects of their age in a passive fashion, but rather united them in new and unexpected combinations.  And just as Adam carried on the legacy of Gesner and others, long after their deaths, so his descendants would continue to emulate the practices of erudition that Adam left behind in his margins, as they transported his books across the Atlantic and gave them a new home in New England.