Herman Melville at the Society Library

Herman Melville (1819-1891) was an on-again-off-again member of the Society Library thoughout his adult life. In January 1848 he bought his first share from his neighbor and friend, the critic George Duyckinck (who purchased the same share from Jedidiah B. Auld), but sold it back to him that September. Nineteen months later, in April 1850, Melville bought a new share from Horace Gray Jr. His brother, Allan, bought a share form Maurice Leyne at the same time, and both Melvilles sold their shares (to Thomas Alsop and J.B. Curtis, respectively) in the fall of 1850 when they moved from New York to Pittsfield, Massachusetts. But the story does not end there: Herman Melville became a member again thirty-nine years later, when his wife Elizabeth's cousin Ellen Marrett Gifford bequeathed her share in the Library—free from all annual payments— to her friend Herman. Melville, again a resident of New York, borrowed books on this share until his death in 1891 when it passed on to Elizabeth, and, after her death, to their daughter Elizabeth Thomas. 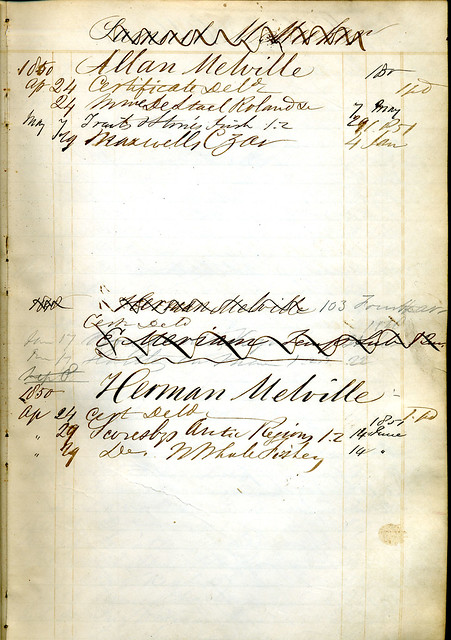 Melville's New York is very much a story of the author and his hometown, and the Library's role in it is an important one. When Elizabeth Melville described the couple's daily routines in a letter to her stepmother in 1850, she noted that Herman would spend part of the evening in the reading rooms at the Society Library "going through the papers." The Library also provided him with access to the texts he relied on when writing Moby-Dick. One of these, An account of the Arctic regions with a history and description of the northern whale-fishery by William Scoresby (now on display in the Peluso Family Exhibition Gallery), went with him from New York to Pittsfield, and evidence of Melville's use of this two-volume work appears in both the text of the novel and the preferatory "Extracts (Compiled by a Sub-Sub Librarian)." The Library's circulation records from this period illuminate another important aspect of Melville's New York story: his relationship to his local audience. Herman Melville was arguably devastated by the loss of his audience with the publication of Moby-Dick in 1851. The Society Library's records bear this story out: our members' demand for his books kept them in constant circulation, and our acquisition records show that we needed to buy new copies of books like Omoo to keep up with the demands of our readers. Moby-Dick, however, was not so well loved by readers at the Library. The book circulated just eighteen times between 1851 and 1854. By comparison, White Jacket, a fictionalization of Melville's service in the US Navy, went out twenty-five times during the same period, and Omoo circulated eighty times in the three year period between 1847 and 1850. Those aren't great numbers.

Our circulation records not only tell us about Melville's popularity; they also tell us exactly who borrowed his books.  In the exhibition gallery, an installation gives the names and, when available, contemporary occupations and addresses for Melville's readers, and connects them to the Melville novels they borrowed between 1847 and 1854. Contemporary directories show us that Melville's readers worked and lived in the same places he did: business was done around Wall Street and the waterfront, and family life centered around Washington and Union Squares.  Melville and his readers also had similar tastes in literature (for more about Melville's reading, see Melville's Marginalia Online). Melville’s readers also borrowed novels by Dickens, Hawthorne, Cervantes, Dumas, Scott, Thackeray, and James Fenimore Cooper, and read poetry by Pope and Longfellow. They checked out nonfiction, as well—Ruskin’s Seven Lamps of Architecture and Modern Painters and Pepys’s Diary frequently appeared in the charging ledgers during this period. In short, when we look at the demographic data in contemporary directories and at the other books checked out by Melville’s readers in New York, a picture emerges of educated professionals with wide-ranging reading interests but with an emphasis on literary and popular fiction—not so different from our members today.

Herman Melville's New York is an exhibition that aims to reframe this small part of a beloved author's story so that new narratives about his life might emerge in the minds of his readers today.  We hope you'll visit the show and share what you discover. Tag #Melville1850 on Facebook or Twitter and let us know what you think.


The Library is closed on
Saturday, July 3 and
Sunday, July 4
for Independence Day.