A History of the New York Society Library's Bookplates

The Library's bookplate is ubiquitous in this building, so much so that most of us probably don't notice the image on the inside front cover of our books anymore.  But we've gone through three different designs since the Library opened in 1754, and it's worth taking a closer look to see how these prints - which, after all, identify Society Library books as ours - help to document part of the Library's history not only as a cultural institution, but also as a hub of social and cultural life in New York City during the 18th century.

The first mention of the Library's bookplate appears in an undated entry in the Library's first minute book, probably written in late 1757 or early 1758.  The minute reads: 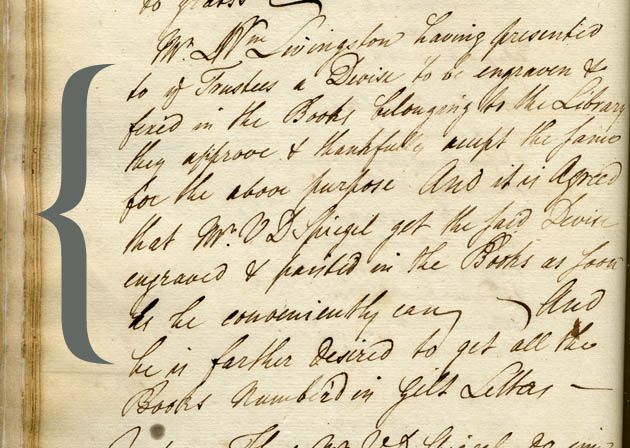 Mr. Wm. Livingston has presented to the Trustees a Devise to be engraven & fixed in the Books belonging to the library they approve & thankfully accept the same for the above purpose.  And it is agreed that Mr. V D Spiegel get the said devise engraved & painted in the Books as soon as he conveniently can.  And he is farther desired to get all the Books number'd in gilt letters. 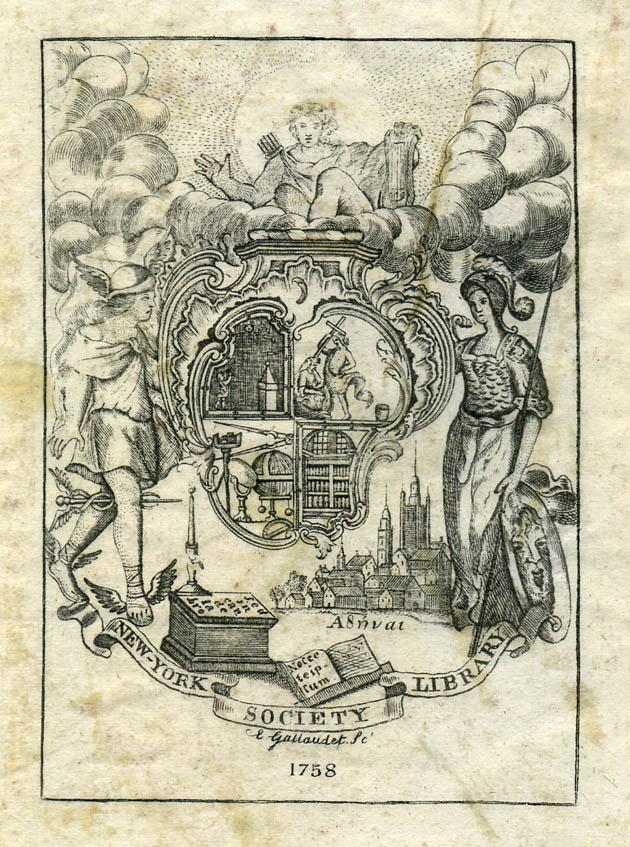 The design of the Society Library's first bookplate is typical for its time: the then-popular Chippendale armorial form features a rococo cartouche filled with symbolic imagery. In place of a heraldic device, however, the armorial in the Library's bookplate represents the areas of learning the Library intended to support: religion, navigation, liberal arts, astronomy, and geography. The library interior may even depict the space of the Library itself, housed in what was then City Hall. An urban landscape labeled “Athena” sits below the cartouche, alluding to early New York as an ideal city (they were on to something!), and the Greco-Roman deities Mercury (left), Minerva (right), and Apollo (above) attend the scene. A closed chest with the words Sed in candelabro (but by candlelight) rests beside Mercury, and a smaller book labeled Nosce teipsum (know thyself) is nearby.  Referencing the Classical world and the tools of the Enlightenment, the Library's first bookplate speaks to the relationship between the Library in the New World and the values of the learned, civilized Old World in Europe.

The accounts kept in the back of the first minute book contain a receipt (this section was too fragile to scan, scroll down for an idea of what the receipts look like) stating that Elisha Gallaudet (1728-1779)  was paid £3 10d on July 26, 1758 "for engraving a copperplate for the N. York Library."  Gallaudet was one of only a few engravers working in New York at this time, and like his competitors he was a metalworker with a variety of skills in addition to engraving.  Gallaudet is probably best remembered today as the metalworker who cast the mold of the 1776 Continental Dollar.  A second receipt records that Gerardus Dycking was paid £3 13d "for striking off one thousand impressions from copper plate and paper."

I presume that the plate, which would have been printed until it was completely worn out, was lost during the Revolution when the Library closed temporarily.  When it reopened in 1789, Samuel Boyd hired Peter Rushton Maverick (1755-1811) to engrave a replacement.  This receipt for the new plate survives in our archives, stating that Maverick obtained the necessary materials, engraved the design, and printed 1,400 copies of the plate for £11 7d. A note signed by Boyd and witnessed by fellow member Samuel Jones on the verso of the receipt verified the commision. 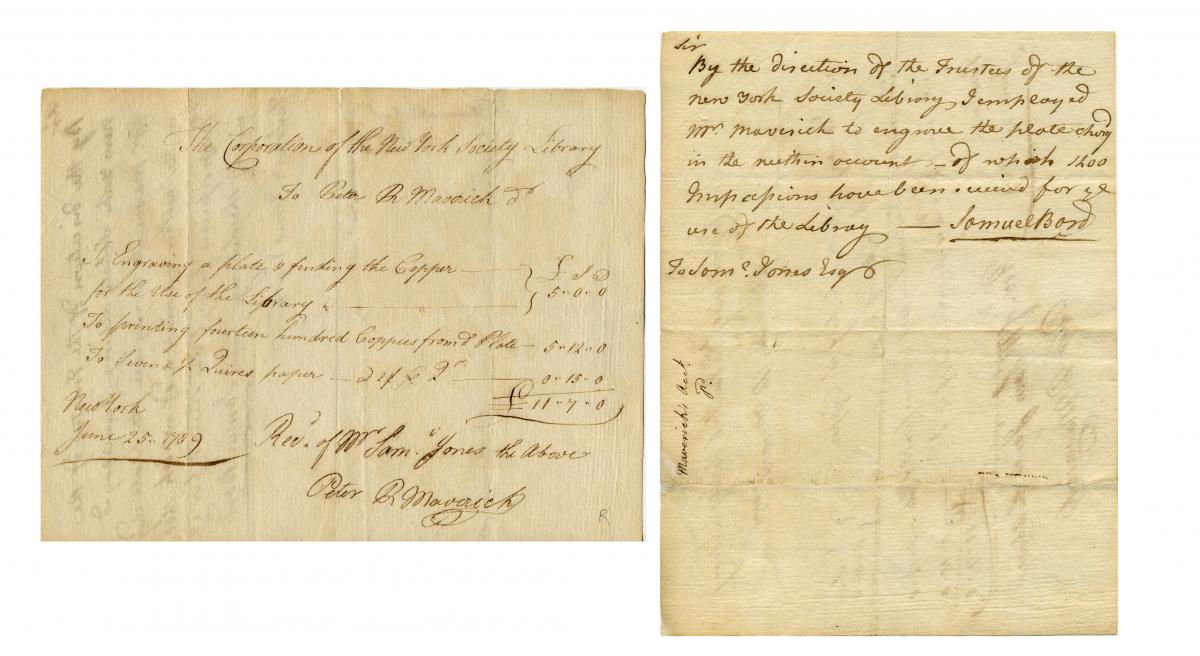 Peter Rushton Maverick was a well-known New York engraver (a contemporary of Gallaudet) and Library member; he engraved illustrations for books, and engraved booksplates for several library members, including William Smith Livingston, John Pintard, and Brockholst Livingston, whose bookplates are pictured below. 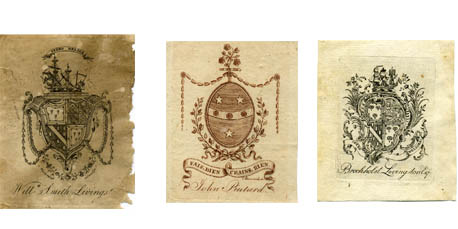 Like Gallaudet, Maverick earned a living with a diverse set of skills: Mantle Fielding's Dictionary of American Painters, Sculptors, and Engravers cites contemporary newspaper advertisements in which Maverick listed engraving, seal sinking, metal engraving (for tableware) and copperplate printing among his talents.  He also made the Library's seal in 1790 (he was paid £5 14d for it, according to the receipt pictured below); Head Librarian Mark Bartlett continues mark official documents such as Library shares with it in accordance with the Library's Bye-Laws. 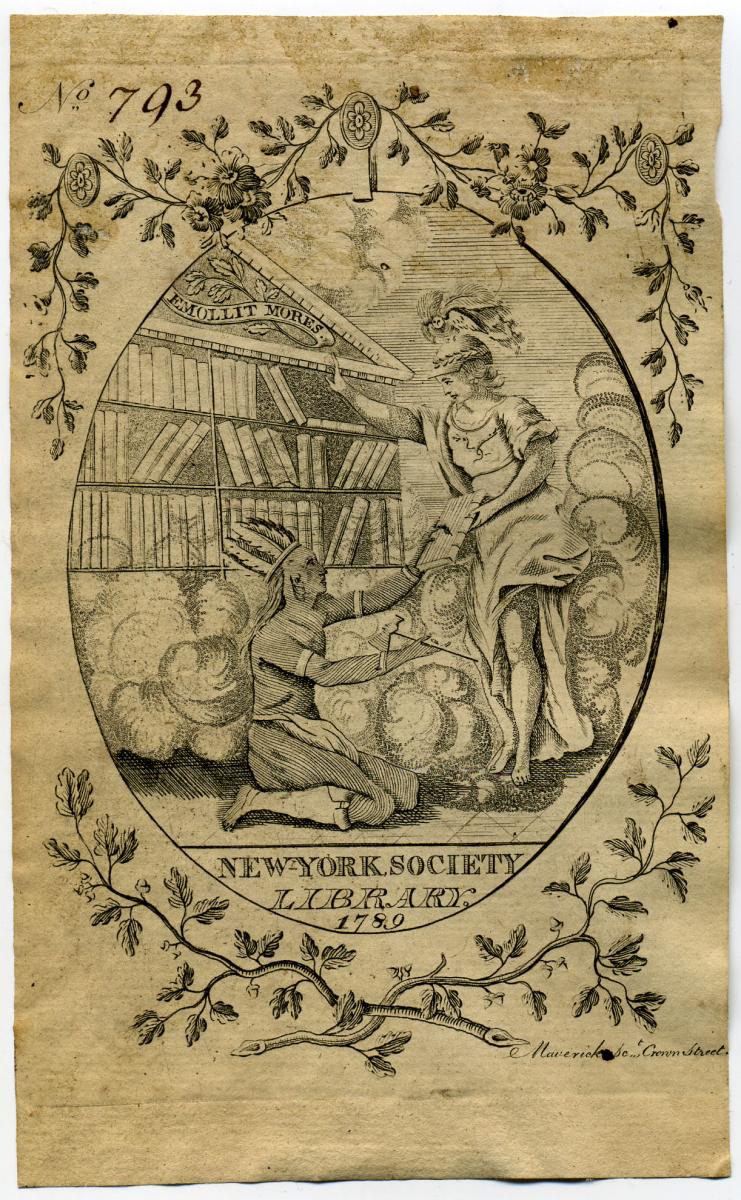 The Library's second bookplate (pictured left) differs tremendously from the first, which relied on the visual language of antiquity and learned western culture to tie the early American Library (and by extension, its membership) to European civilization.  The second plate addresses the American continent and its cultural and geographic distance from Europe more directly by depicting a Native American kneeling in front of Minerva, exchanging his hatchet for a book; the Library's seal (pictured below) features a condensed version of the same design. The same design (with some minor alterations) was used again in 1796 for the Library's third bookplate, (more on this plate shortly), which remained in use for nearly two centuries as the Library's mark of ownership.  The maxim Emollit Mores, roughly translated as "learning humanizes" or "learning softens character," appears above the bookshelf, suggesting that the book will "civilize" the native reader.  This antiquated and paternalistic view of colonization expresses the attitude of European settlers like the early Library readers toward the cultures they encountered in the New World, but is is most certainly not an appropriate representation of the Library or its purpose today. Today, we use a reproduction of the Livingston's original design. 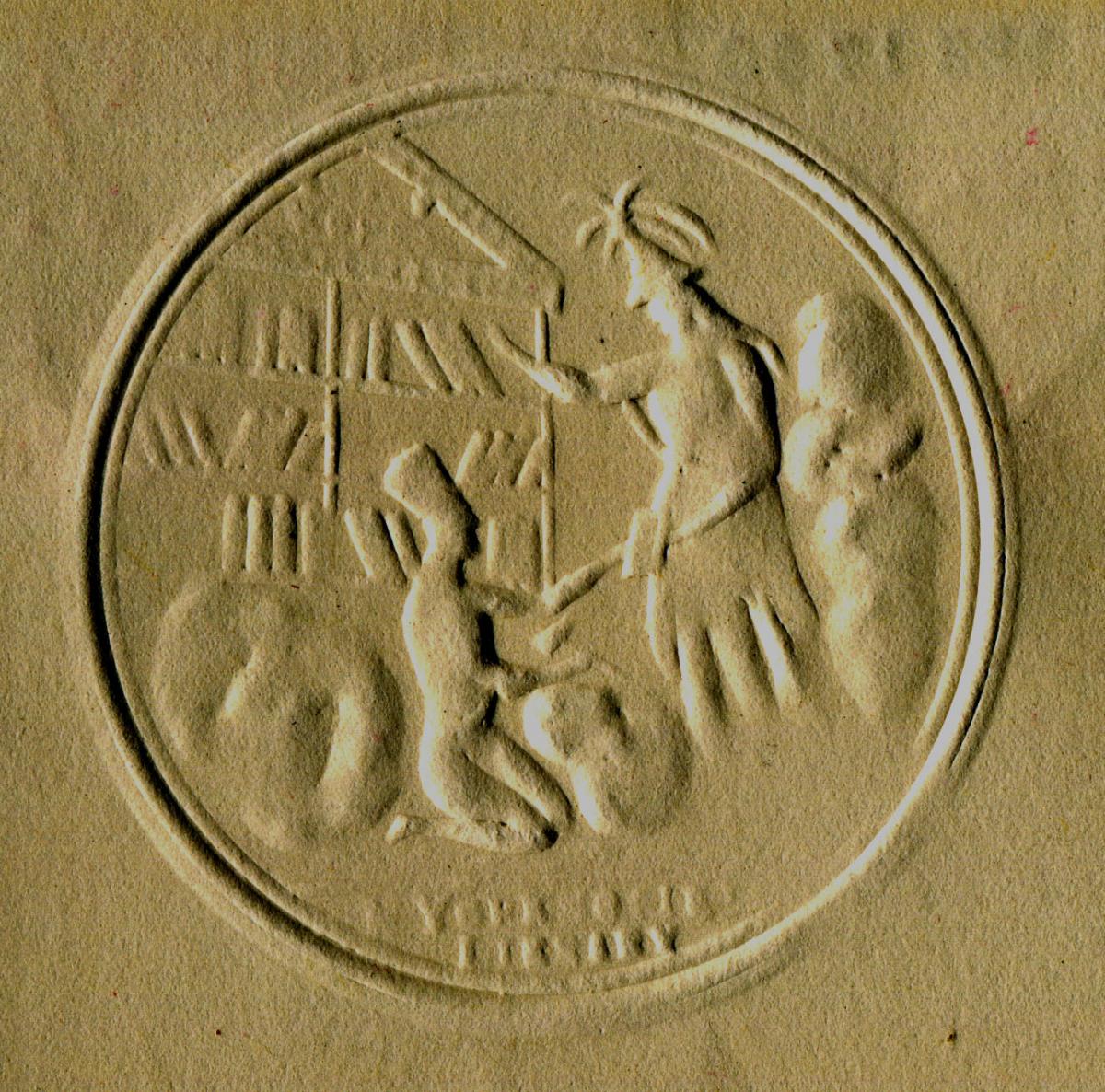 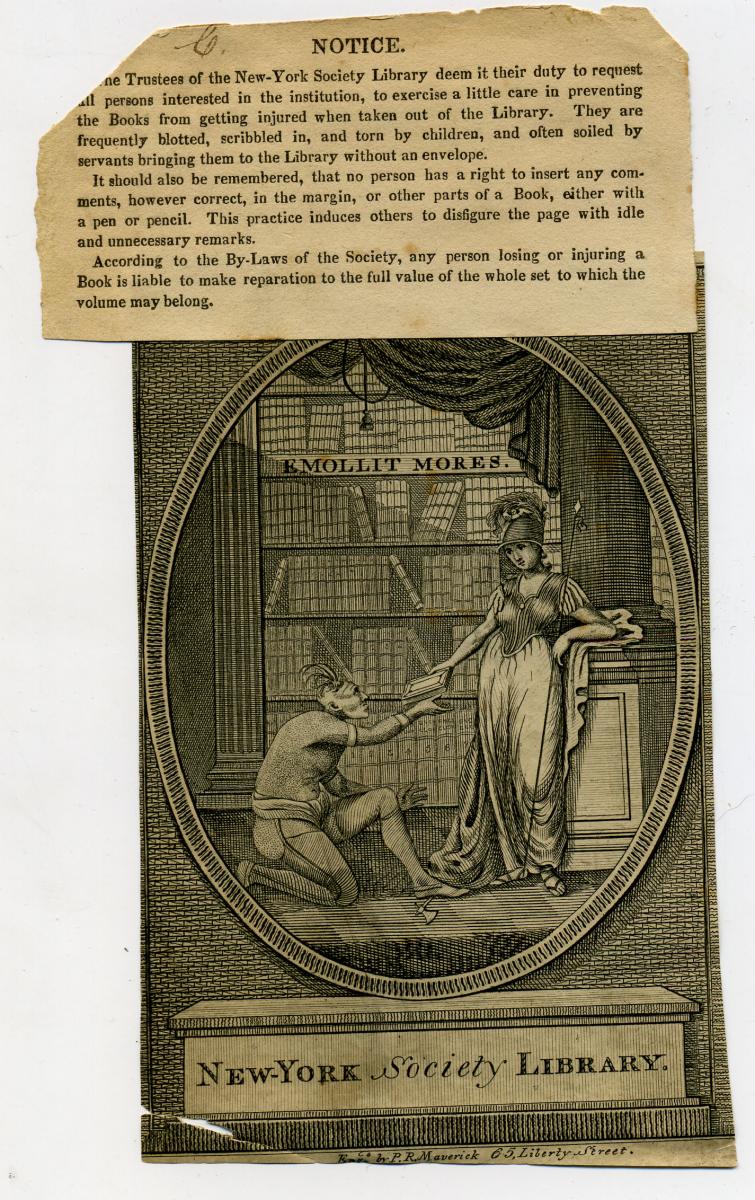 The Library's third bookplate (right, with a later printed notice advising readers to care for their books) was engraved by Maverick in 1796, and represents his shift into maturity as an engraver and artist.  A receipt in the Library’s archives shows that the image for the third plate was designed by the brothers Archibald and Alexander Robertson, trained artists who left Scotland for America in the late 18th century.  Like the other bookplates pictured above, the 1789 plate shows limited use of tonal effects such as hatching and crosshatching, and the figures and objects are unskillfully rendered; the composition looks flat and the figures and furniture appear weightless, floating untethered in space. Executed by Maverick just seven years later in 1796, the Library’s third bookplate is leagues ahead of its predecessor. Light and shadow are clearly expressed, and the figure of Minerva stands in contrapossto. Both she and the Native American figure convincingly inhabit the space of the Library interior, rendered realistically in perspective. 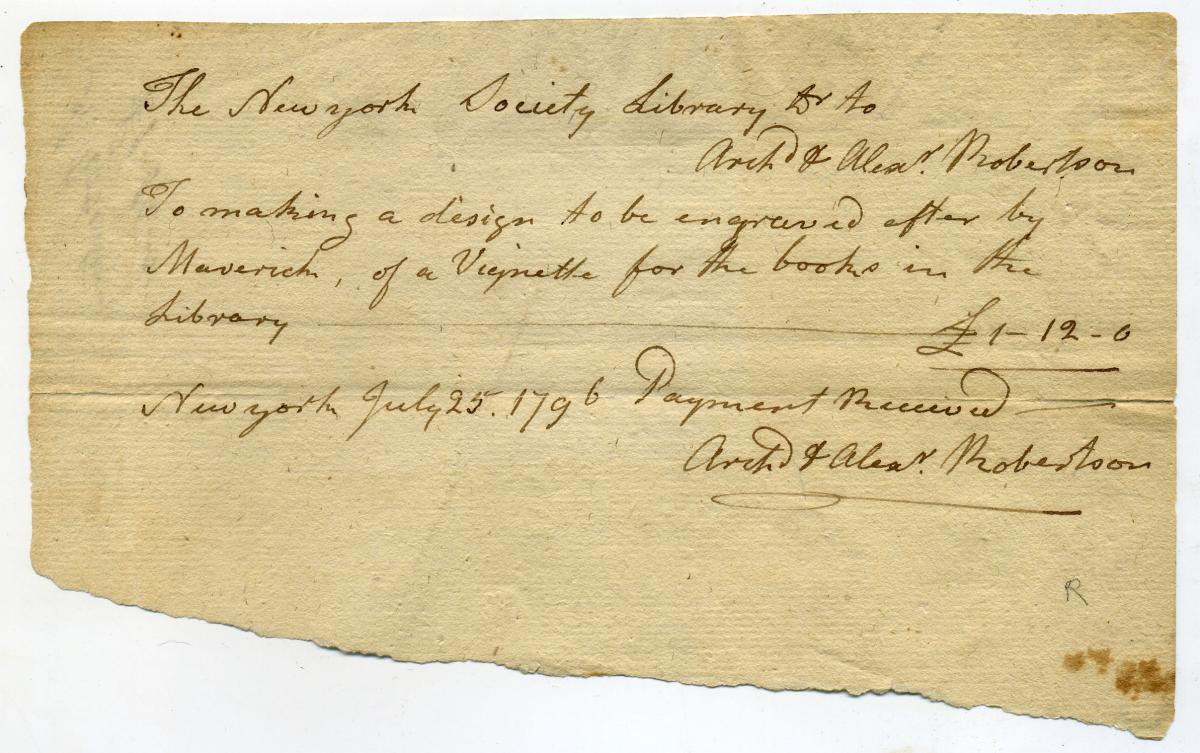 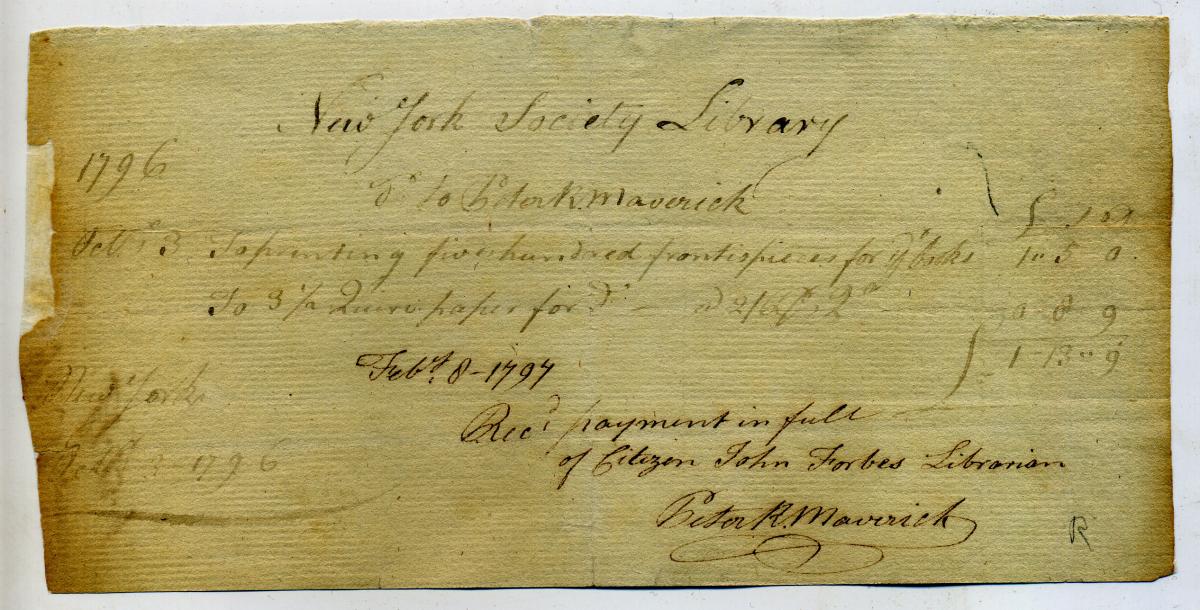 Both Robertsons were Library members, and together they founded two art schools in New York City, the American Academy of Fine Arts in 1792 and then the Columbia Academy of Painting at 89 William Street in 1796. Did one of the Robertsons design the 1789 bookplate (Alexander was borrowing books in September 1789) in addition to the commissioned design in 1796?  Maverick and Robertson worked together at least four times more, with the former engraving designs by the latter in the early 19th century. Did Maverick study with the Robertsons, who were engravers themselves, learning more advanced drawing and engraving techniques?

We may never know the answers to these questions with Maverick and the Robertsons long dead, but the bookplates themselves and the documents surviving today in the Library's archives hint at connections between individuals that would otherwise never come to light.  Perhaps what I enjoy most about this kind of speculation is the supporting role the Library plays in historical inquiry into the lives of the relatively unknown: three names coincide on paper in print, and manuscript, and we imagine face-to-face encounters that took place over two and a half centuries ago.