The Library's City Readers is a unique research tool, providing public access to hundres of reader histories from the Library's archives.  New Yorkers such as John Jay, Dewitt Clinton, and Sarah Livingston come to light in new ways when considered through their careers as readers.  In tracing the books each person read over time, one gains perspective on individual tastes in literature, and reading habits for study, business, or pleasure.  Tracing books from reader to reader, one can even begin to form ideas about networks of exchange between members of a literary community in New York during the late 18th century.  But what about the Library as an institution, and its members viewed as a group?  What was a typical day (or week?) like at the Library in the summertime 222 years ago?

To get an idea of what the space of the Library might have been like in the late 18th century, I collected all of the records for transactions that took place during the month of July, 1791.  Was it a busy place?  Were some days typically busier than others?  Who were the heaviest users?  Here are a few of the most telling numbers:

In July of 1791, the Library was open 7 days a week, a practice which began sometime in 1790.  That the Library was open to readers on Sundays was highly unusual during a time when everyone was expected to attend religious services every week.  The Library Company of Philadelphia, for example, was open "every day, (Sundays excepted), from two o'clock P.M. until sunset" beginning in 1807, according to their catalogs.  Prior to that date their collection was available to readers on Tuesday, Thursday, and Saturday for 5 hours per day.

Probably because most readers were at Church on Sunday, this was always the slowest day at the Library, with 10 or fewer members checking books in and out.  The exception that made the rule was Sunday the 31st.  Twenty-five readers completed 31 transactions, with 27 books checked in and 4 books checked out.  Unusual borrowing activity like this may be an indicator of events either within or external to the Library.  On Monday, July 4, for example, the Library had only one reader, Isaac Gomez; other Mondays that month recorded an average of 21 readers.  Contemporary newspapers, like the Daily Advertiser, show that the Tamany Society put on a parade celebrating the 15th anniversary of American Independence.  Several members, including Aaron Burr, were active in the Tammany Society, while others were members of Alexander Hamilton's competing Society of the Cincinnati.  The parade was followed by a sermon by Library member William Linn, who checked out books at the Library on the following day along with 31 other members.  Studying local newspapers and Library transactions in tandem, one might also come to see how activity at the Library reflected ongoing social, political, and cultural affairs in the City.

It's important to note that Library members (and possibly even non-members) may have been visiting the Library more frequently than the Ledger records, so while such statistics are certainly informative, they are not representative of all of our member's reading, or even all of the Library's daily activity.  The same is true of circulation statistics today.  Many of our members use our space for reading, writing, and research, but rarely check books out for use at home.  Seventeenth century members may have done the same, though a study of the space used by the Library at that time may shed some light on whether or not this practice was feasible.  At this time, the Library was located in "the uppermost room in the south east part" of Federal Hall (renovated after the Revolution by Charles l'Enfant, who planned Washington DC), on Nassau at Broad Street.  A plan of the room, unknown to me at present, might indicate whether or not there was space for signifcant individual or group reading within the Library chamber.  (For an interesting study of reading spaces in England, see James Raven, "From promotion to proscription: arrangements for reading and eighteenth-century libraries," in The Practice and Representation of Reading in England.  New York: Cambridge University Press, 1996.)  Recent scholarship has also shown that eighteenth century readers frequently had access to reading material from more than one source, suggesting that some of our members may have used the Library as one of several points of access to books.  Bearing this in mind, we cannot work from the assumption that the Ledger records every visit made by a member to the Library, or that their circulation records reflect the breadth of their reading at any point in time. 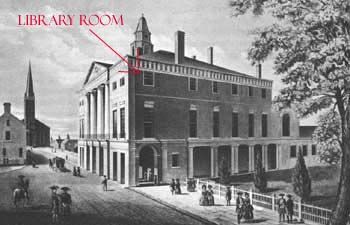 Even if eighteenth century readers used the Library more frequently than the Charging Ledger records, it is clear that at least in July 1791, Fleming, Edgar, and Masterton far outpaced their fellow member-readers, who checked out a fraction of the books they did.  Did all of these men own multiple shares?  Were the books they checked out meant for use by the entire family (reading aloud was a common practice at this time), or by individual members of the household?  The Library still offers household memberships today, and current statistics show that our high-volume readers may be reading about as much or even more than Fleming, depending upon whether or not his borrowing history represents a household or individual reader.  Today, our heaviest readers are adults with household memberships, checking out an average of 36 printed and audio-books per month between two people, based on annual statistics.  (Thanks to Patrick Rayner, Head of Circulation, for this information!)

Broader studies of borrowing activity at the Library put individual readers' records into perspective, and point toward trends in habitual reading practices of sophisticated, urban readers in New York City.  Records of borrowing activity also allow us to deepen our understanding of the way the Library functioned as a social and cultural center, well beyond what we can learn from the biographical details and political affiliations of its membership.  A longer study might examine patterns among documented readers, tracing individuals who may have consistently visited the Library in pairs or formed reading groups of some kind.  Surviving diaries, like John Pintard's and others held at local institutions like the New-York Historical Society can help to fill in some of the qualitative details that were not recorded in the Library's Charging Ledgers.

As New York City's oldest cultural institution, the Society Library's Charging Ledgers have much to offer as a tool for better understanding the way that New Yorkers lived with books at one of the most interesting moments in New York City's history.  Perhaps the beauty of the resource is that everyone sees the data differently, drawing new conclusions and enlivening the historical dialogue.  What will you discover?

This article was updated in January 2016 with links to City Readers, a database offering access to the circulation records originally published on the Library's website as the Early Circulation Records project. You can view the original pages from which this post was written in the Internet Archive's Wayback Machine.