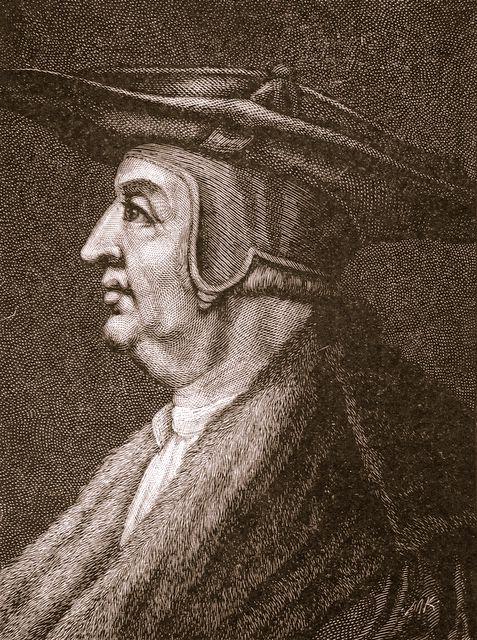 Konrad Peutinger loved to read. A lawyer by training and a scholar by inclination, he lived in the German city of Augsburg from 1465 to 1567. There he built up a huge collection of books. With more than 10,000 individual titles bound in some 2,200 volumes, it was the largest library north of the Alps, rich in both printed books and manuscripts. Peutinger amassed a huge professional library of books on Roman law, but he also put together a second, more eclectic collection that included historical and literary works of all kinds. Hundreds of his books remain in Augsburg State and City Library, and lists make it possible to reconstruct the library more or less as a whole. 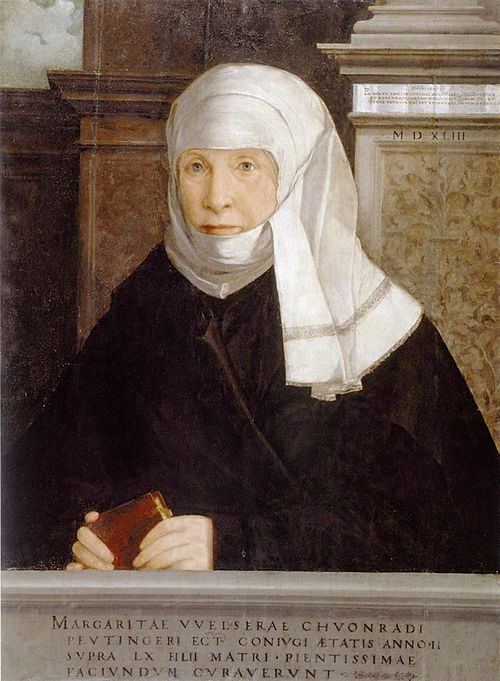 Unlike many great collectors, Peutinger made a habit of reading his books, pen in hand. A pious man, he studied the New Testament with his rich and pious wife, Margarete Welser, whose fortune supported his book-buying habits. When the two of them were puzzled by the way their good friend Desiderius Erasmus had translated a particular verse, they wrote to him together to ask for an explanation.

But Peutinger's special interest as a reader lay in history. He bought every historical work he could. He transcribed ancient Roman and medieval inscriptions on stone, which, as he saw, could supplement the information provided by histories and chronicles. And he planned to use all of this material to compose a massive history of the Roman Empire, one that would begin in the ancient world and continue through the history of the medieval Holy Roman Empire of the German Nation, down to his own time. The project never reached completion, though enough remains to make clear both his ambition and his learning.

Between 1838 and 1850, one of the books Peutinger used to prepare his history entered the collection of the New York Society Library. It is a massive two-volume history of the world by Johannes Nauclerus (Vergenhans), the rector of Tübingen University, which appeared in 1516, a few years after its author's death. The book was still in Augsburg in 1743, when the scholar and librarian Andreas Felix von Oefele took notes on it. When and how it traversed much of Europe and the Atlantic Ocean, we do not know. 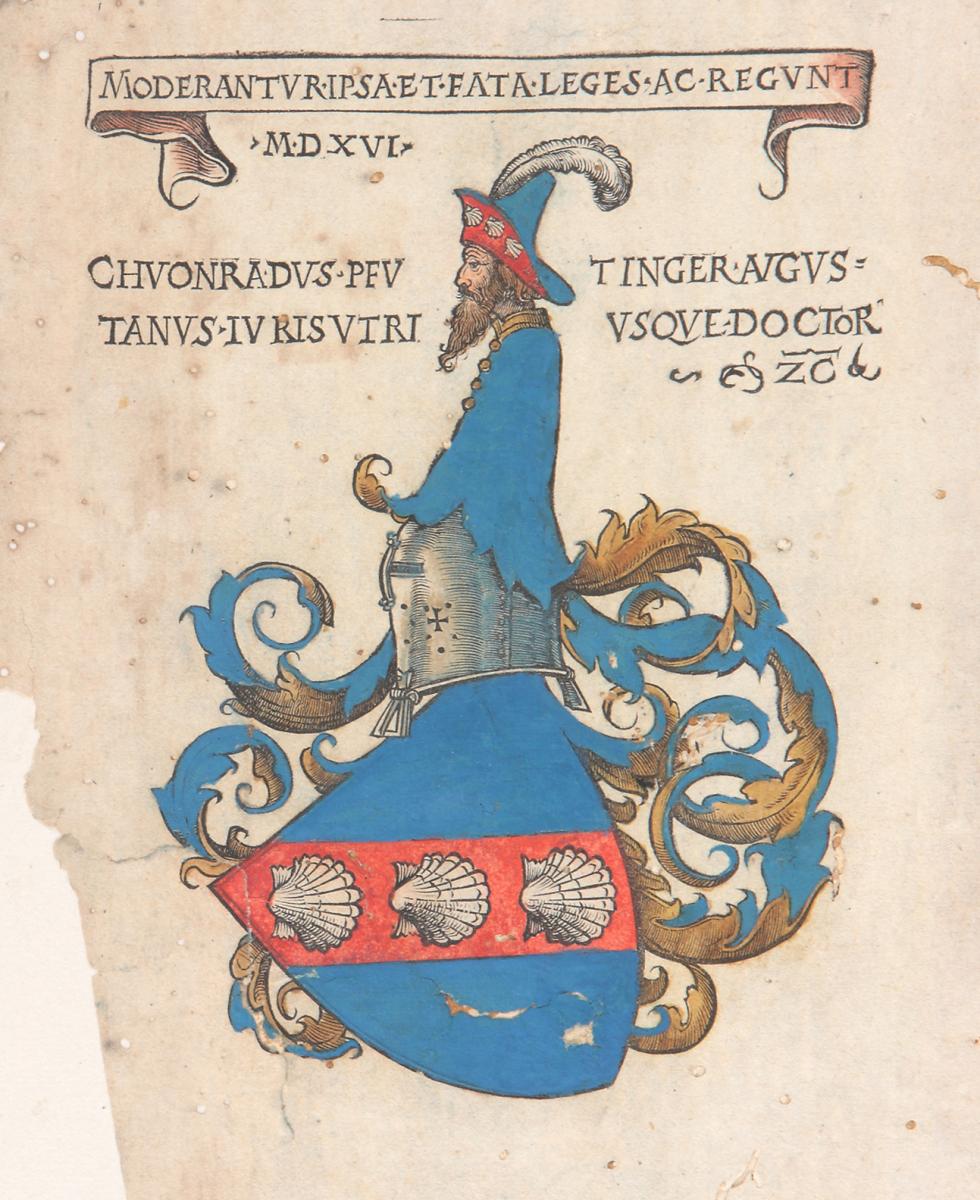 There is no doubt at all, however, about the book's original owner and reader. Peutinger glued copies of his splendid bookplate, designed in 1516 by the artist Hans Burgkmair, into the bindings of both volumes. And he read them — especially the second one — with intense interest. Like Hansel and Gretel scattering crumbs as they wandered through the dark forest, Peutinger left indications of special interest in the margins of the passages that he had found most useful in these immense books, in the hope that he could find them again. Short summaries in Latin, which he wrote as fluently as German; manicules, little drawings of pointing hands; and the word NOTA in large capitals called attention to such points as Pope Gregory VII's insistence on clerical celibacy. Like many Germans, Peutinger did not much like this eleventh-century pontiff, who insisted on the power and independence of the Church and humiliated the Holy Roman Emperor Henry IV. One of his notes described Gregory as "the creator of many evils."

A cricital reader, Peutinger tested parts of Nauclerus's account against many other sources. He corrected errors, and what he thought were errors (sometimes Nauclerus was actually right). A passage in Cicero led Peutinger to argue that Nauclerus had dated the entry of Germanic tribes into the Roman Empire too late. And his pride in the ancestry of the family that ruled the Holy Roman Empire, the Hapsburgs, forced him to refute Nauclerus's report that they were descended from an Italian clan: "I will never believe that the Hapsburgs trace their origin to those wretched Romans, the Pierleoni." 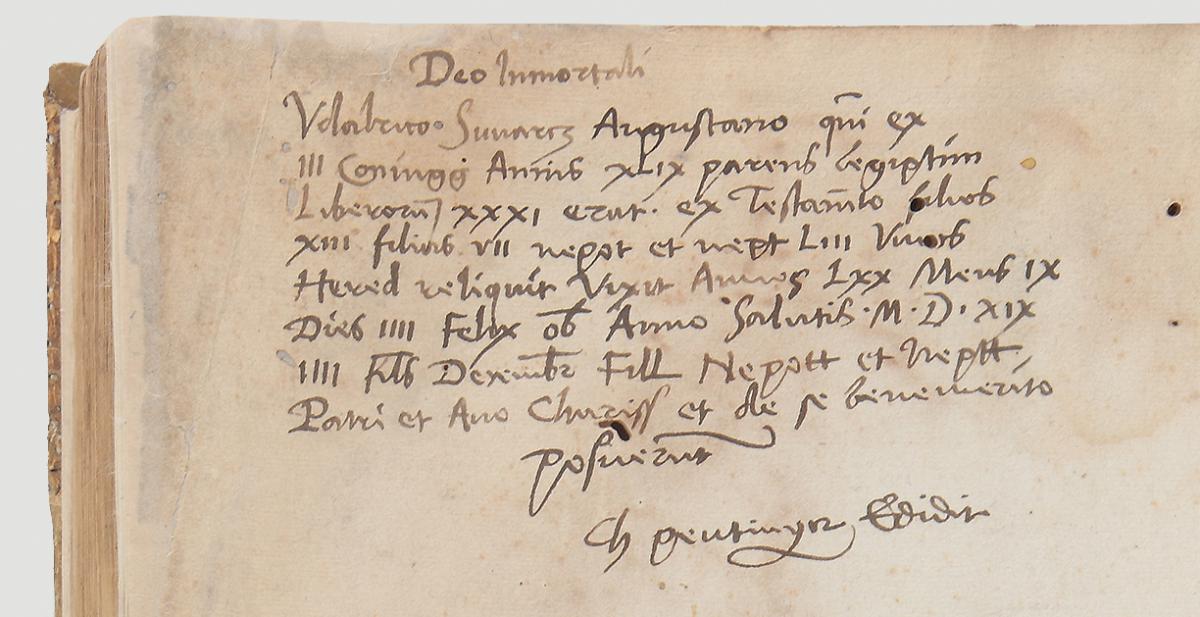 Like many of his contemporaries, Peutinger never had enough notebooks at his disposal to accommodate all the notes he wanted to take and all the passages from old texts that he wanted to record. Books became secondary notebooks. Peutinger used the end papers of his Nauclerus to transcribe the epitaph of Ulrich Schwartz, who died in 1519, and to claim the authorship of it: "Chonrad Peutinger put this out." At times, remarks in the text provoked him to talk back. Nauclerus mentioned the Black Legion of mercenaries employed by Matthias Corvinus, and noted that these once exemplary professional soldiers had degenerated into greedy freebooters. Three hundred of them had been executed in Vienna in 1492. Peutinger's remark in the margin was brutally simple, and it reminds us of what a violent world he lived in: "I saw them hanging."

The points that really caught Peutinger's eye had to do with the history of the Church. The Protestant Reformation was breaking out around him as he read this big history, and he looked for instruction in Nauclerus's account of the Middle Ages. In some ways, Peutinger thought, activist popes like Gregory VII had done a better job of dealing with abuses than the popes of his own time. Reading about Gregory's sharp, effective way of dealing with the crime of simony — using bribery to obtain an office in the church — he reflected grumpily: "In our time nobody worries about simony."

Yet there had been no golden age in the past. As Peutinger read Nauclerus's accounts of medieval theological debates, he saw analogies to the supposedly new Protestant ideas of his own time. Nauclerus described at length the story of the eleventh-century theologian Berengar, "who thought that the true body and pure blood were not in the sacrament of the Eucharist and the cup, except as a symbol, figure, and mystery." "This mistake," wrote Peutinger, "was revived in our time by Ulrich Zwingli and Johannes Oecolampdius." Medieval heresies mattered because they helped him recognize the heresies of his own time.

Like other medieval and Renaissance chroniclers, Nauclerus based his work in part on original documents: charters from the archives of monasteries, for example, which recorded gifts of property. One of these, which he quoted in part, recorded Charlemagne's land grants to the Benedictine house of Reichenau, perched on an island in Lake Constance. Peutinger had himself collected copies of many monastic documents, including this one. In the margins of his Nauclerus, he copied out parts of the charter that Nauclerus had omitted, including Charlemagne's official monogram, of which he gave a facsimile. 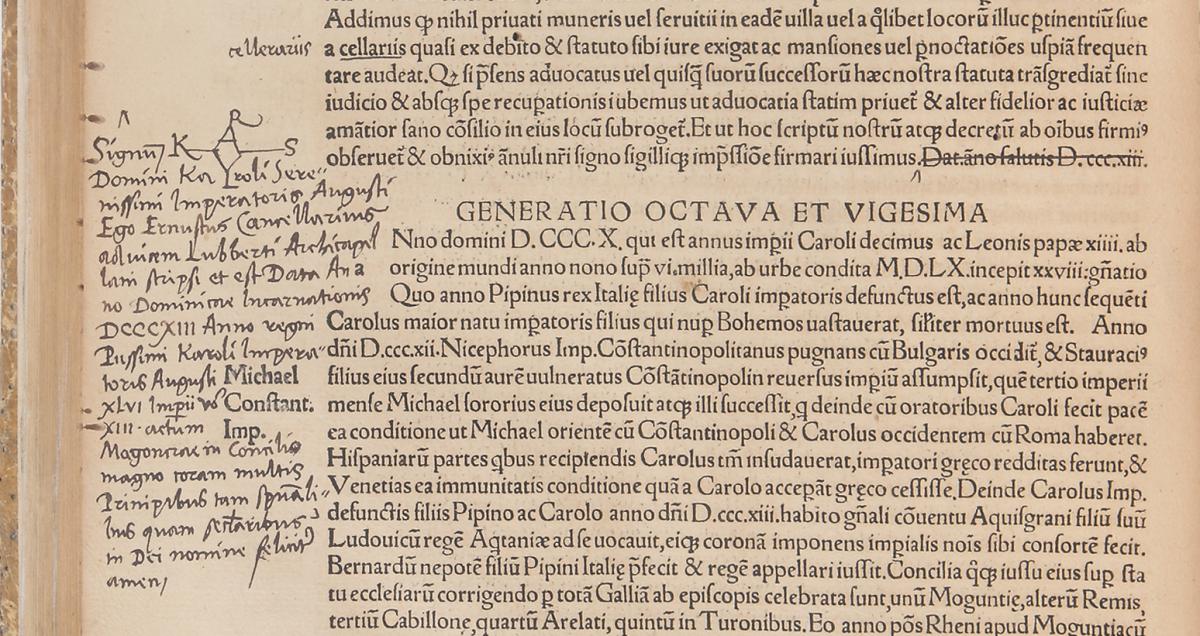 The document in question was forged, as many monastic charters are. But the way in which Nauclerus and Peutinger used it is very striking. Many scholars believe that the first historians to work extensively with primary sources were the Germans of the nineteenth century, Leopold von Ranke and his students. This magnificent book and its marginalia show us that Renaissance students of church history were already collecting documents and thinking about how to use them in historical narratives and arguments, three hundred years and more before Ranke. Long ago, one of the great historians of historical writing, Arnaldo Momigliano, pointed out that church historians differed from secular ones partly because they cited and discussed documents at length. This book offers new confirmation for his view.

Nauclerus argued that the pious Germans had played a special role in history: that they had destroyed the tyranny of the Lombards in Italy and spread light everywhere they went. He hoped they would do the same in the future as well. Peutinger, himself alight with excitement as he read these words, scribbled enthusiastic slogans by these passages "Understand and know"; "May that German shed light forth in our time." History might provide the keys to the future as well as the past. No wonder that Peutinger thought so hard about this beautiful book, or that he took care to transform it into a record of his thoughts and a tool for his research.

Anthony Grafton is the Henry Putnam University Professor of History at Princeton University. His most recent book is The Culture of Correction in Renaissance Europe,  published by the British Library.