Home > Library Blog > Libraries and Taverns: A Library Trustee, a Vigilante, and George Washington Walk Into a Bar... 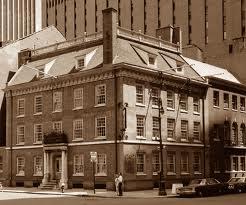 Libraries and Taverns: A Library Trustee, a Vigilante, and George Washington Walk Into a Bar...

Taverns in the 18th century were places for entertainment and indulgence as well as business. Much of the New York Society Library’s early business was conducted within the confines of this city’s taverns.  Our avid blog readers may have noticed that Fraunces Tavern specifically was mentioned in a number of our previous posts.  This notable tavern extended its hospitality not only to our trustees, but also to some of the most noted revolutionaries of the time.

From its inception, the Tavern was patronized by New York’s “best people.”  Opened by Samuel Fraunces in 1763, the Tavern was originally the great house of Etienne DeLancey, a French Huguenot. For many years the DeLancey House hosted concerts and balls, fabulous affairs for the most illustrious New Yorkers.  The entertainment of the city’s most eminent continued under Fraunces’ watch.

We know that the Library’s trustees held meetings in Fraunces Tavern, but who else drank the Tavern’s famous Madeira wine?  The Sons of Liberty for one.  The Sons of Liberty was a secret society formed to protest the abuse wrought by the British crown.  They were behind the Boston Tea Party and other infamous vigilante activity.  There is a record of a meeting held at the Tavern in 1774 for the Vigilance Committee.  On the agenda was the coordination of an attack on an English ship, the London, whose holds carried tea chests commissioned by the East India Company.  What was the end result of this fateful meeting at the Tavern?  New York’s very own tea party.

The Tavern’s hospitality to the revolutionary forces was warmly rewarded after the war, with Fraunces’ patriotic efforts deemed worth a $2000 award.  He was then appointed steward of President Washington’s household in New York City.  He went on to follow the President to the nation’s next capital city, Philadelphia.

A cursory glance at our Board minutes from the 18th century reveal that many meetings were held in New York City’s taverns.  This post is a short history of their compatriots at just one. By looking into Fraunces Tavern, we now know for certain that our original trustees associated with revolutionaries and vigilantes.  They were closely tied, through their patronage of the Tavern, to President Washington’s inner circle and to other influential members of society.  As we continue to discover more about the lives of our trustees, we are able to better understand the motivations and intentions of those who molded the Library’s purpose.