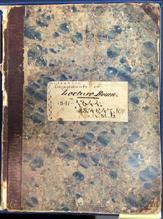 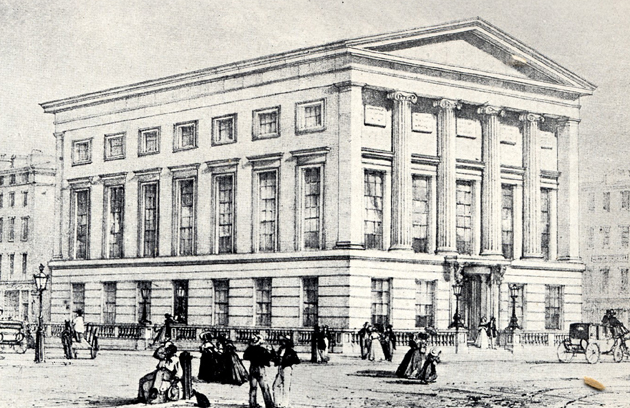 In 1840, the Library moved to a grand purpose-built home on Broadway at Leonard Street in the neighborhood now called Tribeca. The move was partly motivated by a partnership with the nascent New York Athenaeum. The Athenaeum was founded as the Library's rival, offering social-club aspects, a scientific laboratory, and a lecture series, in addition to a book collection. However, it soon ran into financial difficulty, and in 1839 the two institutions consolidated, leaving the Library with the building designed for both its collections and patrons and the Athenaeum's multifarious activities. As our history The New York Society Library: 250 Years puts it, "the Library found itself, unwillingly, in the entertainment business," albeit with the benefit of "an expanded membership in a burgeoning city alive with intellectual and social ferment." Between 1840 and the start of the next move in 1853, the Library would rent the Athenaeum's spacious lecture hall to many partakers of that intellectual and social ferment. The surviving ledger of those rentals includes names both unknown and iconic. Here are a few of the people who leap from the page. 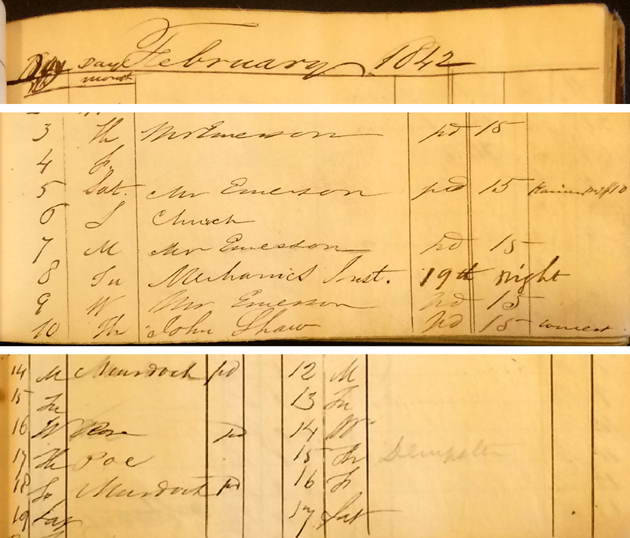 Ralph Waldo Emerson carried the gospel of Transcendentalism to educational institutions across the country, and he took over our space for two short runs in March 1842 and February 1843. His 1842 text was the beloved essay 'The Poet,' according to Walt Whitman biographer Jerome Loving: "Whitman...heard Emerson deliver an early version of 'The Poet' in the Society Library in Manhattan during the first week of March. Here he was first introduced to the transcendentalist idea that the 'meaner the type by which a spiritual law is expressed, the more pungent it is, and the more lasting in the memories of men.'...there is little doubt that the Eagle editorship was his first important step to becoming a citizen of the world that Emerson had beckoned him to enter." (Whitman served as editor of the Brooklyn Eagle newspaper from 1846 to 1848.) 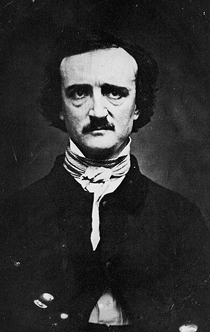 Edgar Allan Poe lectured in the Library building in January and April 1845 on an obvious topic: 'Poets and Poetry of America.' He then returned on February 3, 1848 on an odder subject: 'The Cosmogony of the Universe.' The content of this lecture probably overlapped with his lengthy prose-poem 'Eureka,' published roughly six months later. He may have been feeling close to the cosmos: he'd attempt suicide in November and die late the following year. Poe's 1845 audience enjoyed a more predictable evening, but his 1848 audience probably heard him anticipate such 20th-century discoveries as the Big Bang. Major doings for our accidental venue.

Actress and abolitionist Fanny Kemble booked the room for three dates in February 1850, although the librarian's note says she found the acoustics not up to theatrical standard. She might have applauded the Anti-Slavery Society, whose board member Sydney Howard Gay reserved the space later that spring for events with William Lloyd Garrison and the Hutchinson Family Singers. The Hutchinsons, a popular ensemble performing folk and protest songs, had rented the space in their own right several years earlier. 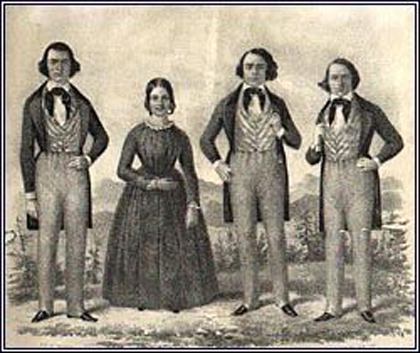 In Douglass and Melville: Anchored Together in Neighborly Style, Robert K. Wallach describes the resulting uproar. "A crowd of nativist New Yorkers led by 'Captain' Isaiah Rynders...shut down two successive meetings in the lecture hall of the New York Society Library...'by a wild chaotic tumult and other rowdy demonstrations'...Garrison, Phillips, and others 'essayed to speak, but in vain. The mob triumphed again, and that, too, in the presence of the police.'" "Thus closed Anti-Slavery free discussion in New York for 1850," sighed the New York Tribune. Hope was not lost, however: Frederick Douglass overcame Rynders' mob with his eloquence at the Broadway Tabernacle's similar gathering. It is possible, though inconclusive, that both Douglass and Herman Melville attended the aborted Library events.

Gleaning the secrets of the lecture hall rental ledger has only begun. We look forward to discovering many more of the historic intersections that took place at the Library.