Home > Home > Marginalia and the Social Nature of Reading 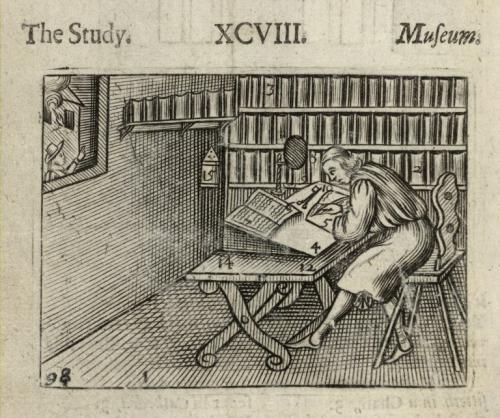 The reader in his study. Who is he writing for?

Marginalia and the Social Nature of Reading

Marginalia offers us a privileged window into one of the most seemingly intimate of human activities — that moment of communion, whether casual or profound, between readers and their texts. In recent decades scholars have been ever more keen to combine it with other sorts of more "public" evidence — correspondence, publications and the like — to round out our understanding of that mysterious transformation of reading into writing. Can marginalia help us understand how the consumption of existing texts led to the production of new ones?  To us, reading might feel like a private activity, even if we often perform the task in highly social spaces —whether in the classroom, in online discussion forums or (as the Society Library members know well) in physical libraries. To the historian of reading, one of the most tantalizing and difficult questions concerns the shifting nature of the social act of reading.  After all, silent reading is itself a practice with a history, and one more recent than we sometimes suppose: in his Confessions, Augustine marveled that Ambrose performed his reading in silence, rather than uttering aloud the words he saw on the page. Medieval scholars in turn have explored the correlation between the adaptation of silent reading and the emergence of spacing between individual words in manuscripts. All of this begs the question: just how private was reading (and annotating) in worlds before our own?  And is such a distinction between the private and the intimate on one hand, and the social and the communal on the other, one that even makes sense when excavating readings past?  Finally, when we encounter marginalia, how ought we to distinguish between notes meant for the note-taker alone, and others designed to be shared, showcased, or otherwise disseminated?

We find both direct and indirect evidence of the social nature of reading in the books of Adam Winthrop, the patriarch of the Winthrop family and the annotator of several of the items featured in Readers Make Their Mark, the Library's ongoing exhibition.  Thankfully, Adam did not just mark up his books, but he also kept a diary, in which he kept meticulous track of his library and his reading. Here he took frequent note of the books he loaned to both friends and relatives (a practice almost as frequent as the many sums of money he recorded having loaned).  To cite but just a few examples out of many, we find him lending out both an English translation of the ancient church historians Eusebius and Socrates, and the Basel edition of Petrarch's Opera Omnia. He mentioned having given several books to one of his cousins, Humphrey Munning.  In 1597 he recorded that he lent William Lambarde's Perambulation of Kent (one of the earliest of English local histories) to Thomas Nicholason, the rector of Groton. Intriguingly, Adam's copy of this pioneering work of English antiquarianism — now at the Massachusetts Historical Society —is one of the most copiously annotated of all of Adam's books, filled with lists and indexes that Adam compiled.

When Adam lent books like these from his large library, did he intend to share his annotations as well?  Such questions hardly admit easy answers, and await a more thorough investigation of just how early modern readers consumed learned marginalia. But Adam's practices of annotating books — transmitted, as discussed in Readers Make Their Mark and elsewhere —to his grandson John Winthrop Jr. and beyond, were far from an intimate, private affair. Rather, in ways that may seem alien to us, they served in some fashion as objects to be disseminated, just as much as the books in which Adam lodged them.

Just why should the social dimension of marginalia matter today? As books multiply in both print and digital form, the physical library — any library, in fact — may seem superfluous.  After all, books beckon to us online, and we can easily fit hundreds, if not thousands of them on our personal computers or e-readers. Aren't libraries then all just copies of one another? Of course, anyone who has used a library knows this couldn't be further from the truth. Books alone do not make a library; rather, as any patron of the Society Library knows, there is something about books and patrons, readers and writers, gathered together in the confines of a single space.  Adam Winthrop did not refer directly to his book collection as a library, but the fragments of evidence we possess suggest that it too may have functioned, albeit more informally, in such a fashion. Whether in East Anglia around 1600 or today, it is this irreducible social dimension that has always made libraries greater than the sum of their parts. Annotation is one more thing that confirms that no two libraries will ever be alike. Go on Google Books, or do a WorldCat search for any of the items featured in Readers Make Their Mark, and you will easily find numerous copies, maybe even hundreds, in libraries all over the world.  Perhaps you will be able to download a copy as a PDF, or consult them at any number of other libraries, whether in New York or beyond. But at the end of the day it is the readers' marks that make a given copy unlike any other. You can multiply an author's words in seemingly endless fashion, but a reader's words (or even their mere marks) remain always linked to the single, personal book in which they read them. Just how personal these marks were remains an open question, but we would do well to dwell upon their indisputable importance to the links and bonds that generations of readers established with one another.