Home > Home > Mark Up Your Books (But Please Don't Mark Ours)

Mark Up Your Books (But Please Don't Mark Ours)

This Wednesday, February 4, the Library celebrates the opening of its next exhibition, Readers Make Their Mark: Annotated Books at the New York Society Library in the Peluso Family Exhibition Gallery. 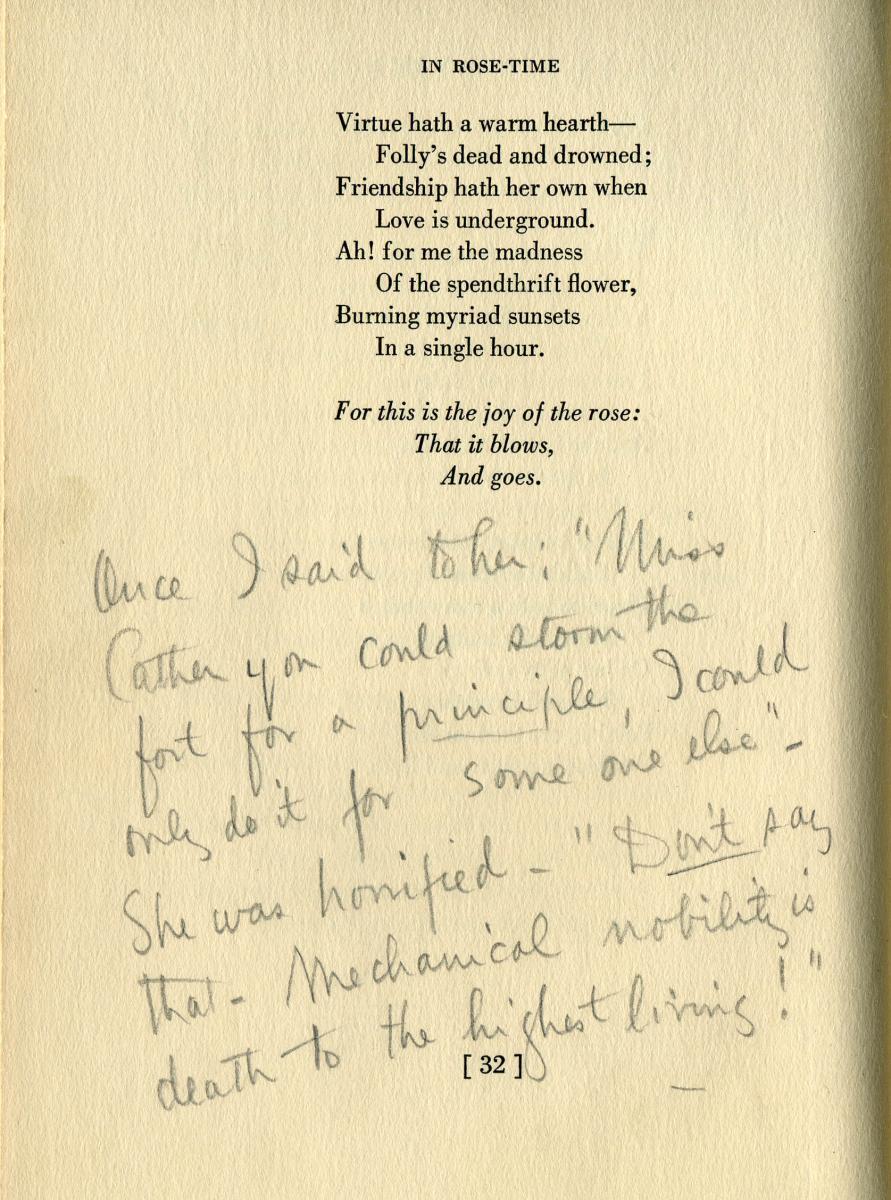 Why would we celebrate – as opposed to discourage, condemn, or even punish – the practice of writing in books, which is strictly forbidden at the Library?  Most Library members have probably experienced moments of frustration (perhaps even despair) after finding a previous reader's check marks or commentary in the books they've schlepped home or browsed in the stacks.  Virginia Woolf felt the same way, and wrote about it.  In Hermione Lee's biography of Woolf, Lee describes a satricial manuscript found today in the Monks House Papers at the University of Sussex, England.  In this short piece Woolf mocks people who write in their books, caricaturing a few especially irksome annotators and the kinds of marks they make.

First, a peppery old Colonel, denouncing any 'pernicious heresy' he finds in books to his wife..., or taking out his temper on his 'violated margin.'  Then a clergyman who 'feels it incumbent on him as a Christian' to disseminate his little facts.  Then an emotional lady who draws 'thick lacrimose lines' in books of poetry 'beside all the stanzas which deal with early deaths, &  hopes of immortality,' and sends books back to the library with a 'whole botanical collection' pressed between the leaves.

All of Woolf's imagined reader-writers(-botanists) write in their books as part of a community of readers, and believe that others should read their commentary on the text.  Her annotators assume that their additions are not only worth sharing, but that subsequent readers are incapable of analyzing or responding to the text without help.  Transport the peppery old Colonel to the cinema, and he comments on the moral failures of the screenwriters, shows off his knowledge of the filming locations, expresses his disgust for the actors' or actress' love-lives.  Just as a theater would discourage such behavior among movie-goers, at the Library we ask that you enjoy reading with respect for your fellow readers, that is, without writing your thoughts in the Library's books.  Even if lightly penciled check marks, an underline or two, or a reference to an obscure but important text in a Library book do not disturb your reading experience, a subsequent reader (and perhaps even the book itself) will find them exasperating.  Virginia Woolf certainly would have.

Woolf did, however, take notes as she read, just not in the books themselves.  She kept reading notebooks, leaving behind inky trails that serve as guides to her literary explorations.  Lee discusses Woolf's reading practices in detail, devoting an entire chapter to the subject.  Here is one excerpt:

Instead of annotating, she rules margins in her notebook, puts the number of the page she's referring to in the margin, and writes next to it a quotation or a comment.  When she comes to write her review, she will ring the quotations she wants to use, usually in blue pencil.  If she's been reading without her notebook to hand, and making notes on scraps of paper, she will stick these scraps into the notebook.  Out of this 'reading with a purpose' or 'reading with pen & notebook,' she accumulates the many volumes of notebooks, which tell the story of how her mind works when she is reading.

"The story of how her mind works when she is reading," indeed.  Since the early 1990s, scholars like Anthony Grafton, Lisa Jardine, William Sherman, H.J. Jackson, Andrew Stauffer, and many others have studied annotated books to better understand the minds of readers from the early modern period to the present day.  These scholars strive to know how people read, how they thought, and how their reading informed their ideas and actions in professional and private contexts, and they turn to marginalia in building their arguments.  But the readers they study, whose books now form parts of major library collections across the globe, were marking up their own books.  Similarly, the books on exhibit in Readers Make Their Mark were marked-up by their former owners.  With one exception (Giovanni's Room), all of the books on display came to the Library as gifts and were not annotated by Library members, but by people who transformed their own books into detailed records of their reading experiences. 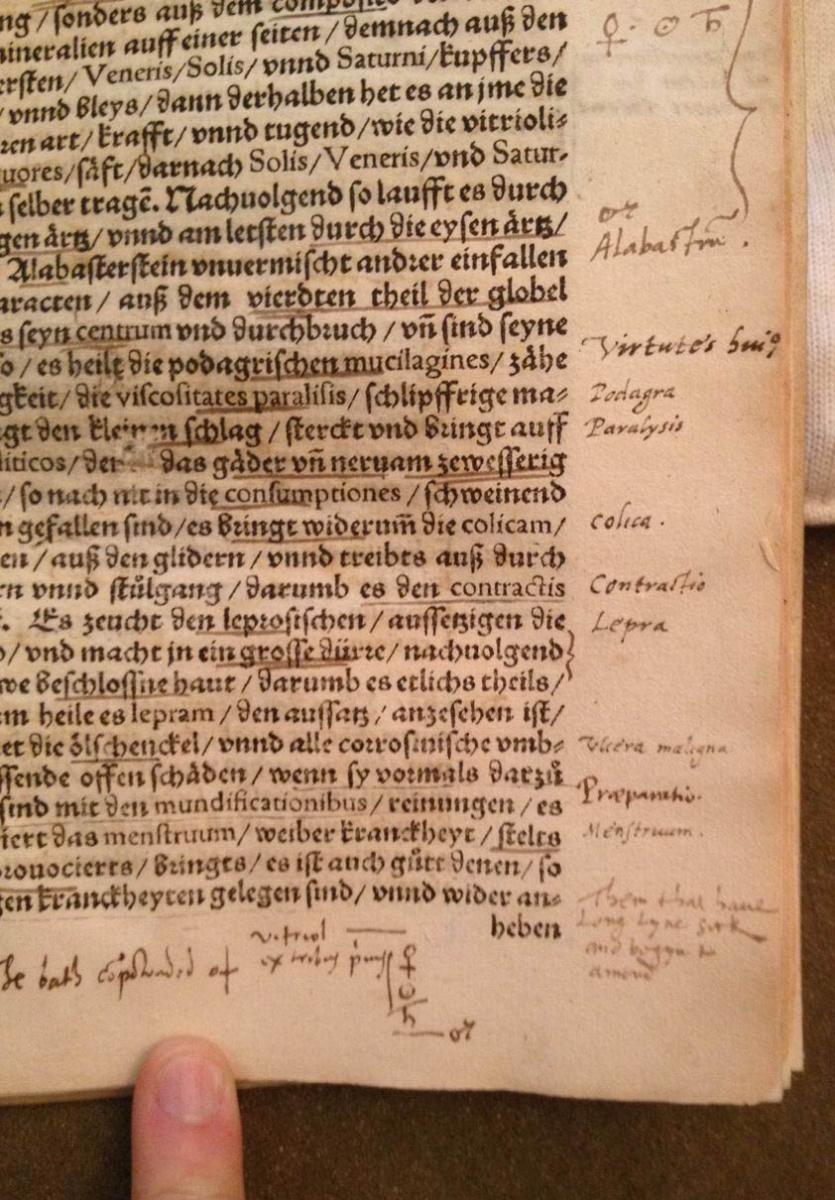 Much like Woolf's notebooks, the books on display reveal the private relationship between a reader and his or her books.  This is especially exciting when the reader-writer is well known, like Virginia Woolf. Her notes matter because we care about what she wrote, and it's exciting to understand how her writing developed in connection with her life as a reader.  (And even, as Lee describes, her domestic life: "A good many books have marks of animals' paws on them.")  We celebrate well-known annotators like John Dee (1527-1608) and George Bernard Shaw (1856-1950) in Readers Make Their Mark, but I think that some of the most interesting annotations come from lesser-known readers.  A totally unknown person marked up the Library's extremely rare copy of the first American edition of Jane Austen's Emma (she didn't much like the book), providing an even rarer first-hand account of a contemporary reader's experience of an important work of popular fiction.  Mai-mai Sze (1909-1992)  is another obscure annotator, and her hand appears in every case of the exhibition.  Sze is a deeply interesting and mysterious figure who lived her life on the margins of American, English, and Chinese culture.  The daughter of a diplomat, she was born in China, raised in England and America, and lived at various times in London, Washington DC, Paris, New York, and Los Angeles.  Shortly after Sze's death the Library acquired the vast collection of books that she and her partner, Irene Sharaff, built together.  The books she published reveal something of her interests (she is best known for writing the standard English translation of an important Chinese manual on painting), but her intense interests in art, philosophy, and literature come to life in her books.  Sze's annotations show us who she truly was, a profoundly intelligent and inexhaustably curious woman with a rigorous mind and a lifelong devotion to study.  Without the notes she left in her books - and these notes were truly hers, she was not writing for somebody else - the story of this fascinating woman would be lost.  Likewise, John Winthrop Jr., Mary Cadwalader Jones, John Romeyn Brodhead, and Mary King van Rensselaer are all relatively minor players in the histories they appear in, but the marks they made on their books vividly show us just how engaged they were with the world around them.

With Readers Make Their Mark, the Library celebrates the long tradition of readers and their writing in their books.  We still ask that you refrain from writing in ours - follow Woolf's example and keep a notebook instead.  Next time you visit the Library, we hope that you stop in the Peluso Family Exhibition Gallery to see what readers-past have had to say about what they read.  We hope it inspires your reading and writing.