Home > Library Blog > Melville's Not the Only One 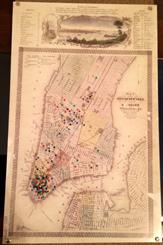 Melville's Not the Only One

The Library's current exhibition, Herman Melville's New York, 1850, explores the relationship between the member writer, the city of New York, and the Library itself. In 1850, Melville lived about a mile north of the Library, and he often visited his brother at his Wall Street office or promenaded on the Battery just a half-mile downtown. This pattern was typical of many of the men at the Library who read his books, for whom the Library would have been a convenient stop on their commute. Like Melville himself, they could have perused the newspapers in the reading room, or books on the shelves, which often traveled home with them to their families. Perhaps they sat and talked in one of the Library's conversation rooms. 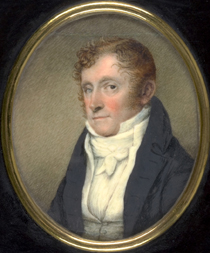 The Library was and remains a unique place for readers and writers. Writers encounter each other today in writing groups (we haven't found evidence of this in the past, yet), they encounter their readers in the reading rooms, and at the circulation desk, and they encounter the books that inspire and inform their own work in the stacks. The Library has existed as a place where writers encounter the literary world since the eighteenth century, and there are seemingly endless possibilities for explorations of New York literary lives through the lens of our collections. William Dunlap is an early example of a literary and nonfiction writer whose social life, literary output, and relationship to literature are well documented in primary and secondary literature. The Library's records of his reading – now available digitally in City Readers – can, like Melville's New York, 1850, help us better see the author in a meaningful context.

Beyond Herman Melville, nineteenth-century literary figures like Washington Irving (a trustee), John Romeyn Brodhead (an early historian of New York), Clement Clark Moore, and William Cullen Bryant were all members of the Society Library. In the twentieth century the lists expand even more: W.H. Auden, Djuna Barnes, Willa Cather, Clarence Day Jr., Hamilton Fish Armstrong (a Chair of the Board), Lillian Hellman, and many others read and wrote at the Library. These writers' New York literary lives come to life in new ways when explored through the Library's history and collections. And, of course, we're just as proud of our ongoing services and programming by and for member writers today.

If you haven't yet seen Melville's New York, we urge you to come in and get to know one of America's most iconic writers in a new way. The show closes on November 7, so hurry!

This blog post is third in a series about Herman Melville and the Library. Read the full set here: