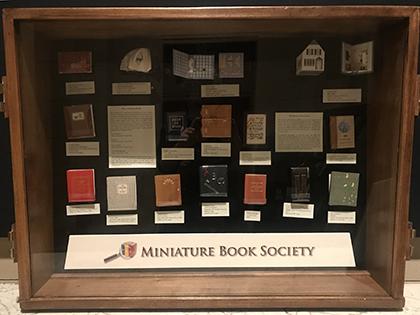 Miniature Books Take Over the Library

If you visit the Library this fall, you may notice some curious little interlopers. We’ve teamed up with the Miniature Book Society (MBS) to bring you a traveling exhibit of intrepid little books.  You’ll find two cases in the first floor reference room, and one across from the elevator on the second floor.

MBS created this exhibit in 1987 in order to promote knowledge of miniature books.  Each year new books are added, including modern masterpieces, historic examples, and winning entries from the Miniature Book Society’s Annual Competition.

What exactly is a miniature book?

Generally, a miniature book is under three inches in every dimension. In Europe, it can supposedly go up to four. I believe some collectors would even go up to a whopping 5, but for the purpose of this post, we will leave it at three inches.

Though there are, for the truly obsessed, even more gradations into which to lose yourself. There are actually four categories that you will want to familiarize yourself with, if you want to avoid running afoul of a miniature book collector.

It is a little difficult to speak about the history of miniature books as a stand-alone category, because they generally follow the history of all books - just in a smaller scale.

So, when the Babylonians were making clay tablets, they were also making miniature clay tablets. Usually they served the very utilitarian purpose of keeping track of trade. You’ll also find miniatures being produced in the earliest days of printing.  Incunabula are European books printed before 1501, following the invention of the printing press by Johannes Gutenberg. There are 26,550 known incunabula still in existence; about a dozen of these are miniature.

In fact, since the invention of the printing press, printing apprentices were traditionally taught to work in miniature, to hone their skills. The thought was, if you were attentive enough to handle miniscule type accurately, you would have no problem with more traditional sizes.

Fly’s eye type is a two-point type, developed in Italy in the mid-19th century. The first use of this was in an 1878 edition of Dante’s Divina Commedia. Evidently cutting the type caused serious injury to the ‘eyesight of both the compositor and corrector. It took one month to print thirty pages....” (A Short List of Microscopic Books in the Library of the Grolier Club, Mostly ...By Grolier Club. Library, Samuel Putnam Avery, 1911). To give you a sense of the scale, four letters would fit on the head of a pin.

Since then, type and books have continued to grow ever smaller. The Guinness Book of World Records lists Teeny Ted from Turnip Town, published in 2007 by Robert Chaplin, as the world's smallest reproduction of a printed book. At 0.07 mm x 0.10 mm, it would almost certainly cause serious injury to eyesight of any causal reader.

Almost since there have been books made specifically for children, people have been making them in miniature.

Probably some of the most famous miniature children’s books were handmade by the Bronte children in the early 19th century. Made by Charlotte Bronte and her brother Branwell, only about 20 survive, which they pieced together from scraps. They’re each around 2.5 x 5 cm large. Harvard has 9 of them, which they have fully digitized and made available online here.

Thumb bibles started to appear early in the 17th century as a way of introducing religion to children in easily digestible, bite-sized pieces. They were paraphrases of bible stories edited for children, and generally illustrated.

In the early 19th century, entire miniature libraries for children started to be produced. They were often in the form of a miniaturized bookcase shaped-box, filled with identically bound little books. Subjects often included royalty, history, natural history, and religion.

Queen Mary’s Dollhouse holds a collection of 200 miniature books by famous authors of the time. They were all handbound in different leather with individual tiny bookplates. 171 authors, 25 composers and 700 artists who were asked to contribute to the library, and were sent a tiny blank book to fill out. (Most of them accepted.)

The Emancipation Proclamation was first published as a miniature book in 1862, measuring in at 2¼ x 3¼ inches. One million copies were distributed to Union Soldiers so they could carry them with them and distribute them, but only a few are still in existence.

Anne Boleyn purportedly carried a miniature book with her to her execution.  This 4 cm x 3 cm book of psalms, containing a portrait of Henry VIII, was handed to one of her maids of honor when she was on the scaffold, moments before her execution, in 1536.

A miniature book has even ventured as far away as the moon. Buzz Aldrin carried a tiny book with him on Apollo 11 on his historic voyage. Titled Robert Hutchings Goddard: Father of the Space Age, and the size of a credit card, the book is now housed at Clark University.

If you’re interested in learning more about miniature books and where to buy them, having a collection appraised - or if you just like getting adorable stuff in the mail, The Miniature Book Society is a good place to start. Or you can check out our copy of Miniature Books: 4,000 Years of Tiny Treasures. You'll find it in Stack 11.

The exhibit cases will only be up until November 23rd, so stop by and take a look soon!