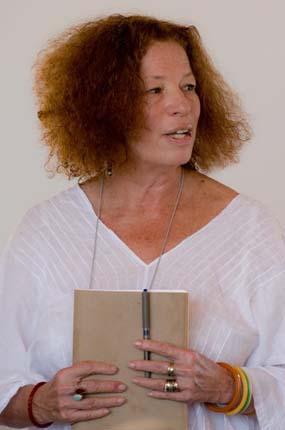 For National Poetry Month, we asked Library member and poet Esther Cohen to talk about the importance of poems.

About Poems by Esther Cohen

A few years ago some people at the National Academy of Poets made a decision that in April, there would be poems.  There was no clear reason for April, although of course there have been many essays speculating why.  Some scholars claimed that spring and poetry and T.S. Eliot were linked and April had to be the month for poems.

I’m here to tell you all, readers of poems and unreaders too, that poetry month could just as easily have been November, or August or even February.  A poem, just like every other form of art, a painting for instance, has a lot of arbitrariness to it.  Even for those very precise poets, who struggle over and over with every word.  They want to get it right, even though the it is evasive, and so in the end is a poem.

I’ve been teaching about poems for years.  Not because I could tell you, with accuracy, with certainty, and with the complete confidence that comes from knowing, exactly what a poem is.  Because a poem if it works holds a certain amount of mystery.  A mystery that people often try to dissect.

Occasionally I buy books of explanation, like Making Sense of Poetry: Patterns in Process by Patrick X. Dias.  Books that discuss why people respond, and how.  Books that quantify, and dissect.  Books with results and data, all of which are entirely unpoetic, and in the end certainly don’t explain too much about the poems themselves.

There are as many poems as there are poets. Here’s one I like a lot, by ee cummings:

may my heart always be open to little

birds who are the secrets of living

whatever they sing is better than to know

and if men should not hear them men are old

Not that we couldn’t  dissect what’s good about this verse.  Why it works.  We could.  But maybe what’s more important, most important even, is to put ourselves in the company of poems.  To read them.  Some people don’t like how poems look on a page.  Too much white space is what they say.  Some people feel there may be a secret to a poem. Maybe they won’t understand.

If I could change one poetry thing, it would be to tell you that poems are for you. What they sound like, what you see when you hear the poet’s words, and how they make you feel is what matters most. Many people in this wonderful library write poems.  I’d like to read them all.  Here’s one of mine. I wrote it for all of you.

My mother was my first reader.
She had some suggestions. I’ve never
been good at suggestions, even then.
I’d written a story about two friends
based entirely on my best friend
Mary Ellen Ashelford and me.
The third character, Mrs. Spakowsky
was exactly like our backyard neighbor
Mrs. Spakowsky. I didn’t know her first name
so I called her Mary.  In my story Mary Spakowsky
wore a light green dress.  Change her dress
my mother said.  Green is not a popular color.
I was annoyed.  Who cared about popular.
You’d better care said my mother. You’d just better.
In my story Mary Spakowsky’s dress stayed green.

Esther Cohen is always very happy at the New York Society Library. She teaches, writes, and posts a poem a day at esthercohen.com.  To send her your poems: bookdoctor@rcn.com.