During the yellow fever epidemic that took hold of New York in 1798, the dramatist, painter, and historian Wiliam Dunlap was living in Perth Amboy, New Jersey. On September 5th of that year he recevied a letter from his friend William Johnson: "You had better leave a dull and uninteresting country scene & join us," he wrote. "The Town is the only place for rational beings. Under the shield of Philosophy, what do we have to fear?" (Diary of William Dunlap, Volume I, 336) "Rational beings" could mean a lot of things, but between Johnson and Dunlap, one thing it certainly meant was "reader." Both men were members of the short-lived but celebrated literary society, the Friendly Club, and actively engaged in the nascent culture of learning and intellect in New York City. They were also members of the New York Society Library.

Dunlap's diaries make frequent mentions of the books he pored over and discussed with his many friends, but they form one of just a few known surviving examples of daily records of bookish life in eighteenth-century New York. So how can we learn more about what Dunlap's peers might have been reading? The New York Society Library's archives contain rich records of borrowing histories for our members from 1789 to 1909 (there are a few gaps, but not many), bringing a world of books and learning, both private and social, to light. It's no exaggeration to say that this is the longest and most detailed record of reading in New York City, if not the east coast, known to survive today.* And thanks to the Library's new digital collections portal, City Readers, it's now easier than ever to uncover the lives of remarkable early New Yorkers like Dunlap, who indeed heeded his friend's advice. Within a year of receiving that letter, Dunlap returned to New York and borrowed Volume 17  from the Library's set of Samuel Johnson's Works of the English Poets — Dryden's Virgil. 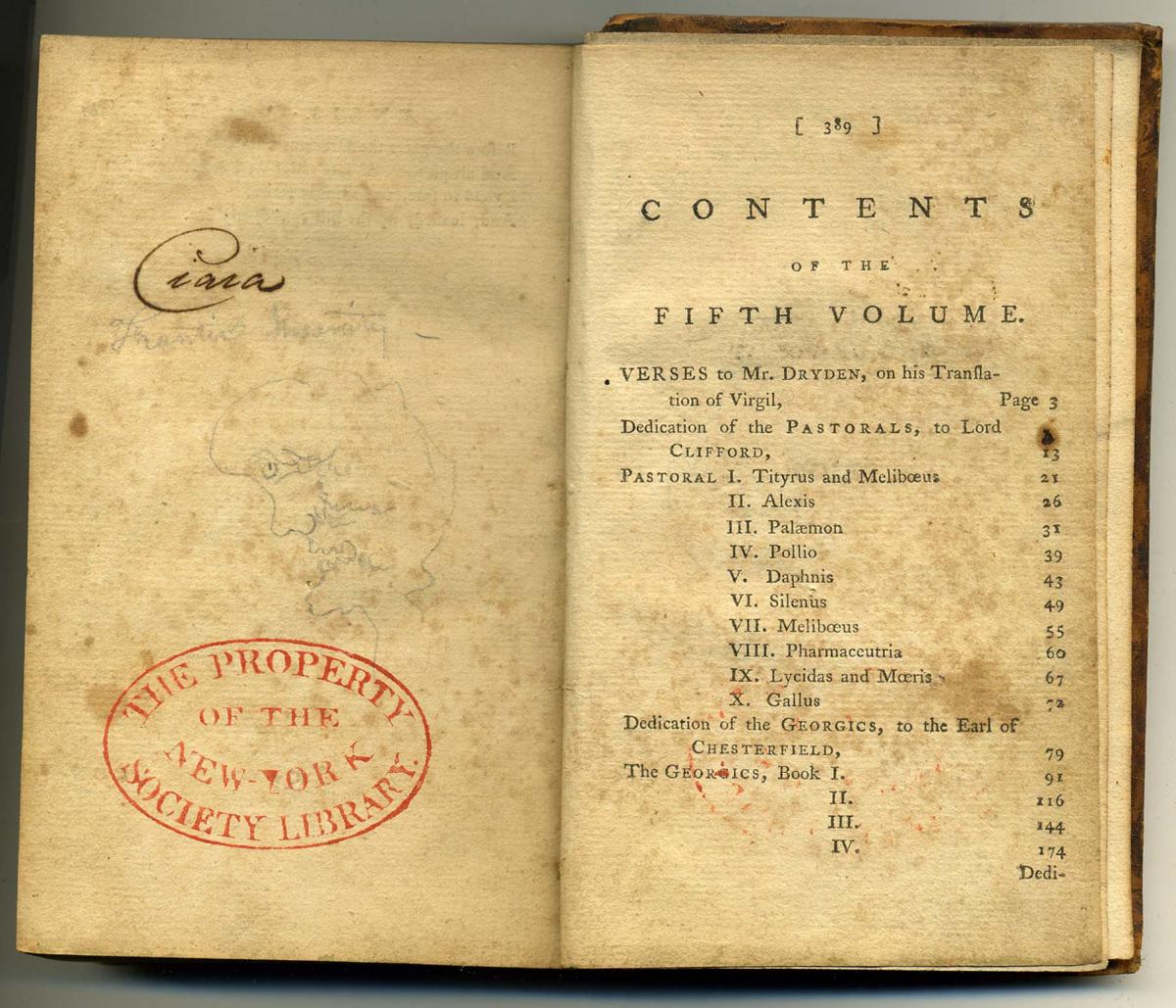 Right now, City Readers hosts digital copies of the Library's first and second charging ledgers and our early catalogs, and it will someday expand to include digital copies of a wide range of materials from our archives, from lecture committee and acquisition records to librarians' papers, even books and works of art in our collection. Just like our Early Circulation Records Project, City Readers provides transcriptions of the borrowing transactions in the first and second charging ledgers, which document circulation activity from 1789-1792 and 1799-1805, but it also improves upon it by offering a range of new features to help you explore the hundreds of thousands of records already in the database.

I'm excited about City Readers because I think it will help us to write a long-overdue history of reading in New York City. Our circulation records can answer some of the most basic questions about New York's readers: Who was reading? What did they borrow, and when? The Library's catalogs, all of which are now available online, can tell us what books were available to Library member-readers. And with City Readers' new advanced search tools, you can find reading histories of individual books and borrowers, or you can search for check-ins and check-outs over a defined time period. You can also explore groups of books by subjects, borrowers by occupation, or pull up lists of readers who checked out books on a particular subject as classifed in one of the Library's 19th century catalogs. Finally, visualization tools create custom views of our data in graphs and maps. Get a sense of a book's popularity at the Library or a reader's activity year by year by viewing annual check-outs on a graph against a library-wide average, or even against other books and readers. A mapping visualization shows the density of titles printed in Europe and North America by catalog, contextualizing the growth of the collection in time with respect to changes in the trans-continental book trade. Last but not least, City Readers will soon host a finding aid for the Library's archive, which we are now working to process and describe. It is our hope that by providing access to our collection both online and on-site, we can encourage both casual browsers and serious researchers to ask new questions and make new discoveries about the literary lives of New Yorkers well-known and obscure from the eigthteenth to the twenty-first century. 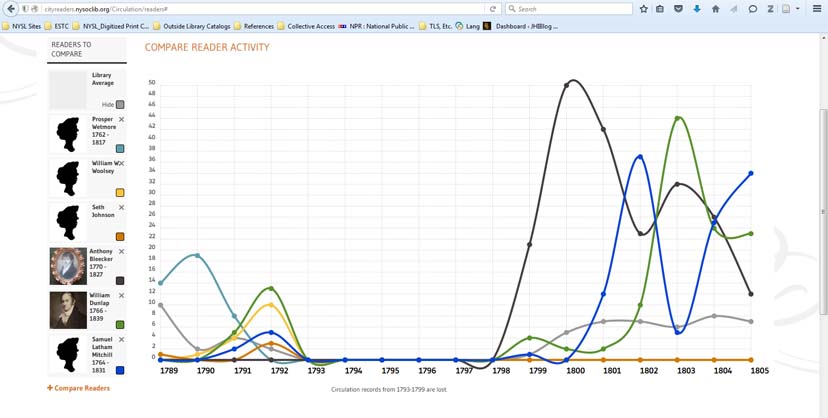 While City Readers now contains Library records from the turn of the nineteenth century, it still speaks volumes about the potential of the archive to inform a history of reading in New York. First and foremost, these records provide detailed evidence of the who, what, when, and where of reading at this institution. While that can't provide a comprehensive overview of reading history across a historically diverse New York, it does tell us a lot about a surprisingly diverse group of readers. Purchasing membership in the Library was (and remains) impractical for many New Yorkers, but it's important to note that members of the Library were a fairly diverse crowd of men and women. More than fifty women owened their own shares in the Library between 1789 and 1805 (they were some of our most voracious readers), and that number only grew in the nineteenth and twentieth centures. The men were a fairly mixed crowd too, professionally and otherwise. Printers, doctors, lawers, brewers, merchants, bankers, scholars, and artists all visted the Society Library to borrow books. Library members also came from a variety of political, religious, social, and even racial backgrounds. In the eighteenth and early nineteenth centuries, Federalists and Whigs, members of the Tammany Society and the Society of the Cincinnati, Presbyterians, Catholics, and Jews all crossed paths here. Later in the nineteenth century, our records show that Jeremiah G. Hamilton — Wall Street's first black millionaire — owned a share in the Library in the 1850s, and his circulation records show that he borrowed books up through 1865 at least. There's far more digging to do before we can say that the Library was fully integrated in the nineteenth century (although, we do know that the Library was a meeting place for the Anti-Slavery Society, and several early members were pioneering advocates of abolition in New York), but even if it wasn't, Hamilton's membership at the Library underlines something very important about this quintessentially New York institution. Membership at the New York Society Library was open to anyone with the money to purchase it. So while the Library's records certainly can't form the foundation of a comprehensive history of reading in New York, they still provide us with more information about New York readers in a well defined context than one could find in any other repository. And thanks to City Readers, it's easy to get at that information and arrange it in all kinds of different ways.

There are lots of histories of New York City, devoted to many aspects of its growth and development as a (if not the) cultural capital of North America, but we don't yet have a history of New York's readers, their books, and their habits. In a city with a historically neurotic attitude toward the cohabitation of commerce, culture, and entertainment on one tiny island, a history of reading can point toward a better understanding of how people consumed literary culture and how their reading came to bear on their lives.  Jonathan Rose's excellent The Intellectual Life of the British Working Classes shows that surprising histories emerge when we look closely at what ordinary people actually read. City Readers might also bring some striking histories to light, too. Who would have guessed that Welsh coal miners were reading Greek philosophy, or quoting Byron in the depths of the mines? (Rose, 241) Would you have thought that a New York brewer was checking out Voltaire in 1801? Or Livy's History of Rome? We've always thought that early readers of fiction were predominantly women, so what do we make of the many men borrowing novels from the Library? Or the women who borrowed books on math and science? By examining the material evidence of the uniquely urban-American collision of books and people in New York City, we can realign our understanding of how New Yorkers consume and relate to printed matter. Did people read for pleasure? For self-improvement? For knowledge? For wealth?

As Thomas Bender wrote in New York Intellect, "New York is a place where one finds life at its most highly accomplished levels of mind, art, and technique, and where life is confronted, daily, at its most elemental, as a matter of sheer survival." (Bender, 1) A New Yorker is as relentless in the pursuit of knowledge as she is in the pursuit of wealth, success, and entertainment; it's a matter of survival. The City's identity rests on the innovative ways in which its residents confront the highs and lows of life here, and New Yorkers have always found some complex — often chaotic — ways of doing this, not just on the market, in art galleries, or at Max's Kansas City, but also in bookstores and libraries (and on the subway, park benches, and at home). Historians have yet to bring this bookish side of the City to light, and it is our hope that City Readers will reveal a New York every bit as unruly and alive as the world knows it is.

*Circulation records for other early east coast libraries do survive, including those at the Boston Athenaeum, some of which they have digitized. Records also survive at the Redwood Athenaeum, the Charleston Library Society, the Library Company of Philadelphia (dates of coverage unknown), and other subscription libraries. Harvard has also digitized borrowing records from their College library, from 1762-1897. NYPL's Manuscripts and Archives Division also holds a rich collection of Library records, including circulation records from the Astor Library (1839-1911), a number of branch libraries, and even records for a Lisbon, Connecticut library from 1790-1815. Looking a bit farther west, the Easton Library Company's records (1811-1862) surivive and have also been transcribed and digitized in a databased maintained by Lafayette College. There's also Ball State University's excellent What Middletown Read database, pulling records from the Muncie Public Library, Indiana. (See also Frank Felsenstein's excellent book on reading in Muncie, also called What Middletown Read.) Do you know of more? Please add links to finding aids and databases in the comments section, below!