It is one of the great satisfactions of my life to serve as the Library's copyeditor for many publications. Our communications are very much a team effort, but I get to proofread almost everything at some stage of its creation. That means that not only am I permitted to delight in language about books, libraries, Margaret Armstrong, what have you - and also to indulge my inner picky pet-peeved grammar grouch - I am in fact paid to do so. 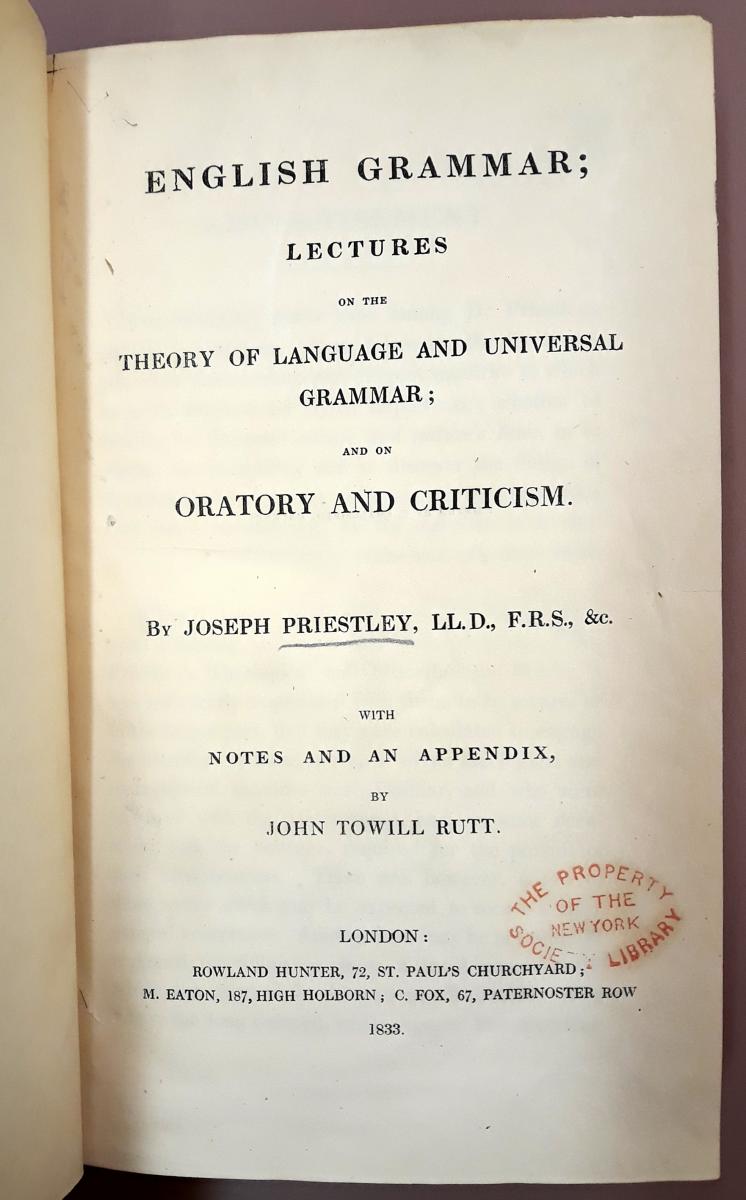 March 4 is National Grammar Day, an observance established in 2008 by Martha Brockenbrough and her Society for the Promotion of Good Grammar. I am an independent promoter of good grammar, and I strongly recommend that you check out the Society's National Grammar Day page. I'm also conscious, however, of grammar's history as a tool of power, wherein "correct" usage stomps upon "incorrect" usage to enforce class, hierarchy, or worthiness. In fact, there is no such thing as "good" or "correct" grammar. Language use is not a moral category, much as I might like it to be. Grammar and vocabulary are ever-changing, and anyone who speaks or writes adapts their style to their surroundings, consciously or unconsciously. There is, however, language use that is more or less effective. Are you saying what you're trying to say? Would your audience understand better with some changes? These are always valid questions even if you're like srsly whatevs in 280 characters or less fewer.

In the spirit of both grammar grins and grammar groans, a few books for National Grammar Day.

Because Internet: Understanding the New Rules of Language | Gretchen McCulloch (2019)
​This was a very close runner-up for my favorite book read in 2019. Although reasonably Internet-savvy, I'm not one of the kids anymore, and it was refreshing to learn that maybe they're actually all right - even freshly creative, expressive, and inclusive - in the midst of their memes, emoji, and hashtags. Also laugh-out-loud funny. For just a taste, try her website.

Between You & Me: Confessions of a Comma Queen | Mary Norris (2015)
and her other titles
I was very excited to sit at the feet of New Yorker master copyeditor Mary Norris when she visited the Library in 2016. Live editing right there in the Members' Room! Oh, it's too much happiness. Watch the video of her event here.

You Are What You Speak: Grammar Grouches, Language Laws, and the Politics of Identity | Robert Lane Greene (2011)
You Are What You Speak was the first book that really broke my Henry Higginsy habit of judging others solely by their language use. It also, remarkably, explains the breakup of the former Yugoslavia clearly and tragically through the lens of language. A remarkable, thought-provoking work. See his 2012 Members' Room event here.

Bad English: A History of Linguistic Aggravation | Ammon Shea (2014)
and his other titles
Word wizard Ammon Shea gets to the heart of why so many of us shudder when someone writes affect in place of effect, with a love of language that only a man who's read the whole Oxford English Dictionary can boast. Enjoy his 2014 Members' Room event here.

Eats, Shoots and Leaves: The Zero Tolerance Approach to Punctuation | Lynne Truss (2003)
Remember back in 2003 when Lynne Truss got us all talking about the serial (or Oxford) comma and the difference between "Let's eat, Daddy" and "Let's eat Daddy," not to mention "We invited the strippers, JFK and Stalin"? All that said, you may have my serial comma when you pry it from my cold, dead, and bony hands. Love the panda, though.

What's Your Pronoun? Beyond He & She | Dennis E. Baron (2020)
If you quailed or rejoiced at my use of the singular they in the second paragraph above, confound your assumptions with this hot-off-the-press book addressing the customs, habits, and politics of pronoun choice. 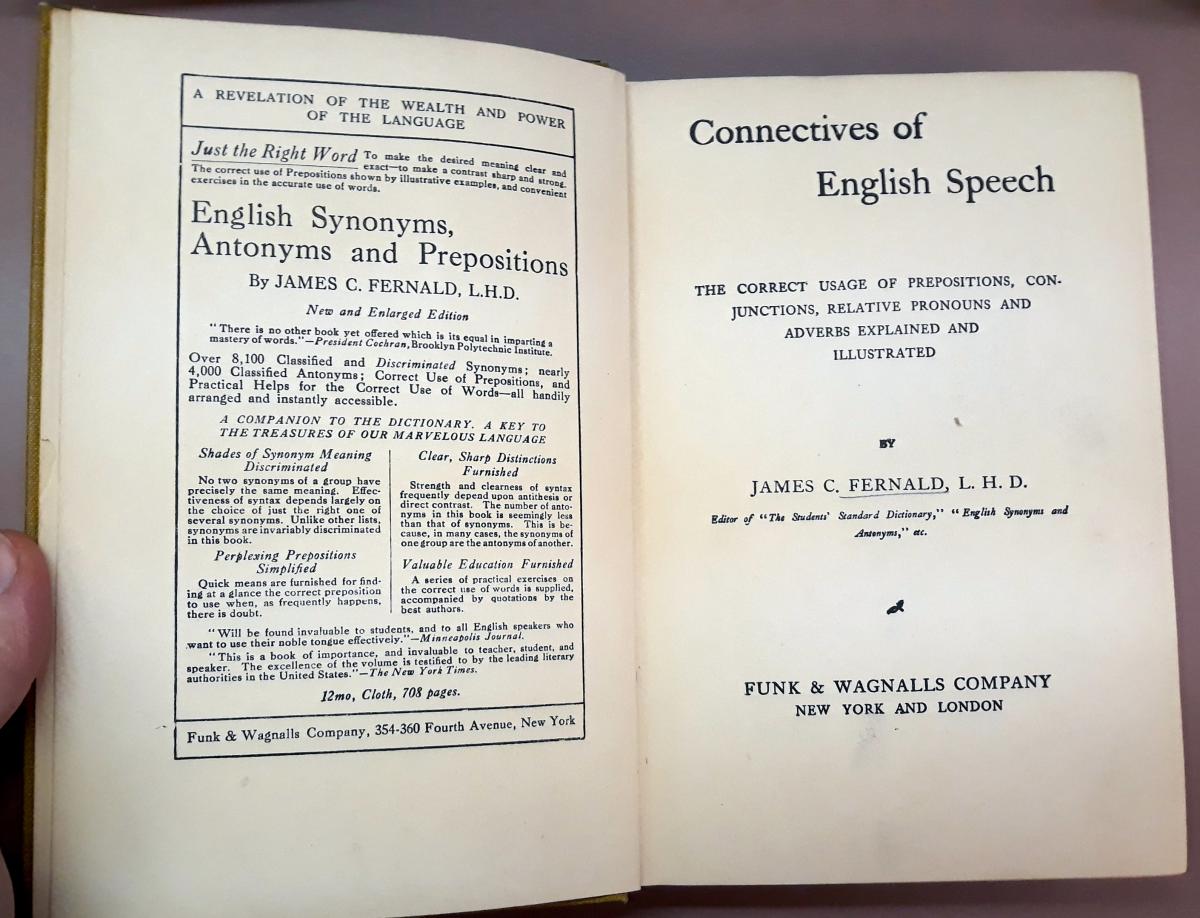 Stylized: A Slightly Obsessive History of Strunk & White's The Elements of Style | Mark Garvey (2009)
Why are we so convinced that to split an infinitive is to boldly go to the dogs? Blame (or thank) Strunk & White. Their guidelines for good grammar and style have been discussed, debated, and occasionally even debunked...but they cannot be dismissed.

Reading Style: A Life in Sentences | Jenny Davidson (2014)
A professor, critic, and insatiable reader, Jenny Davidson investigates the passions that drive us to fall in love with certain sentences over others and the larger implications of our relationship with writing style. At once playful and serious, immersive and analytic, her book shows how style elicits particular kinds of moral judgments and subjective preferences that turn reading into a highly personal and political act.

Words and Rules: The Ingredients of Language | Steven Pinker (1999)
In Words and Rules, Steven Pinker explores profound mysteries of language by picking a deceptively simple phenomenon - regular and irregular verbs - and examining it from every angle. With humor and verve, he covers an astonishing array of topics in the sciences and humanities, from the history of languages to how to simulate languages on computers to major ideas in the history of Western philosophy. There's also his The Sense of Style: The Thinking Person's Guide to Writing in the 21st Century (2014)

How Not to Write: The Essential Misrules of Grammar | William Safire (2005)
The immortal Mr. Safire and I don't agree on much, but we do both think there are some ways not to write. A wickedly witty book about grammar, usage, and style.

How to Write a Sentence: And How to Read One | Stanley Fish (2011)
Much more than a writing manual - a spirited love letter to the written word, and a key to understanding how great writing works.

Speaking American: A History of English in the United States | Richard W. Bailey (2012)
When did English become American? What distinctive qualities made it American? What role have America's democratizing impulses, and its vibrantly heterogeneous speakers, played in shaping our language and separating it from the mother tongue?

When You Catch an Adjective, Kill It: The Parts of Speech for Better and/or Worse | Ben Yagoda (2007)
In his waggish yet authoritative book, Ben Yagoda has managed to undo the dark work of legions of English teachers and libraries of dusty grammar texts. Not since School House Rock have adjectives, adverbs, articles, conjunctions, interjections, nouns, prepositions, pronouns, and verbs been explored with such infectious exuberance.

Accidence Will Happen: The Non-Pedantic Guide to English Usage | Oliver Kamm (2015)
We learn language by instinct, but good English, the pedants tell us, requires rules. Yet, as Oliver Kamm demonstrates, many of the purists' prohibitions are bogus and can be cheerfully disregarded. An authoritative and deeply reassuring guide to grammar, style and the linguistic conundrums we all face.

The Glamour of Grammar: A Guide to the Magic and Mystery of Practical English | Roy Peter Clark (2010)
Early in the history of English, the words "grammar" and "glamour" meant the same thing: the power to charm. Roy Peter Clark, author of Writing Tools, aims to put the glamour back in grammar with this fun, engaging alternative to stuffy instructionals.

The Lexicographer's Dilemma: The Evolution of "Proper" English, from Shakespeare to South Park | Jack Lynch (2009)
Grammatical "rules" or "laws" are not like the law of gravity, or even laws against murder and theft - they're more like rules of etiquette, made by fallible people and subject to change. Witty, smart, full of passion for the world's language, The Lexicographer's Dilemma entertains and educates in equal measure. 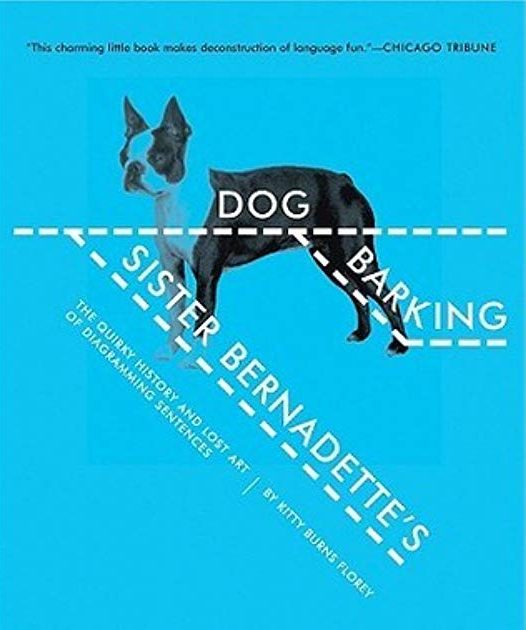 The Secret Life of Pronouns: What Our Words Say About Us | James W. Pennebaker (2011)
A social psychologist and language expert uses his groundbreaking research in computational linguistics - in essence, counting the frequency of words we use - to show that our language carries secrets about our feelings, our self-concept, and our social intelligence.

Sister Bernadette's Barking Dog: The Quirky History and Lost Art of Diagramming Sentences | Kitty Burns Florey (2006)
In its heyday, sentence diagramming was wildly popular in grammar schools across the country. Kitty Burns Florey learned the method in sixth grade from Sister Bernadette: "It was a bit like art, a bit like mathematics. It was a picture of language. I was hooked." Now, in this offbeat history, Florey explores the sentence-diagramming phenomenon, including its humble roots at the Brooklyn Polytechnic, its "balloon diagram" predecessor, and what diagrams of famous writers’ sentences reveal about them.

Woe is I: The Grammarphobe's Guide to Better English in Plain English | Patricia T. O'Conner (1996)
Another essential basic guide: With fresh insights into the rights, wrongs, and maybes of English grammar and usage, O'Conner offers down-to-earth explanations and plain-English solutions to the language mysteries that bedevil all of us.

Making Sense: The Glamorous Story of English Grammar | David Crystal (2017)
Many find grammar to be a daunting subject, but in this breezy, entertaining book, Crystal proves that grammar doesn't need to make us uneasy-we can all make sense of how we make sense. He also offers a book about spelling.