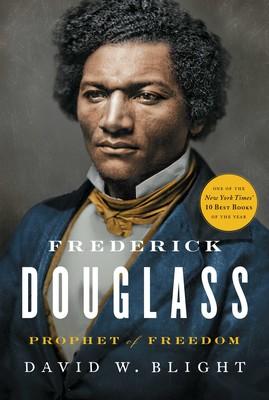 For Black History Month, we present a selection of noteworthy recent arrivals that explore African American history and biography. Children's and Young Adult books selected by our children's librarians are featured below, and a (much) longer list of recent acquisitions follows the children's books.

Frederick Douglass: Prophet of Freedom | David W. Blight (ebook also available)
Blight, a Professor of History at Yale, has written the first major biography of Douglass in nearly three decades. The book was praised widely in reviews and appeared on many best-of-2018 lists.  Henry Louis Gates, Jr., described it as a “monumental achievement,” and a NYSL staff member said it was “magnificent, rising to the grandeur of its subject.” The Library also recently acquired The Speeches of Frederick Douglass: a Critical Edition  (John R. Mckivigan, et al., eds.), a Yale University Press publication that includes many of Douglass’s speeches along with commentary and criticism by his contemporaries and modern scholars.

What Truth Sounds Like: Robert F. Kennedy, James Baldwin, and our Unfinished Conversation about Race in America | Michael Eric Dyson
In 1963, Robert Kennedy asked James Baldwin to organize a meeting of prominent African-Americans to hear their views on combating segregation and discrimination. Baldwin invited Lorraine Hansberry, black activist Jerome Smith, Harry Belafonte, and Lena Horne. The meeting was frustrating for both Kennedy and his guests, and Dyson (University Professor of Sociology, Georgetown University) uses the discussion as a “jumping-off point for an incisive look at the roles of politicians, artists, intellectuals, and activists in confronting racial injustice and effecting change” (Kirkus).

Smoketown: The Untold Story of the Other Great Black Renaissance | Mark Whitaker
The “other” in the title refers to Pittsburgh, Pennsylvania, and Whitaker “reveals its rich black heritage from the late 19th century to the 1950s,” a "glorious stretch" as "one of the most vibrant and consequential communities of color in U.S. history” (Kirkus).

Bound In Wedlock: Slave and Free Black Marriage in the Nineteenth Century | Tera W. Hunter
Hunter’s scholarly book (Harvard U. Press) is the first comprehensive history of African American marriage in the nineteenth century, uncovering experiences in plantation records, legal and court documents, and pension files. The book was widely acclaimed and won several awards. Library Journal calls it “an important and comprehensive work that is worth reading by all, especially those interested in the effects of slavery on society today.”

Unexampled Courage: The Blinding of Sgt. Isaac Woodard and the Awakening of President Harry S. Truman and Judge J. Waties Waring | Richard Gergel
Gergel, a federal judge from South Carolina, argues that this rarely mentioned 1946 race-based crime altered officially sanctioned segregation of blacks, and influenced Truman’s decision to establish a commission to study the problem of civil rights and issue an executive order desegregating the military. “Gergel’s book is a revealing window into both the hideous racial violence and humiliation of segregation in the period immediately after World War II, and the heroic origins of the legal crusade to destroy Jim Crow… an engrossing history, animated by the stories of several key characters” (New York Times).

Never Caught: The Washingtons' Relentless Pursuit of their Runaway Slave, Ona Judge | Erica Armstrong Dunbar
Library Journal: “As President George Washington's second term was coming to a close, one of his household slaves escaped to freedom, never to return. Oney ‘Ona’ Judge (1773-1848) was born into slavery and worked as a dressmaker and attendant for First Lady Martha Washington. Her story is remarkable for its daring, success, and what it reveals about the personal lives and beliefs of the Washingtons. Judge fled to New Hampshire where she lived for nearly another half century as a freewoman, despite repeated attempts by an angry Washington to capture and return her to his plantation.” Never Caught was a National Book Award finalist in 2017. On November 1, 2018, Erica Dunbar presented a lecture on Never Caught in our Members' Room and if you missed it you can watch a video here on our website.

Separate: The Story of Plessy v. Ferguson, and America's Journey from Slavery to Segregation | Steve Luxenberg
Library Journal: “Luxenberg presents a masterly narrative of [Plessy v. Ferguson] and its roots, dating back to 1838, relating a complex story told through the lives of Supreme Court Justices John Marshall Harlan and Henry Billings Brown; Albion Tourgee, author, lawyer, and civil rights firebrand; and the 11,000 free people of color of New Orleans…Likely to become the seminal work on this crucial Supreme Court decision.”  This recent piece in the New Yorker on Plessy v. Ferguson by Louis Menand discusses Luxenberg’s book.

African-American Art: A Visual and Cultural History | Lisa Farrington
Lisa Farrington is the founding Chair of the Art and Music Department at CUNY/John Jay College. The College Art Association called this survey of African American art “invaluable for any reader interested in the subject… Encompassing art and material culture of multiple media, including architecture and photography, from the Colonial period through the present day, Farrington’s volume provides an extensive visual, cultural, and historical study of African American artistic production.”

I Too Sing America: The Harlem Renaissance at 100 | Wil Haygood, et. al
I Too Sing America is published in conjunction with a major exhibition at the Columbus Museum of Art and offers a generously illustrated chronicle of the lives of the people, art, literature, music, and social history of the Harlem Renaissance. Curator and editor Haygood has written several acclaimed books of African American history and biography.

An American Odyssey: The Life and Work of Romare Bearden | Mary Schmidt Campbell
Mary Schmidt Campbell drew on interviews with Bearden (1911-1988), as well as archival material, to write a major biography that chronicles his career from the 1930s as a Diego Rivera-inspired painter in Harlem to his abstract collages of the 1960s. Bearden’s work and life spans across significant shifts in 20th-century art and politics, and his friends and collaborators included Alvin Ailey, Ralph Ellison, and Albert Murray. “By navigating the historical, social, and political contexts informing black aesthetics and Bearden's unique oeuvre, Campbell has produced an invaluable work” (Booklist).

Trailblazer: A Pioneering Journalist's Fight to Make the Media Look More Like America | Dorothy Butler Gilliam
The memoirs of a pioneering journalist. Gilliam got her start with black newspapers in the south and covered the integration of Central High School in Little Rock, Arkansas. She arrived at the Washington Post in 1961 as the first black reporter on the staff and covered the integration of the Universtiy of Mississippi. Booklist gave her memoir a starred review, and Kirkus called it an “important document.” Mark your calendars: On March 14th, the Library presents Gilliam in conversation with Pamela Kewkirk in the Members’ Room for what is sure to be an interesting evening. More information about that can be found here.

Looking For Lorraine: The Radiant and Radical Life of Lorraine Hansberry | Imani Perry
Best-known for writing the hit play A Raisin in the Sun, Lorraine Hansberry’s short life (she died at 34), was full of extraordinary experiences and achievements. She was committed to social justice, and her circle of close friends included James Baldwin and Nina Simone. Biographer Imani Perry is a Professor of African American Studies at Princeton University, and her “ardent, expert, and redefining work of biographical discovery brings light, warmth, scope, and enlightening complexity to the spine-straightening story of a brilliant, courageous, seminal, and essential American writer” (Booklist).

The New Negro: The Life of Alain Locke | Jeffrey C. Stewart
Words like “magisterial” and “definitive” appear frequently in reviews of this biography of a major figure in black intellectual history. In what the New York Times calls a “master class in how to trace the lineage of a biographical subject's ideas and predilections,” Jeffrey Stewart (professor of black studies at the University of California) traces Locke’s mentoring influence on the work and careers of figures such as Langston Hughes, Zora Neale Hurston, Jean Toomer, Jacob Lawrence, Richmond Barthé and others.

A Girl Stands at the Door: The Generation of Young Women who Desegregated America's Schools | Rachel Devlin
In the late 1940s, parents began to file desegregation lawsuits with their daughters, forcing civil rights lawyers to take up the issue and bring it to the Supreme Court. After the Brown v. Board of Education ruling, girls far outnumbered boys in volunteering to desegregate formerly all-white schools. In A Girl Stands at the Door, historian Rachel Devlin tells the remarkable stories of these desegregation pioneers. “The book is thoroughly researched, and Devlin is to be applauded for her extensive use of interviews with various well-known and not-so-well-known former child plaintiffs and ‘firsts’” (Choice).

Freedom over Me: Eleven Slaves, Their Lives and Dreams Brought to Life | Ashley Bryan 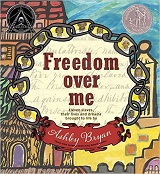 Using original slave auction and plantation estate documents, Bryan contrasts the monetary value of a slave with the priceless value of life experiences and dreams that a slave owner could never take away.

Breakthrough!: How Three People Saved "Blue Babies" and Changed Medicine Forever | Jim Murphy
The story of the landmark 1944 surgical procedure that repaired the heart of a child with blue baby syndrome. The team that developed the procedure included a cardiologist and a surgeon, but most of the actual work was done by Vivien Thomas, an African American lab assistant who was frequently mistaken for a janitor.

Twelve Days in May: Freedom Ride 1961 | Larry Dane Brimner
For twelve days in May 1961, thirteen black and white civil rights activists, also known as the Freedom Riders, traveled by bus into the South to draw attention to the unconstitutional segregation still taking place.

Poet: the Remarkable Story of George Moses Horton | Don Tate
Relates the story of North Carolina slave George Moses Horton, who taught himself to read, learned to write, and became a well-known, published poet in spite of his slave status.

Freedom in Congo Square | Carole Boston Weatherford
Six days a week, slaves labor from sunup to sundown and beyond, but on Sunday afternoons, they gather with free blacks at Congo Square outside New Orleans, free from oppression.

Steamboat School: Inspired by a True Story: St. Louis, Missouri: 1847 | Deborah Hopkinson
In 1847 St. Louis, Missouri, when a new law against educating African Americans forces Reverend John to close his school, he finds an ingenious solution to the new state law by moving his school to a steamboat in the Mississippi River.

Radiant Child: the Story of Young Artist Jean-Michel Basquiat | Javaka Steptoe
Jean-Michel Basquiat and his unique, collage-style paintings rocketed to fame in the 1980s as a cultural phenomenon unlike anything the art work had ever seen. Award-winning illustrator Javaka Steptoe's vivid text and bold artwork echoing Basquiat's own introduce young readers to the powerful message that art doesn't always have to be neat or clean—and definitely not inside the lines—to be beautiful.

Preaching to the Chickens: the Story of Young John Lewis | Jabari Asim
Critically acclaimed author Jabari Asim and Caldecott Honor-winning illustrator E. B. Lewis give readers a fascinating glimpse into the boyhood of civil rights leader John Lewis. John wants to be a preacher when he grows up: a leader whose words stir hearts to change, minds to think, and bodies to take action. But why wait? When John is put in charge of the family farm's flock of chickens, he discovers that they make a wonderful congregation!

Hoodoo | Ronald L. Smith
In 1930s Alabama, twelve-year-old Hoodoo Hatcher is the only member of his family who seems unable to practice folk magic, but when a mysterious man called the Stranger puts the entire town at risk from his black magic, Hoodoo must learn to conjure to defeat him.