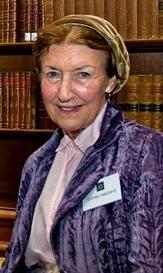 Shirley Hazzard, who passed away last week at the age of 85, was a beloved author who served on the Library's Board of Trustees beginning in 1974. She was named Trustee Emerita in 2013. 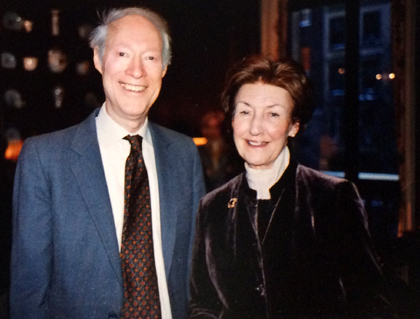 Ms. Hazzard's beautifully written and nuanced books range from fiction such as The Transit of Venus and The Great Fire, commentary like Countenance of Truth: The United Nations and the Waldheim Case, and the memoir Greene on Capri. Her many honors include the 2003 National Book Award for The Great Fire. Her most recent volume is We Need Silence To Find Out What We Think: Selected Essays, edited by Brigitta Olubas and published by Columbia University Press earlier this year.

The Library is honored to have had a long association with Ms. Hazzard and her husband, Francis Steegmuller, who died in 1994. As a trustee, she served longest on the Book Committee, applying her wide-ranging literary knowledge to recommending new books for the collection and treasuring the older ones.

"Of course I regard the Library as a refuge and a treasure house. But I also regard it as a powerhouse. I think it is real life and I fear for people who miss this because they are missing a great energizing force, even something frightening. For instance, when I look at the novels of Thomas Hardy on the shelf, I fear if I see Tess of the d'Urbervilles that I will read it again and have to suffer so much and have to understand so much more than I am willing to understand. These things go on in libraries.

A library should be a place where you go into your own heart, into a heartland of understanding. It's also a place where you don't necessarily feel comfortable because of what you read. There may be something that you had hoped not to have to learn about. George Orwell said, "If freedom means anything, it means the right to tell people what they don't want to hear," and every good library should have a fair amount of that in it.

The book is a thing irreplaceable, not because every book is a good book or should even exist, but it is one of the best things invented by man, I would say, and these walls are full of them. A library has to be somewhere where every book can be a potential explosion."

We were also delighted to host the first international conference about Ms. Hazzard's work in 2012, with a distinguished panel comprising Gail Jones, Jay Parini, Martin Stannard, Brigitta Olubas, and Annabel Davis-Goff. Jonathan Galassi moderated, and the evening was introduced by Consul General Phil Scanlan AM. Watch the event video here:

Whether I wake these mornings in Naples to the Mediterranean lapping the seawall or on Capri to the sight of a nobly indifferent mountain, it is never without realizing, in surprise and gratitude, that I - like Goethe, like Byron - am living in Italy. (The Ancient Shore: Dispatches from Naples)