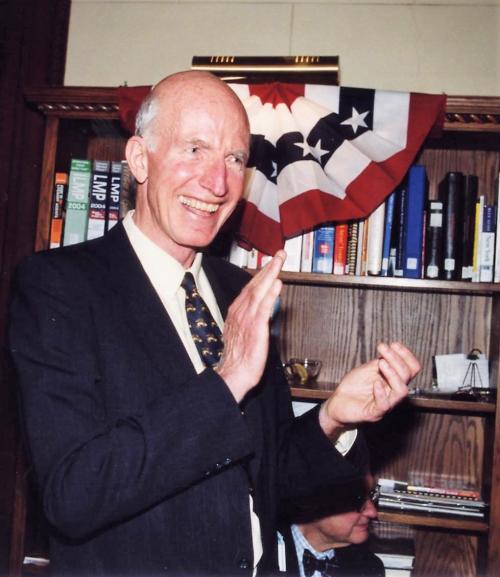 William J. Dean, who passed away on August 16, was a defining figure in the life of the New York Society Library for three decades. A member of the Library beginning around 1970, he joined the Board of Trustees in 1989 and served as Chair of the Board from 1992 to 2005. His 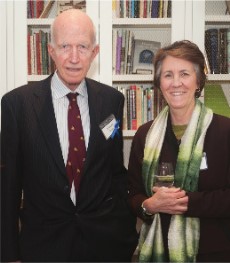 time as Chair saw the Library emerge into the shape it is today. It included the beginning of Library events, the creation of our website, the founding of the New York City Book Awards, the start of Project Cicero, and the celebration of our 250th anniversary. Following his time as Chair, Bill continued his engagement with the Board, becoming the founding chair of the Goodhue Society (our legacy society) in 2010.

He was also a writer, publishing My New York: A Life in the City in 2013 (with a debut in the Members’ Room), Into Distant Countries: Travels and Personal Journeys in 2014, and Before Us on the Road: Passages from My Reading in 2019. His op-eds and personal essays appeared in The New York Times, The Wall Street Journal, The Christian Science Monitor, and most recently in a regular column for Indian Economy & Market magazine - read his August 7 essay about summer memories here.

To his many roles at the Library Bill brought elegant public speaking skills, efficient leadership, good-humored encouragement, and a boundless enthusiasm for New York City, for books, and for those who loved both, past and present. His Annual Report as Chair from the spring of 2003 consisted entirely of his fantasy about visiting the Library in 1758 when it was one City Hall room. “As a lawyer,” he says, “I would be duty-bound to glance at Acherley's Britannic Constitution in folio, Grotius' On the Law of War and Peace; Cicero's Orations in three volumes, and select trials at the Old Bailey,” but ultimately, “As closing time approached...I would select Tom Jones.” Elsewhere he waxed lyrical about the collection: “Chekhov has become my favorite writer. I have a framed picture of him on my office wall. And all because I came upon him one day while exploring Stack 5. Library members, what adventures await you in the stacks!”

Left: Bill Dean (second from left) at our first official Library performance in May 1995, featuring Sam Waterston as James Boswell; Right: Bill (right) with Elihu Rose and Kenneth T. Jackson at the presentation of the first New York City Book Award, May 1996. 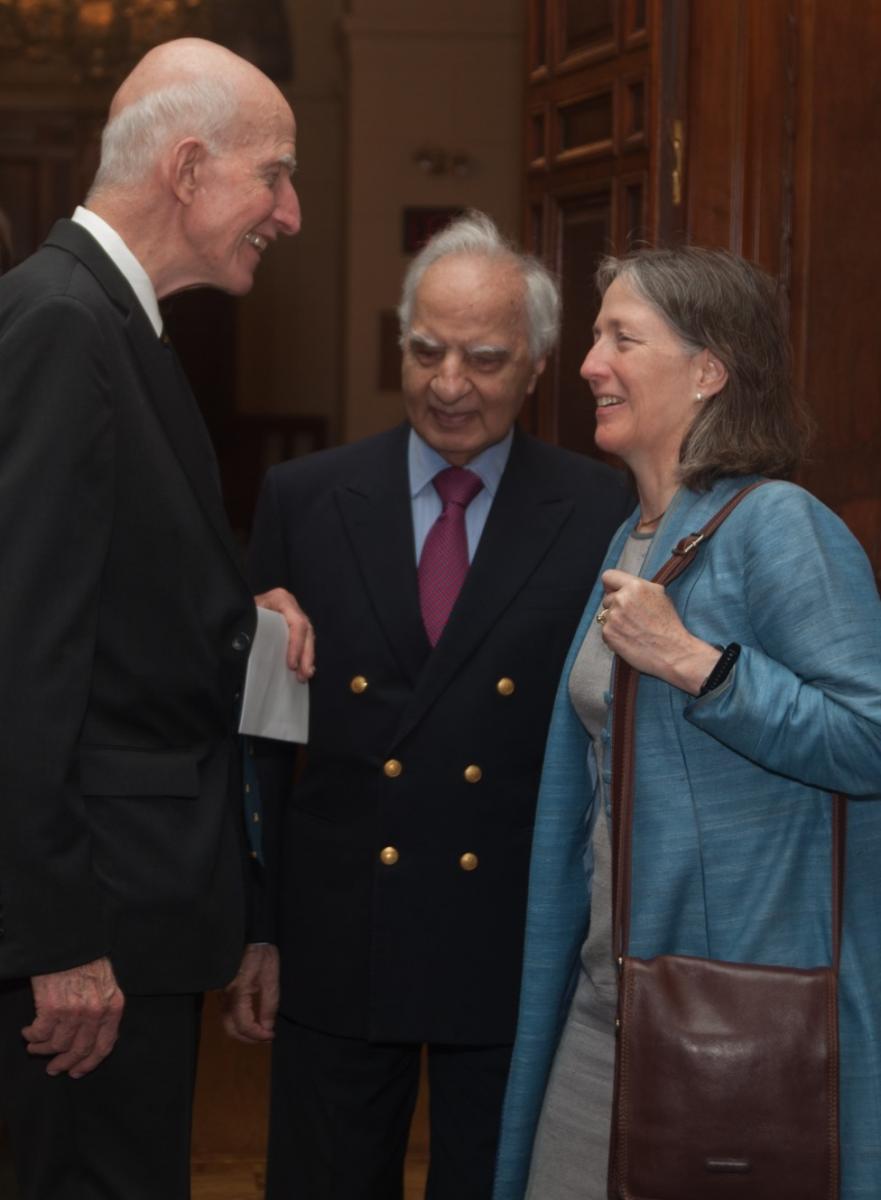 “I share your sadness about losing Bill.  I first met him when I was interviewed for the Board by him, Henry Cooper and Barbara Stanton, and it is sad to reflect that those stalwarts are all now gone.  I particularly got to know Bill during his tenure as chair, as he slyly persuaded me to step up to the plate and succeed him in that role he filled so well.  We had many lunches in Soho near his office at Volunteers of Legal Service, and I always appreciated his kindness and selfless spirit.  He loved the Library and the city and will be greatly missed.” - Trustee and former Board Chair Charles G. Berry

“When Bill Dean asked me — so long ago that I can no longer recall the year — to join the Library’s Board, I told him I had a rule against joining boards. Instead of accepting that, he began talking about the Library’s ideals and how faithfully it was living up to them.  I still remember the passion and elegance with which he spoke; I dropped my rule and joined. During the years since, I have been very happy that I did that, not least because I could watch Bill’s devotion to this institution that he loved.

"Bill lived a life, it seems to me, of great simplicity, with a fierce devotion to a few causes, all noble ones.  Every time we spoke, I felt I was talking to someone from another — better — age. I’ll miss him and the Library will miss him.” - Trustee Robert A. Caro

“Bill Dean was a gentleman, a scholar, a teacher, a humorist, a New York aficionado, and so much more. He was someone who made you happy just by seeing him enter the room. I wish I had met Bill sooner, but I am ever grateful that the Society Library introduced him to me.” - Trustee Ella M. Foshay

"I am so sorry to hear this news. It comes as a big surprise as Bill seemed so vigorous. He was a gem and an original, and I recall not too long ago his asking me if our six-four son wanted to join him for a basketball game together! I hope that we can create a special collection in his name or a fitting tribute to him at the library, which he loved so dearly and for so long. With profound sadness-"  - Trustee Ellen M. Iseman

"Bill was a great Library member and trustee. I am sure you join me in appreciation of Bill’s 31 years of service. Among Bill’s most salient traits were his loyalty, candor and authenticity. I appreciated his mentorship (and his humor) deeply.

Bill joined the Board of The Society Library in 1989 and served for 12 years as Chair from 1992 until 2005. Bill’s service to the City and its institutions was wide ranging and extraordinary.  He served for 24 years as Executive Director of Volunteers of Legal Service, as Chair (twice) of The Correctional Association of New York, for 30 years as the teacher of a public policy course,“New York:  Problem City in Search of Solutions,” at The New School and for 13 years as van driver every Wednesday night for the Coalition for Homeless. Bill received The New York Public Library’s Brooke Astor award for “Unsung Heroes of New York City.His other social service pursuits are too numerous to mention.

All of us were surprised by Bill’s sudden death. He emanated vigor. Those of you who have been following Bill’s blogposts will know that he had planned a visit to India in April (cancelled by Covid-19). Until March he enjoyed his regular basketball games at the Lenox Hill Neighborhood House." - Board Chair Carol Collins Malone

“How very surprising and sad. Bill was such a wonderful friend, talented writer and loyal Library trustee. I know that we will all miss him very much!” - Trustee Jean Parker Phifer

“Bill was Chair of the Board when I joined. He was very welcoming to and appreciative of new trustees. Among his many other activities and good works, he was always a strong and continuing supporter of the Children’s Library and Project Cicero. I am very saddened by his passing and will miss his presence at our Board and Committee meetings as well as his annual visit to Project Cicero’s yearly distribution.” - Trustee Susan L. Robbins 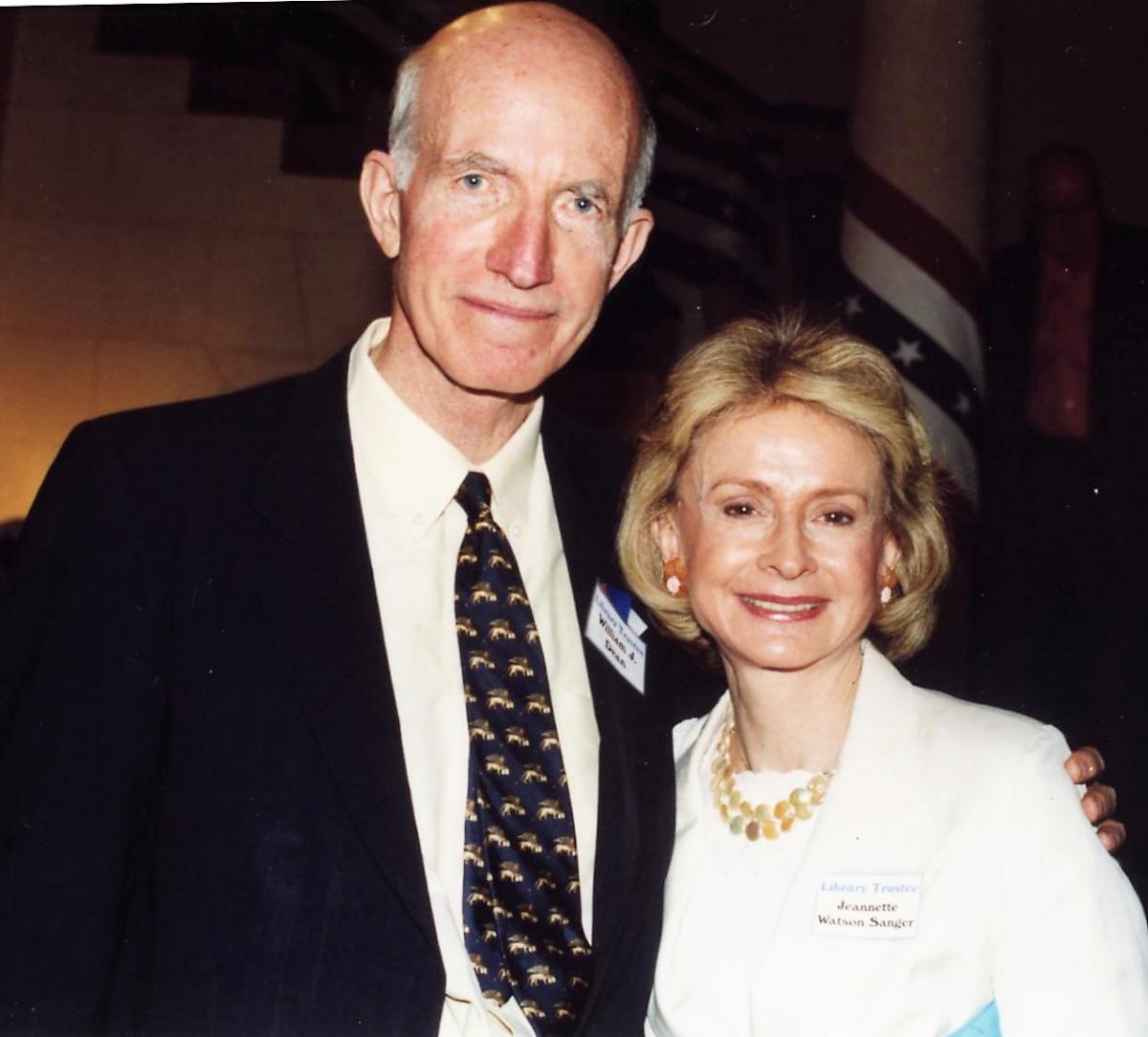 “I knew Bill ever since I was a new New Yorker fifty years ago. Such a dear man and cherished friend. Just to think of his wonderful smile and never-failing geniality, plus the whimsy found in his Christian Science Monitor column and other newspaper articles and travel journals. I will so miss bumping into Bill at the Century Club, and of course Ted [trustee Theodore C. Rogers] feels the same way and will be ever-grateful for Bill's bringing him onto the Board of the Library. And then there was Bill's never-failing love of Central Park, one that really matched my own sense of it as the most generous, humane, and beautiful place in New York City. With tears in my eyes – “ - Author and Central Park Conservancy Founder Betsy Barlow Rogers

“I shall miss him very much - his dedication - his humor - his essays - and his joie de vivre. He is probably the last person who will address me as ‘Young Lady.’” - Trustee Jeannette Watson Sanger (at right with Bill at the 250th anniversary celebration)

"Bill Dean—an extraordinarily kind, compassionate and scholarly gentleman who truly understood how difficult life is for most people, and did so much to make it better for them. We will all miss him." - Trustee Betty Kelly Sargent

“Bill was such a lovely man and clearly so devoted to the NYSL. I will miss his presence at our meetings. A loss to the Library, indeed.” - Trustee Francesca Stanfill

“I feel as if I saw Bill just as often on the streets of the Upper East Side on his way to or from his regular basketball games as I did here at the Library. He was always so full of vim, vigor, wit, and intellectual curiosity. We’d fall into step, chatting about the Library, the books we had read, and his latest projects. When I told him I had enjoyed his book Into Distant Countries: Travels and Personal Journeys, I mentioned that he might like Montaigne’s Travel Journal, another book of travel essays that has always been a favorite of mine. The next time we ran into each other on the street, he was deep into the book, which he had retrieved from our stacks, and said that he was finding some choice bits. Of course, he was already working on his new project, and introduced me to the concept of the commonplace book, which he turned into Before Us On the Road: Passages from my Reading. Bill was a true New Yorker, and I, for one, will miss his stories about life in NYC, and will dearly miss our pleasant, random encounters on the streets in the neighborhood.” - Head Librarian Carolyn Waters