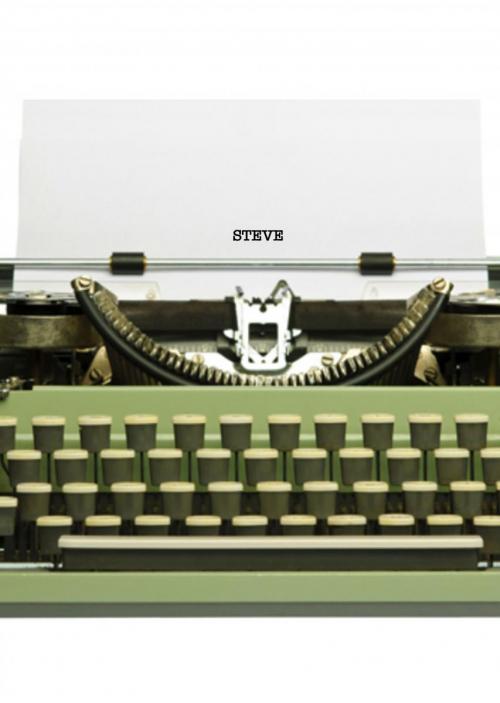 These poems were created by participants in Write What Life Feels Like Now with Esther Cohen in response to the prompt STEVE.

what was wrong with my sticking to your own kind? they demanded

we were a couple late-fifties-early-sixties-style: movies dances parties    he played basketball

except for the close part    the kissing part

the part that was between us and only us    did I want to be devoured or devour?

a clean cut    a sharp knife

grow up it said    childhood is over    Harvard or the shiksa

Steve, Armenian from a working
Family from Quincy,
Attended Brandeis and looked
Jewish with a mop of
Curly black hair, bad
Eyes from squinting to read
Books about the Chilean
Socialist Government, popular
With the countrymen, then
Squashed in a coup
Supported by US.

A cartoonist, once censored
By the school newspaper for
Depicting Golda Meir as
Moses, smashing the tablets
On the heads of very tiny
Line drawings of
Palestinians.

I heard he is running a pizza
Parlor in the Back Bay,
Slices free for the homeless.

Reena Bernards
Reena is a family therapist, activist and writer, living in Maryland.

You were my back-up boyfriend in college
Until you got a green Austin Healy sports car.
Then you were my fiancée.

We graduated to a recession.
You went from a white to a blue collar job
with your dad at Three Mile Island.
I opened a weaving shop.
I became a pot smoking hippie, while
you became a beer drinking ironworker.

You got the house.
I got free.
I never saw you again.

You see, I've had the most amazing life
because I chose Freedom.

And I still weave.

Linnie York
Linnie York is a former Library member and lives in Connecticut.

I recently watched Stephen Colbert’s google talk from 2012.
He and Eric Schmidt laughing over how smart and witty they were
In a room full of google employees

How optimistic we were then -
He was promoting his new book:
America Again; Rebecoming The Greatness We Never Weren’t

I wonder how the country would be different
if he was just Steve Cole-bert,
some unknown comedian

J.H. Loyal
J.H. Loyal grew up on the hills of Ohio and the flats of Florida, and now calls Brooklyn home.

Steve played the viola in the chamber music group.  Viola jokes were ok with him.

My friend Steve just died of a brain tumor.  He was charming, the funniest guy I ever knew –  traits not always associated with his profession as a lawyer.  I am sure that every nurse and doctor tried extra hard to keep Steve alive just because he was so much fun to be around. He could joke about anything even while understanding that not everyone had the same humorous take on the world.  He made converts of the most determined skeptics.

For years, everyone liked talking with Steve to get his take on the current political outrage or the latest judicial ruling or the newest jazz recording that caught his fancy or the best glass of wine he had recently encountered. Even after he got sick, Steve went right on sharing his opinions and his passions for life. Self-pity was not his style. He always asked how others were, always spreading laughter as if it was a new spring crop. Now that he is dead, everyone wonders how something so sad could have happened. It is as if laughter was the best medicine for everyone but him.

When she was pregnant
when she was not too tired
we had a game we played
called Name That Son.

Midnight snacks and late night movies
we'd catch a flick and then the credits
every given name a nominee -
writer, producer, actor,
director, stuntman, gaffer,
best boy . . .
Of course we already knew
he'd be the best boy.

“What about your father?" she asked.
"What about my father?"
"Stephen's a lovely name."
"Already taken.”
“What about Stéfan?”
“Stéfan! Stephen with a twist.”
“But always Stéfan.”
“Always.”

It was settled, then.

D.S. Preniszni
A Pushcart Prize nominee, D.S. Preniszni has been published in The Village Voice, The Boston Phoenix, and Inkwell Magazine among other publications. He once sang for Ray Charles.

I knew him in my infancy

He kept on hovering over my creche

to have been adoration of me

which made me confused.

I believe he came from a large Italian family

but I had no concept of family then,

connected to me that was and is peculiar; so

how do I know any of this I can’t say,

except that people in my family

perpetuated the story of someone who

used to drop in occasionally to our house

and take coffee with everyone but

me. Naturally I was too young

to drink anything but mother’s milk

whether from a bottle or on the

hoof I can not say. They

deny this – no one admits to strangers

visiting during that period of

so this is a memory come from my infancy –

surprising as the claim may

seem, I do not make a claim thereby

for precocity. My family certainly

they thought I became

odder as I got older, not accepting

have some element in the matter.

Members of the workshop also wrote this poem on STEVE together, each participant adding a line:

Once I lost touch with Stephan he became Stephen. This made me sad. He was a banker of all things and had rebutchered himself.

I wonder how the world would be different if he was just Steve Colbert, some unknown comedian.

She wants him, Steve, to understand they could be friends, but not the kind he wants to be.

There’s an Eve in Steve.

Steve played the viola in a chamber music group. Viola jokes were OK with him.

My ex-brother-in-law Steve got his second wife during his Medical Training and became a psychoanalyst in that order.

Steve told me late one night that I really wasn’t that intelligent. What you are is curious he said, and I cried.

Everybody knows about Steve. From the cradle to the grave he’s made a difference to somebody. If laughter could save a life, Steve would live forever.

How many Steves have you known in your life?
Too many I said.

Stevedore he’s on the wharf, loading and unloading ships, and dreaming of the places tuned for joy, that a ship could ever, in your wildest fancy take you.

I could never stay up late, so Steve rehearsed reading at the foot of the bed. Then go to the Mudd Club and perform.

When dinner was done, Steve liked to slip away from the table and head up to the narrow gallery that cantilevered over the dining area to listen to his short wave radio: Boats out on the water. Trucks along the coastline less than a mile away. And his neighbor three houses down.

Let’s keep it between us. Even Steven. Until this all falls apart.