This is one of the most colorful images in the collection, showing Abe Lincoln as the Great Comet of 1861, which was visible in the night sky for nearly three months. (Unknown printer, c. 1860 or after.) 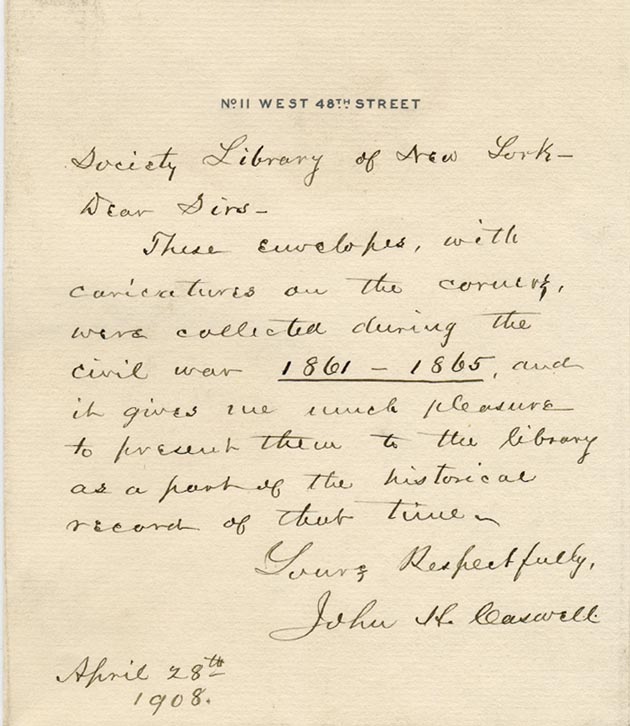 Believe it or not, the envelope is a relatively modern invention. In the centuries before the industrial production of paper and the modern postal system, letters were usually sealed up and sent off without wrappers of any kind. Envelopes were manufactured en masse c. 1850, at a time when printing text and images was easier and more cheaply done than ever before. Although the trend didn’t last, propaganda and advertisement envelopes were common collector’s items in both America and Britain during these early years of envelope manufacturing. In America, the popularity of the envelope coincided with one of the most important moments in our history. Maurice Rickards’s The Encyclopedia of Ephemera tells us that the “best-known memorabilia of the Civil War is the ‘patriotic envelope’, a craze which swept the country on both sides of the battle-front,” and this is exactly what we find in Caswell’s collection. The album contains over 400 colorful samples of envelopes produced in both Union and Confederate states (recent research suggests that over 6,000 designs were printed), providing a snapshot of the trends of the era both in terms of form and content. As an industrial society the Union produced far more envelopes than the agrarian Confederacy, which struggled throughout the war to print such essentials as bank notes and postage stamps.

The Library owns a small collection of Civil War Envelopes collected by John H. Caswell, and donated in 1908.  A miner born to German tea merchantes in New York in 1846, Caswell collected the envelopes as a teenager, when the war was ongoing.  The vast majority of envelopes in his collection were manufactured in the Union (and so disparage the South), but he did manage to acquire a few of the much rarer Confederate-made prints. 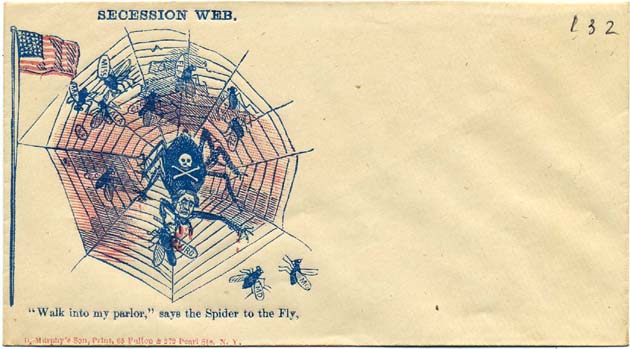 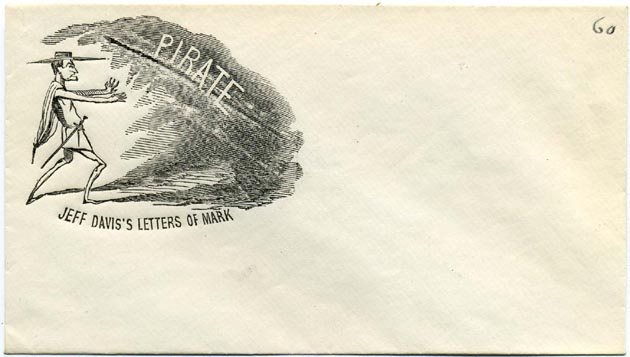 The Caswell envelopes are typical of genre: the illustrations show clever and often satirical portrayals of popular people and events of the day in caricature, with witty and incisive subtitles playing on popular American narratives and current events. Prominent politicians or military figures like Abraham Lincoln and Jefferson Davis or Winfield Scott and P.G.T. Beauregard were either honored and deified or satirized and vilified, depending upon the publisher’s orientation to the Mason-Dixon Line. Jefferson Davis was frequently depicted as a pirate in caricatures.  In this image, “Jeff Davis’ Letters of Mark” is probably a misspelling of “Letters of Marque and Reprisal,” which were given to private citizens by countries which could not afford large navies.   The illustrations often employed racist or allegorical female imagery and wordplay, an unfortunate but revealing aspect of these documents and in the culture in which they were produced and exchanged. 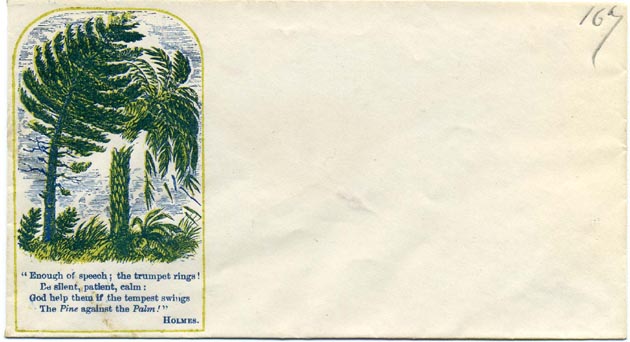 Caswell’s collection demonstrates the extent to which the politics and events of the Civil War were absorbed into a popular commercial product, and provide invaluable insight into 19th century American sense of humor. None of these envelopes were ever addressed or stamped, but rather placed carefully into the neat glacine corners which still hold them in place.  Take a look at the images below to see some examples of the kinds of images found in Caswell's collection.  Digital collections of Civil War Envelopes created by libraries across the country, including the New-York Historical Society (via the Library of Congress's American Memory Project), the Wisconsin Historical Society, and Georgetown University Library, make it possible to explore thousands of images from your desktop whenever you wish.  Or, for a closer look at Caswell’s envelope collection, you can schedule an appointment to view his album in person by contacting the Special Collections department by email at rare_books@nysoclib.org. 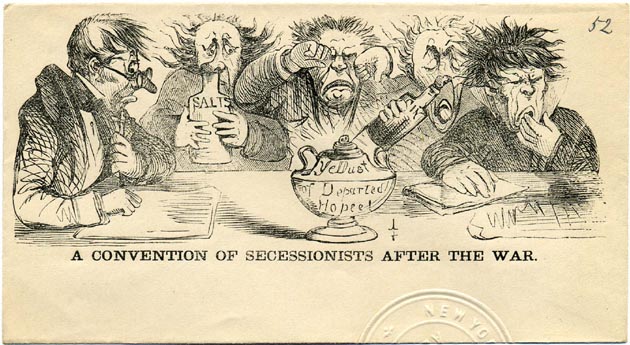 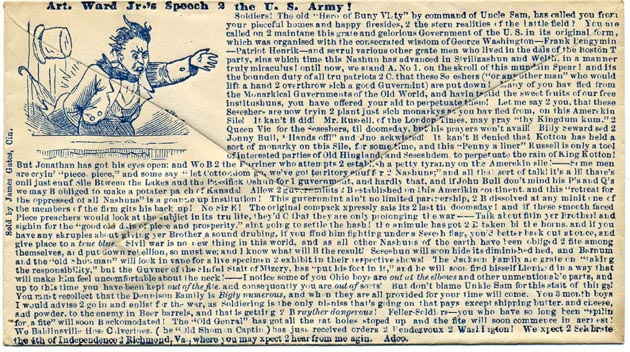 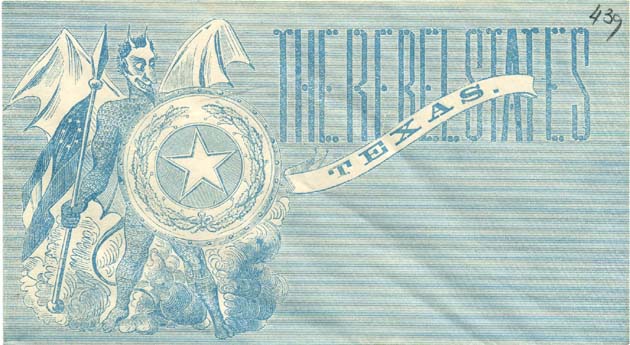 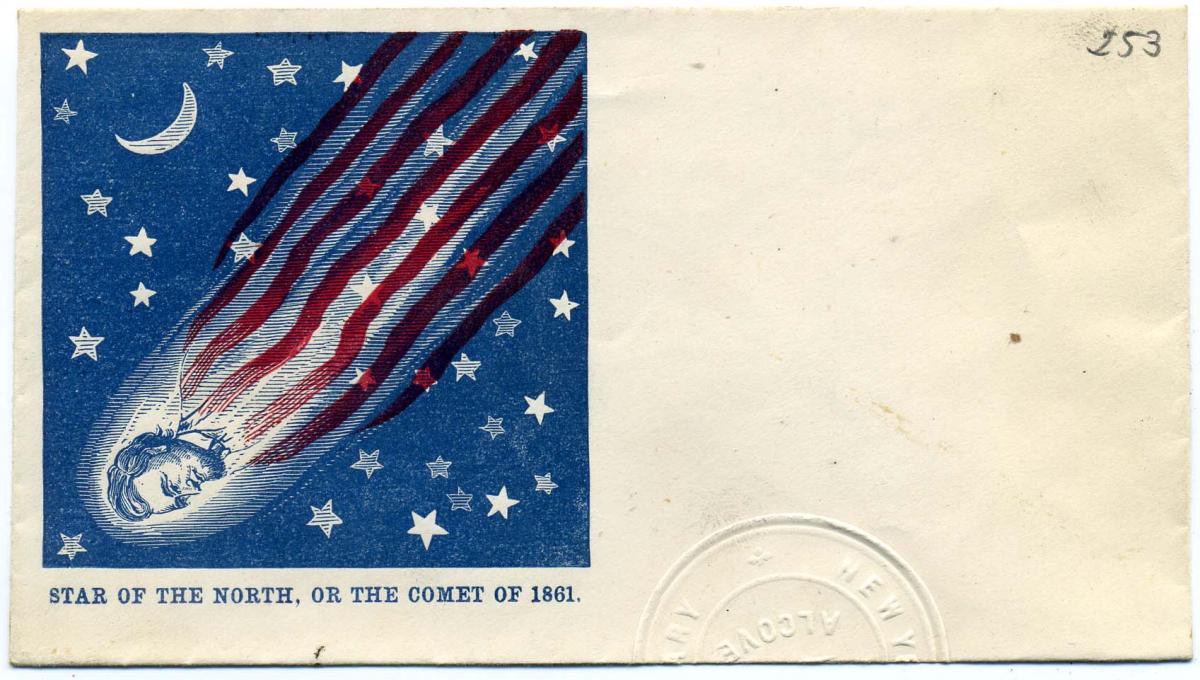