Home > Library Blog > When They Were Our Neighbors 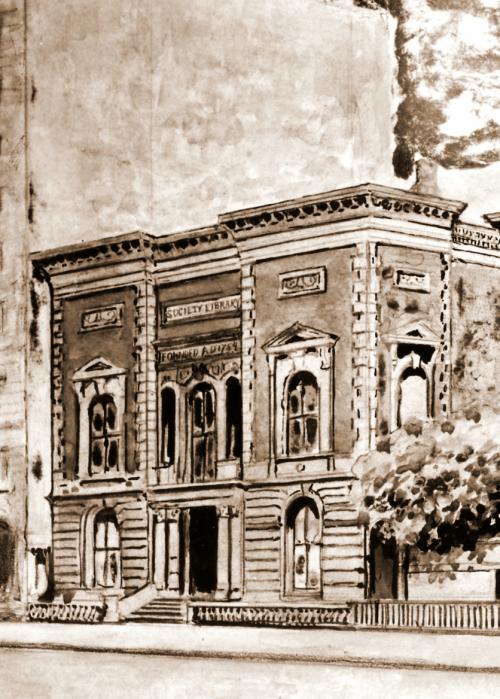 When They Were Our Neighbors

Since we’re the oldest cultural institution in the city, New York City has a special place in our hearts. Notable figures - the writers, the artists, the poets, the librarians, and other bookish types - seem to gravitate to New York City and to our own doors in our five locations. We brag about the likes of Herman Melville, Willa Cather, and Henry James, our members who have marked history. However, who else’s footsteps are you walking in when you visit our neighborhood? Let’s go on a walk together and see who we meet! (At left is our former building on University Place near 12th Street, visited by...read on to find out.)

Best known as Mozart’s librettist, Da Ponte donated 600 volumes of books in Italian to our Library (known as the Da Ponte Collection). Da Ponte was a colorful character in his own right. Jewish by birth, with the name of Emanuele Conegliano, he adopted a new name when his family converted to Roman Catholicism. Da Ponte was ordained a priest in 1773 and in the 1780s became the official poet to Emperor Joseph II’s court. He wrote successful librettos for numerous musicians at that time, especially W.A. Mozart. He emigrated to the United States, where he spent the rest of his days promoting Italian cultural activities and was even a professor at Columbia College to teach Italian Literature and Language. Dive deeper into our collection!

Known for his magnum opus The Last of the Mohicans (1826), James Fenimore Cooper is described as America’s first major crusading novelist. He invented two genres of fiction, the Western and the Spy Novel; he is also considered to be a Romantic Novelist due to his focus on Native American life (17th-19th centuries), the Revolutionary War, and the American frontier.  He lived in New York City in the 1820s. Throughout his writing career, he dedicated himself to nurturing an America original culture, art, and history. Dive deeper into our collection! 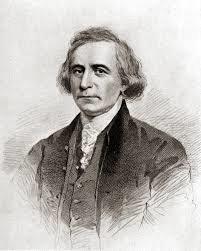 Distinguished for his anti-British and American patriotic writings including The British Prison Ship (1781), about a six-week imprisonment on a British prison ship (a traumatizing event that nearly killed him), he became known as the Poet of the American Revolution. He was also a close friend of James Madison (Founding Father and 4th President of the United States) which later contributed to his involvement with the National Gazette as an editor. Despite the social and political turmoil which he led actively, he is known for his lyrical nature poetry, which also made him America’s First Romantic Poet. Dive deeper into our collection!

A well-known and respected scholar, typical for an educated man of his period, Moore is best known for being credited as the author of the Christmas poem “A Visit from St. Nicholas,” first anonymously published in 1823; it later became known as Twas the Night Before Christmas. He was also a professor of Greek and Oriental literature at the General Theological Seminary (1821-1850) in New York City. In addition, he became a Library Trustee in 1811. Dive deeper into our collection! 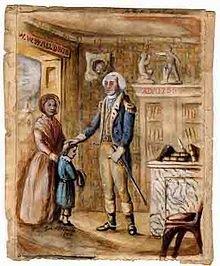 Best known for his stories Rip Van Winkle (1819) and The Legend of Sleepy Hollow (1820) (both stories appeared in his collection The Sketch Book of Geoffrey Crayon, Gent), he is considered to be Father of the American Short Story. There is a story that at the age of six, he met his namesake, George Washington (THE George Washington, 1st President of the United States), which impacted him greatly as a writer, biographer, and historian. The alleged event was immortalized by painter George Bernard Butler Jr. in 1854 - his painting is at right. Dive deeper into our collection!

Emerson used our space for two runs to promote Transcendentalism in March 1842 and February 1843. He delivered an early version of his essay ‘The Poet’ (officially published in 1844) in his 1842 lecture, or at least in the beginning of March, receiving awe-inspiring praise, including from a writer who is coming up on our list. In some way, Emerson was a man, thinker, and writer beyond his time, due to his seriousness and spiritually inclined writings on nature and various vast histories and cultures including of the Middle East. Dive deeper into our collection! 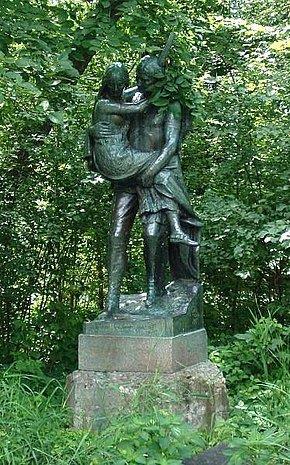 A renowned educator and a professor at Harvard College, Longfellow is best known for his poem “Paul Revere’s Ride” (1860), but wrote other epic poems including “Evangeline” (1847) and “The Song of Hiawatha” (1855) featuring historical and folkloric content with lyrical properties that evoke Latin, Ancient Greek, and even Norse prose. He was the first American to translate Dante Alighieri’s The Divine Comedy and a member of the Fireside Poets – the first school of American poets. The Library’s 19th-century guest-book records include his name as a visitor. (At right: a statue by Jacob Fjelde of Hiawatha and Minnehaha, in Minnesota.) Dive deeper into our collection!

Poe lectured at least three times at our Library – January and April in 1845 for a course called “Poets and Poetry of America,” and then on February 3, 1848 for ”The Cosmogony of the Universe” – a topic that was considered odd. The 1848 lecture may have been a possible inspiration for his poem “Eureka,” which was published roughly six months afterwards. There is a great 2002 New York Times article on his fascination with cosmology. Dive deeper into our collection!

Known for his panoramic representation of British society in Vanity Fair (published in a monthly installment from 1884–1848, in book form in 1848), he is second only to Charles Dickens as a mainstream Victorian novelist. They were in the same literary circles but very much rivals. Nevertheless, both of them visited New York City and signed the Library’s guest book. Dive deeper into our collection!

Considered to be the most widely known and read English author, Charles Dickens toured frequently. He spent a month in New York City where he gave lectures including on the question of international copyright laws and literary piracy, and signed the Library’s guest book. Very much a theatrical soul, he loved to be onstage reading his work and performing. Dive deeper into our collection! 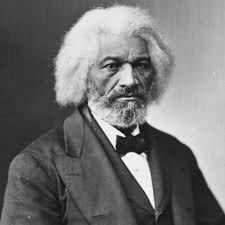 The Library has some history as a hub for conscious action and discussion. 1850 was a considerable example:  the Protestant and Whig American Anti-Slavery Society met at the neighboring Broadway Tabernacle on May 7 and at the Library’s auditorium on May 8. Library members Herman Melville and Horace Greeley (founder of the New York Tribune) were said to have been present. Both events were packed with a mob led by “Captain” Isiah Rynders, who heckled speeches of prominent abolitionists William Lloyd Garrison and Frederick Douglass and demanded the podium be given to Professor Grant – a racist and pseudoscientist. His vicious harassment caused the Anti-Slavery Society to conclude the meeting in the Library’s private conversations rooms. According to this narrative, while “The Captain” would holler and encourage abuses, Douglass would retort with the wit and composure he was known for. Dive deeper into our collection!

According to renowned American literature scholar Roy Harvey Pearce in his 1962 collection of critical essays on Walt Whitman, Ezra Pound called Whitman “America’s Poet…He Is America.” According to his biographer Jerome Loving, “Whitman...heard Emerson deliver an early version of ‘The Poet’ in the Society Library in Manhattan during the first week of March” 1842. Dive deeper into our collection!

Alcott lived in the Greenwich Village building that’s now home to NYU’s Law School between 1867 and 1870. due to the generosity of her uncle. She wrote the final paragraph of Little Women at the residence in 1868. Dive deeper into our collection! 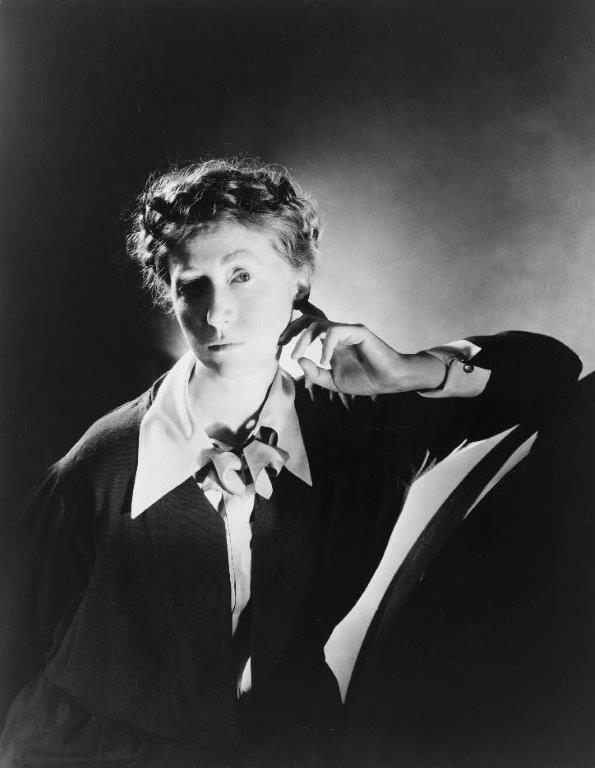 After living in Missouri and New Jersey, Moore moved to Greenwich Village. She was the editor of the influential literary magazine Dial (1925–1929) and from her college years was involved with the women’s suffrage movement both directly and through writings under a pseudonym. She has notable awards including the Pulitzer Prize and National Book Award to her name. Dive deeper into our collection!

Millay lived in Greenwich Village lived on Bedford Street, the narrowest NYC street. She founded the Cherry Lane Theatre with theater artists Evelyn Vaughn, William Rainey, and Reginald Travers in 1923. Her biographer Nancy Milford considered her to be “the herald of the New Woman” due to her descriptions of all female expression and experiences. Dive deeper into our collection!

Known for his keen perception of the American middle class, Cheever’s stories oftentimes contain the duality of human nature in dramatizing the ordinary and his attention to detail. His 1979 collection of short stories, The Stories of John Cheever, won the 1979 Pulitzer Prize for Fiction, which helped him become known as the “Chekhov of the Suburbs.” He had a sardonic view on life, but his writing earned him awards including the National Medal for Literature from the American Academy Arts and Letters (1982) and having his work included in the Library of America. Dive deeper into our collection! 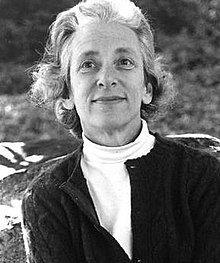 - shown at right
Member and Trustee

One of the leading American historians in the second half of the 20th century, Tuchman is best known for being the Pulitzer Prize-winning author of The Guns of August (1963) and Stilwell and the American Experience in China, 1911-45 (1972) for vivid and descriptive accounts and experiences of their time periods. A Radcliffe graduate, she was a research assistant for the Institute of Pacific Relations (1933-1935) and then a correspondent and writer for The Nation (1935-1939). She became a Library Trustee in 1982. Dive deeper into our collection!

A significant book artist of the 20th century, Sendak focused on mixing the fantastic and the human psyche together with illustrations and stories, including his most known work Where the Wild Things Are (1963), the controversial In the Night Kitchen (1970), and more than a dozen other picture books. Author Neil Gaiman describes Sendak as “unique, grumpy, brilliant, wise, magical and [he] made the world better by creating art in it.” Dive deeper into our collection! 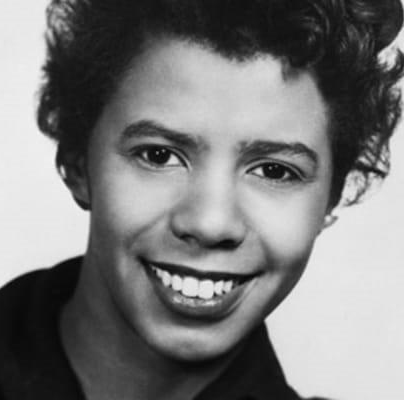 Hansberry is best known for her play A Raisin in the Sun (1959) – a play that highlights the lives of African Americans living under racial segregation in Chicago. However, she lived on New York City’s Waverly Place, and the title of the play was taken from Langston Hughes’ poem “Harlem” (1951): What happens to a dream deferred? Does it dry up like a raisin in the sun? Not only was she the first African American female writer to have a play performed on Broadway, the legendary singer Nina Simone crafted “To Be Young, Gifted, and Black” in her honor. Dive deeper into our collection!

Along with his attire - he dubbed it as “Neo-pretentious” in a 2018 New York Times article -  Wolfe was known for his sharp wit and innovative prose approach, which helped create the New Journalism movement. He was a Library member from 2001 until his death in 2018. We have a fantastic letter to Library staff, friends, and trustees, 2003, on the importance of books and libraries. Dive deeper into our collection!

Hope you have a great journey with us! If you’re curious about New York City and our own library’s history, we recommend our history The New York Society Library: 250 Years, edited by Henry S.F. Cooper Jr. and Jenny Lawrence. 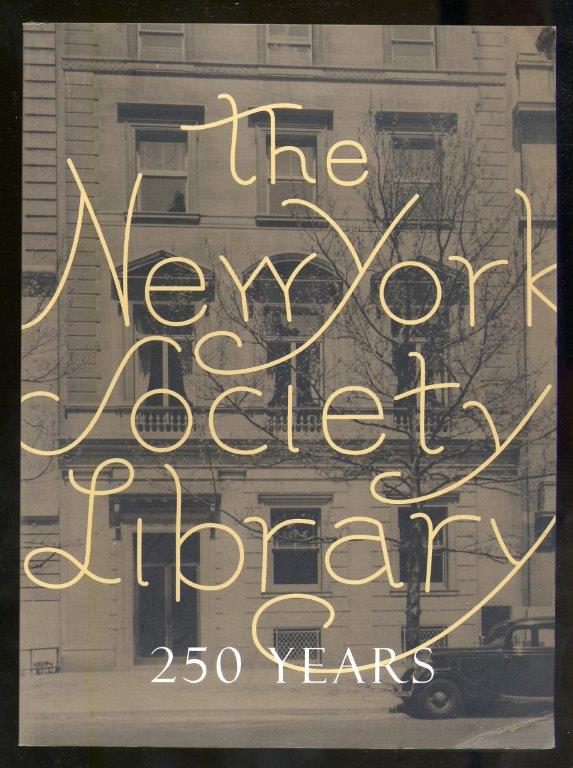