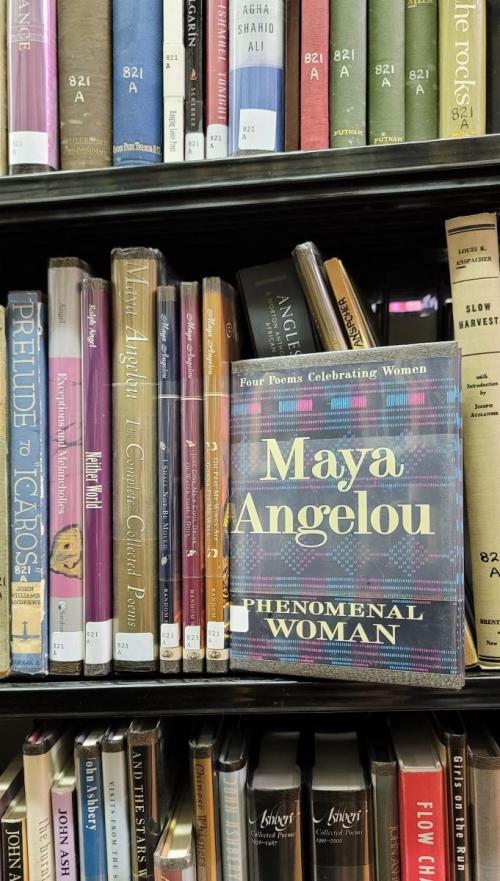 At the intersection of this year's Women's History Month (March) and National Poetry Month (April), we asked readers about their favorite woman poet. A wonderful assortment of older and newer voices across styles came in. Here are a few.

Three respondents listed Mary Oliver (1935-2019) as a favorite poet, and, no surprise, the Library has 19 books by and about her. If you know only one of her poems, we're betting it's "The Summer Day," with the question of "Tell me, what is it you plan to do with your one wild and precious life?" Dive right into other samples of her work on the Poetry Foundation site. 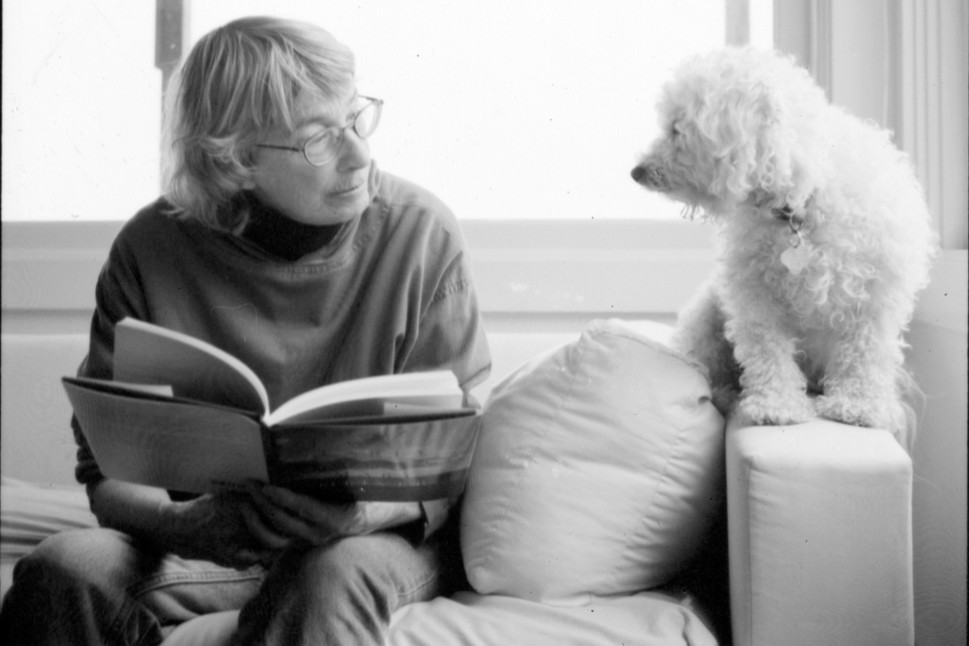 Two readers named the ever-popular Edna St. Vincent Millay (1892-1950), with one person mentioning specifically the sonnet "Only Until This Cigarette Is Ended," shown here. We have many collections by her or including her work - among them a recording of her own reading, plus plays and letters in addition to poetry. There are even more books that include her as a subject. 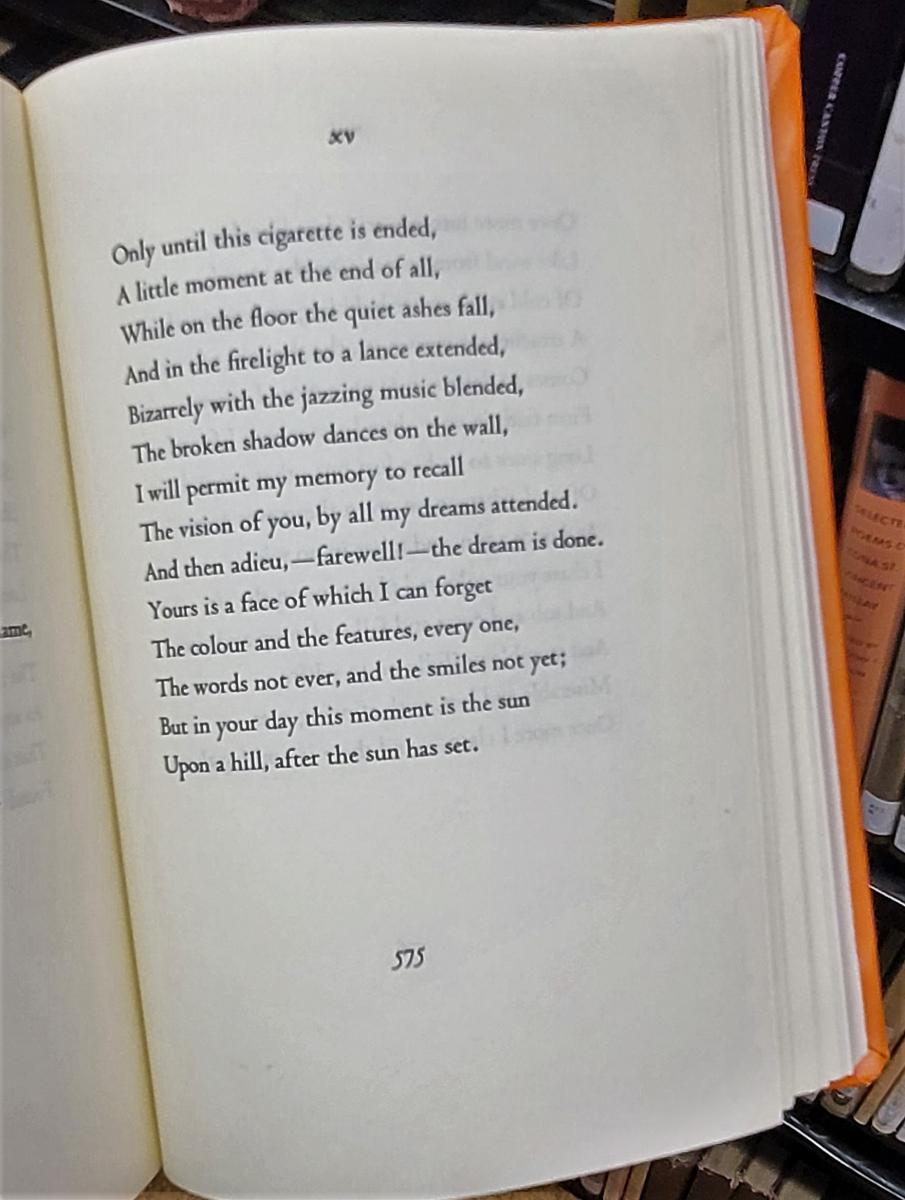 Founding texts of the Western literary tradition, the surviving works of Sappho (c. 630-c. 570 BCE) loom large in our collection, with a number of books including from the Loeb Classical Library. Library members can also dig into Loeb in electronic form. Several other books treat her life and legacy, including two novels and a play in verse.

I admit, this was the first I'd heard of La Comtesse de Die (or Comtessa de Dia) (fl. c. 1175), but she's included in this bilingual anthology French Feminist Poems from the Middle Ages to the Present. If she's new to you too, there's a very brief introduction here on AllPoetry.com.

A few centuries later we find Louise Labé (c. 1524-1566), for whom we hold a complete volume of poetry and prose in a bilingual edition and a volume of Love Sonnets & Elegies, and a century after her Sor Juana Inés de la Cruz (1648-1695). Our collections offer two volumes of her own work but also some handsome mentions of her in Juliet Menéndez's Latinitas: Celebrating 40 Big Dreamers and Herstory: Women Who Changed the World, edited by Ruth Ashby and Deborah Gore Ohrn.

Of course Emily Dickinson (1830-1886) made the list - the mother of American poetry, as poet Galway Kinnell called her in a 2004 Library event. We have a whopping 45 books of or containing her work, plus dozens of biographical and critical works, even unto a concordance (in our rare stacks), children's books, several fiction works such as Quieter Than Sleep by Joanne Dobson and a story by Joyce Carol Oates, plus of course William Luce's famous play The Belle of Amherst. We even have not one, but two books about Dickinson's gardening!

I was struck by the inclusion of Anne Morrow Lindbergh (1906-2001), since I thought of her as a prose writer, but indeed you can read both her prose and poetry here - for poetry, this volume in particular.

The towering legacy of Elizabeth Bishop (1911-1979) carries on in many hearts. Start here for volumes by her or including her poems. There's also a sound recording of her reading her own work and many books about her - of particular note, Thomas Trevisano's 2019 biography, on which he delivered our Lyn Chase Poetry lecture in 2020 - stream the recording here.

Drawing ever closer to the present, for Maya Angelou (1928-2014) we have, of course, twenty books of her poetry or including it - as well as her famous and moving autobiographical works like I Know Why the Caged Bird Sings.

Books by Eavan Boland (1955-2020) include a number of her works of poetry and a biographical work celebrating women poets!

The first living poet to be mentioned was Kay Ryan (b. 1945). Our shelves hold six volumes of her work so far, including most recently Synthesizing Gravity, which is not poetry but selected prose. Marie Howe (b. 1950) is represented with Magdalene, The Kingdom of Ordinary Time, and What the Living Do, and Jane Hirshfield (b. 1953) turns up with her own volumes and a book about how great poems transform the world. 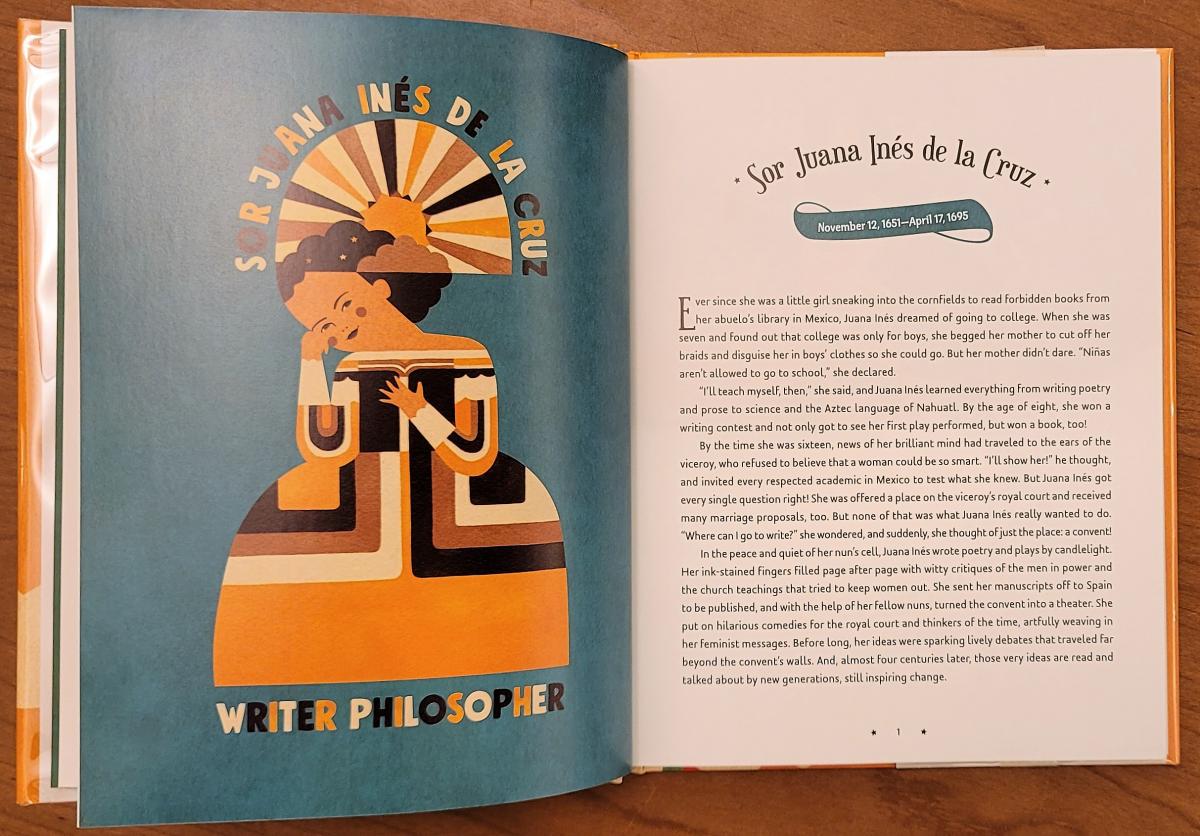 Elizabeth Acevedo is best-known and popular here for the NYC Book Award-winning 2018 novel in verse The Poet X. We have it as a print book, as an e-book, and as an audiobook - for those who feel that poetry is always best experienced aloud. Acevedo's work is also included in this remarkable compilation by another rising poet, Mahogany L. Browne.

We must confess that we don't have any published books - YET - by Morgan Boyle - but we can brag that she served as a Library staff member from 2017 to 2019! Get a flavor of her work here in YES magazine, where she was the August 2021 poet of the month.