Colors of the World 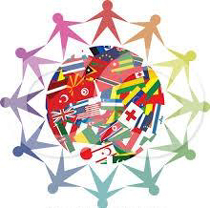 School had just ended, and the familiar buzz of kids leaving rang in my ears. But I couldn’t get that one sentence to stop messing with my brain. The events that had unfolded earlier that day were on repeat in my head. I had no idea what to make of the phrase; there is only so much a first grader knows about the cruelty of the real world.

My class had been on our way to the school’s worn-out gym. After spending all in a morning in a classroom with the sun beating down on us, we were very happy to be going inside. My friends and I marched down the hallway with our infamous spray fans. They were our saviors as our teacher droned on in rooms with no air conditioning.

As the narrow hallway turned into a slightly wider one, my friends and I talked about nothing in particular. None of us felt like going into a deep conversation, as the heat was getting to us, and we were all on the edge.

“Hey, can I use one of your fans for a second?” The boy who asked had extremely pale white skin, he had shorts and a t-shirt on and was soaked in sweat, like the rest of us.

All my friends backed away as I glared at them, obviously not happy with the irritating task of lending my fan to the boy. I was in no way ready to face the teacher if the boy told the teacher I wouldn’t share.

“Don’t worry, I won’t,” he started in a mimicking voice. “I know you girls use these as a water bottles.”

Being first graders, the competition between girls and boys was a never-ending cycle. My world was separated only by gender, but that was about to end.

“What, are you afraid of girls?” I replied, taking my shot to annoy him.

“Of course not.” The boy said like it was the most obvious thing on the planet.

“Then what?” I asked, exasperated; I wanted nothing more than to get my fan and go back to my friends. He started rapidly spraying himself with water as we neared the gym. I was so close to grabbing my spray fan and running. I stopped myself, not wanting to get in trouble. Then he said it, the one phrase I can never erase from my memory.

That was what threw me off. All I could think was what did he mean? I grabbed my fan and stormed off, not knowing how to react. I knew that he couldn’t have actually turned brown, but it was the way he said it. He said it as though “becoming brown” was the worst thing that could happen to him. As I processed what he said, I wondered if everyone saw people by the color of their skin. Maybe I was the only one who didn’t.

For the rest of the day, I could only see people by the color of their skin and I had no idea why. I suddenly felt very self-conscious because I was the only Indian in my class. I felt like an outsider. My world seemed upside down, and as the day progressed, the world became more separated: my friends were black or white, not my friends, my teacher was not my teacher, she was white.

All these questions raced into my mind. Why does it matter what color skin you have? Does the color of your skin make you, you? The list kept going, as my heart refused to believe that the world, which seemed perfect so little time ago, could be so corrupt and judgmental. But I knew in my mind that I had been protected, that I lived in a world where the color of my skin would not rule my life, but the knowledge that it could made me uneasy.

My class started warm-ups for gym. We played games, and I somehow got through the class without getting in trouble for not paying attention. The world seemed to move around me as I stayed frozen in time.

I woke up that day thinking that discovering the world was an exciting adventure, full of new experiences, and I went to sleep that night thinking that the world was a light and dark labyrinth where every time you turn, you encounter one or the other. I was broken out of my trance when school ended, but my thoughts kept going. I don’t remember much else from that day, but I do remember wondering why one of my friends was Chinese but had a white father or why my brother was so pale, even though he was part of an Indian family. When my mom got home that night, I told her about what had happened and asked her whether the color of my skin made me who I was.

“Of course not, and there is no reason for you to think that or to worry about it.” She replied, followed with a soft smile.

But I knew I did need to worry about it, that I would encounter other problems involving this idea. And I was right. Later in that year, we learned about segregation and Martin Luther King Jr. Of course, we learned that segregation in the U.S. had ended, but I wondered whether that meant all inequality was gone. I soon found out that this was not true; this made me realize there really is no way to predict whether racism will play a part in my life.