The Library has long considered its biography collection one of the strengths of the stacks. Over 30,000 biographies are in the building, most in stack 7 where near-full shelves groan under the lives of the heroic, the villainous, the famous, the forgotten, and the obscure. In this edition of Book Recommendations, Library staff highlights some of our favorite biographies from the stacks with hopes that you find something to read and enjoy among our selections. Also see Writing My Life, a previous post devoted to memoirs and autobiography. 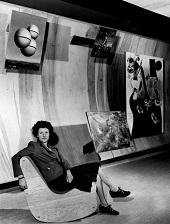 You do not need to share the subject's passion for art to enjoy Anton Gill's biography of modern art patron, Peggy Guggenheim. Peggy's life spanned the better part of the twentieth century and Gill's meticulously researched account is a look at not only the woman but the extraordinary times in which she lived. Although from a "poor" branch of the Guggenheim family, Peggy inherited a small fortune after her father went down with the Titanic. Her money and name were enough to earn her a place among the bohemian ex-pat set in Europe and sustained her as she traveled, married, divorced and famously engaged in numerous love affairs. She began collecting art in the 1930s eventually championing the modern and abstract art movements by supporting young artists (most famously Jackson Pollack), and amassing an impressive and eclectic art collection of her own. The story of Peggy’s life includes a distinguished cast of supporting players including, Samuel Beckett, Max Ernst, Wassily Kandinsky, Yves Tanguy , Djuana Barnes, Ernest Hemingway and many other artists, writers and intellectuals with whom she associated. Gill recounts Peggy’s extraordinary life in astounding detail making for a titillating and engrossing read. —Meredith Rossi, Head of Circulation

Banksy: The Man Behind the Wall | Will Ellsworth-Jones

Banksy may be the most well-known street artist working today. He goes out of his way to disguise his voice in interviews (the few that he agrees to), hide his face, and otherwise avoid detection, and once remarked that “invisibility is a superpower.” Ellsworth-Jones doesn’t attempt to unmask Banksy in this intriguing biography but instead shines a light on an artist and social critic who is incongruently both an outsider and a highly commercial art world phenomenon. —Carolyn Waters, Assistant Head Librarian

It is true that it might be difficult for anyone to write a boring biography of Richard Burton—fearless explorer, prolific author, Victorian agitator, linguist, and translator of extraordinary skill. But Fawn Brodie goes above-and-beyond, scrutinizing her subject with insights and tireless curiosity that Burton himself would have admired, placing this biography in the “must-read” category. Brodie trails Burton around the globe: from his native England to India, where he served as a Captain in the East India Company; to Africa, where he searched for the source of the Nile; to Mecca, which he famously and dangerously visited in disguise; and Salt Lake City, where Burton trekked to meet Brigham Young in 1860. In the midst of all of this, Burton learned 29 languages, fought duels, translated (and annotated) an unexpurgated Book of the Thousand Nights and a Night (The Arabian Nights) and the The Kama Sutra, and wrote several books. Burton’s outspoken criticism of British political policies and his predilection for the erotic and exotic repeatedly offended the Victorian sensibilities of his countrymen as well as his devout Catholic wife, Isabel. Brodie may occasionally overreach in attempts to posthumously psychoanalyze her subject, but this never detracts from a fascinating read.

Straying far from the lines of traditional biography, Edward Dahlberg’s Because I Was Flesh is also highly recommended. In the course of this uncategorizable book, Dahlberg presents a biography of his mother, a widowed “Lady Barber” in rough early 20th century Kansas City. Dahlberg’s portrait is heartbreaking and complex, delivered in dense, allusive prose. One does not easily forget Lizzie Dahlberg. —Steven McGuirl, Head of Acquisitions 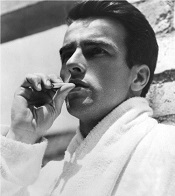 Neither of Montgomery Clift’s peers, Dean or Brando, could hold a flame to the sad, stormy dénouement—called “the slowest suicide in show business”—of his life. It was cut short at 45, but also in half by the 1956 automobile accident that left the right side of his impossibly beautiful face paralyzed. Patricia Bosworth’s compassionate and riveting Montgomery Clift: A Biography benefits from her respect and understanding of acting as craft, as well as intimate access to Clift’s inner circle, all profoundly affected by his fragility and conviction. Revelations of his isolated, almost Wharton-esque childhood—reared by a secretive mother, an unacknowledged illegitimate of aristocratic birth intent on her children achieving their “thoroughbred” potential—collide with the image of Elizabeth Taylor climbing into Clift’s wrecked automobile to remove the dislodged teeth from his sputtering throat. A high watermark for the entertainment biography.

Bonus picks: David Stenn’s Bombshell: The Life and Death of Jean Harlow and Clara Bow: Runnin' Wild offer beautiful and moving tributes to two singular screen presences, defining them as they truly were and not as either the carefree sensual facades or the wild gossip would have you believe. —Brynn White, Bibliographic Assistant/Digital Projects Assistant

Laura Hillenbrand's Unbroken deserves its hype. The saga of Louis Zamperini—juvenile delinquent, Olympic runner, World War II bombardier, shark attack survivor, prisoner-of-war camp survivor, survivor, survivor—sounds like three or four Hollywood genre pictures even in outline, and Hillenbrand's smooth, propulsive writing makes the book impossible to put down without loading on the melodrama. The account of Zamperini healing his trauma with the help of Billy Graham is especially sensitively handled and no less interesting than the war stories.

Unbroken was so good that I had to pick up Hillenbrand's earlier biography, even though it's of a horse—and Seabiscuit didn't let me down. Though I learned plenty about horse racing, the author understandably uses the immortal Biscuit's tale as an excuse for an earthy, tangible portrait of Depression-era America and for the independently compelling stories of owners Charles and Marcela Howard, trainer Tom Smith, and irrepressible jockeys Red Pollard and George "Iceman" Woolf. —Sara Holliday, Events Coordinator

The Pilot and the Little Prince | Peter Sis

Antoine de Saint-Exupéry was born in France in 1900 when airplanes were just being invented. Antoine dreamed of flying and grew up to be a pilot—and that was when his adventures began. He was one of the first pilots to deliver mail by plane and helped create new routes to faraway places. From his plane he reflected on life on earth and in the skies, which inspired him to write about his experiences. Peter Sís’s exquisite illustrated biography celebrates the author of The Little Prince, one of the most beloved children’s books of all time. —Carrie Silberman, Head of Children’s Library 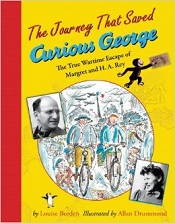 Brimming with original documents and photographs, this delightful picture book biography reveals how the infamous monkey Curious George made a narrow escape from France, just as the Nazis were marching into the country during the summer of 1940. George’s German-Jewish creators Hans Reyersbach and Margarete Waldstein had already experienced a globe-trotting life leading up to their flight from war-torn Europe. Their journeys took them to South America and ultimately New York, where in 1941, their original tale, entitled The Adventures of Fifi, was transformed into the stories about Curious George that continue to be adored by children. Check out this enlightening biography for some of George’s biggest fans, who may be curious themselves to read about the escapades the Reys had in their quest to find a safe haven where they could share their stories. The modern illustrations that expand upon the exciting tale perfectly evoke the familiar spirit of the mischievous monkey and his brave authors. —Susan Vincent Molinaro, Children’s Librarian and Interlibrary Loan Librarian