Anyone paying attention to publishing in the last few years can confirm that a lot of the best fiction writing is being marketed for a Young Adult audience. In a handy parallel, the Library's YA holdings are getting special love from Children's & Young Adult Librarian Susan Vincent Molinaro and her colleagues in the Children's Library. Young Adult fiction can be found in Stack 9, plus middle-school books in the Whitridge Room and a sampling of hot new titles in the lobby. As many Library staffers know, there's no shame in loving Young Adult books, even if your teen years are far behind you. Here are a few of our recent favorites. Have a recommendation or purchase suggestion? Send it along to the YA-fiction devotee at events@nysoclib.org. 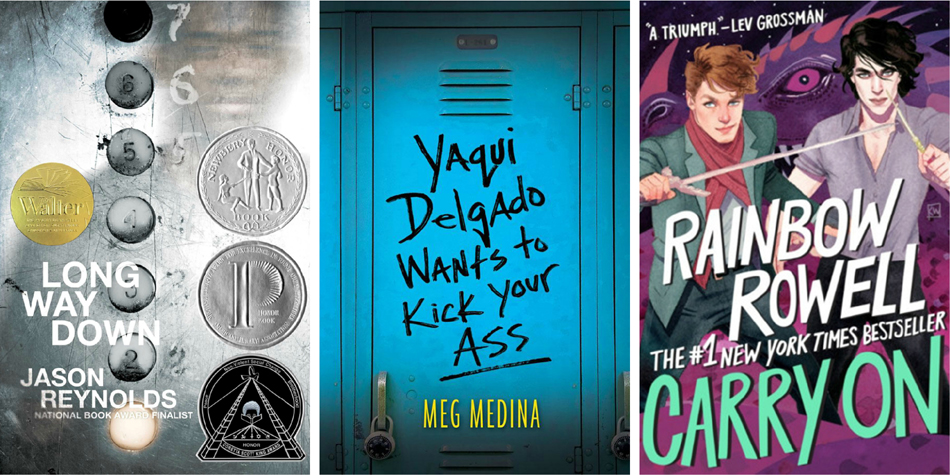 Susin Nielsen | Optimists Die First
Books featuring teens confronting mental health issues have become quite the hot topic. Understandably heavy, they are good bridges to adult novels. As the title and cover suggest, Susin Nielsen’s Optimists Die First has a dark side, but it’s one laced with plenty of humor and hope. Petula and Jacob are two teens whose lives intersect when they’re assigned to attend art therapy classes (YART). We learn that Petula is recovering from a devastating loss while Jacob’s particular reasons for showing up at YART emerge more slowly. A former writer for the Degrassi television series, Nielsen’s writing is sharp and witty, and in contrast to the bulk of YA “issues” novels out there, this one doesn’t suffer from an overabundance of melodrama and teen angst. It was such a refreshing read that I found myself wanting to start it over again as soon as it ended!
—Susan Vincent Molinaro, Children’s & Young Adult Librarian

Meg Medina | Yaqui Delgado Wants to Kick Your Ass
Changing schools is always an awkward fresh start; however, Piddy Sanchez’s new school seems to have become a battleground between her and the school bully, Yaqui Delgado. The author explores ways in which bullies and cliques operate and tells of one girl’s struggle to change her situation without changing herself in the process. A fast-paced and moving book, Yaqui Delgado won the Pura Belpré Award in 2014.
—Ashley-Luisa Santangelo, Bibliographic Assistant

Mackenzi Lee | The Gentleman’s Guide to Vice and Virtue
Hang on to your tricorner for this wild trip through delicious ancien-regime Europe. Hilariously self-obsessed young aristocrat Monty Montague is supposed to use his Grand Tour to get over his dissolute habits—but that goes to rake hell when he discovers that he’s desperately in love with his (male) best friend—and that his wallflower little sister Felicity is actually a brilliant scholar and aspiring physician. The trio rocket across the Continent from palaces to highwaymen to traveling fairs to pirates, and finally to a dangerous encounter with a furious duke and a mysterious family of alchemists. Felicity’s companion volume, The Lady’s Guide to Petticoats and Piracy, is due out soon.
—Sara Holliday, Head of Events

Angie Thomas | The Hate U Give
Starr Carter’s world ended with a bang and a whimper, and now she’s doing her best to navigate within her new understanding of this country and how she fits in it. Readers looking for something real, gritty, beautiful, and powerful will find exactly that within the pages of this novel that follows a teenager as she struggles to heal from disaster and find her place in both her home in the projects and her posh private school, with the help of her supportive family and resilient community.
—Danielle Gregori, former Children’s Librarian

Jason Reynolds | Long Way Down
After Will, a 15 year old boy living in the inner city, sees his older brother Shawn shot and killed on the street, he knows what he must do. There are three established rules in his neighborhood: no crying, no snitching, and revenge. Will finds his brother’s gun (though he has never held one before), tucks it into his waistband, and enters his building’s elevator intent on following rule #3. On the way down, the doors open on each floor, allowing the ghosts of Will’s past to board, each ghost a victim of gun violence. Reynolds tells the story through expressive free verse poems, a current trend in young adult literature (for further reading check out Kwame Alexander, Jacqueline Woodson, and Ann E. Burg). A powerful and relevant story for the modern age, Long Way Down is certainly a book not to be overlooked. It received honors in the 2018 Newbery, Printz, and Coretta Scott King Youth Media Awards.
—Morgan Boyle, Children’s Assistant

Rainbow Rowell | Carry On: The Rise and Fall of Simon Snow and Fangirl
Simon Snow is having a terrible final year at the Watford School for Magicks. Supposedly he’s the chosen one, predetermined to defeat a monster bent on removing magic from the world, but he can’t even do the most basic spells. And then there’s Baz, Simon’s nemesis, who is quite possibly a vampire, but is most certainly missing. Though Carry On pays homage to the Harry Potter novels, Rainbow Rowell uses the setting to tell her own kind of story, concerned mostly with her characters' emotional lives. It’s a great read-alike for Potterheads. Carry On grew out of Fangirl, another of Rowell’s novels, about twin sisters moving to college and moving on with their lives following the death of their mother. Simon Snow is the Harry Potter of their childhood and the twins’ obsession, and Carry On is Rowell’s riff on the characters she created that the twins loved and grew up with. Read both!
—Patrick Rayner, Acquisitions Assistant

Philip Pullman | La Belle Sauvage
Master storyteller Philip Pullman returns to the universe he built in his acclaimed fantasy trilogy His Dark Materials. As with the earlier series, the new book (the first in another planned trilogy) has as much appeal for adults as teens. Our hero is the inquisitive, observant, loyal, intelligent, and courageous eleven-year-old Malcolm. Malcolm’s curiosity brings him into the realm of a scholarly group working in secret to fight the forces of the powerful and imposing religious Magisterium. With his prized canoe - La Belle Sauvage - and a surprising and essential ally in Alice, Malcolm ventures from his comfortable home to escape a flood of epic proportions. While navigating the raging river and numerous terrifying encounters, Malcolm must ferry his precious cargo - the baby named Lyra Bellacqua - to safety and sanctuary away from the reach of malicious Magisterium officials. Those familiar with The Golden Compass and other books in the earlier series will delight to find out the background story on how Lyra began her adventurous life. Whether or not you’ve read the earlier series, La Belle Sauvage stands alone as a gripping and thought-provoking adventure. This book is available both in print and electronic forms.
—Randi Levy, Head of the Children’s Library