Home > Our Collection > The World Cup is Coming! Books on Soccer to Get You in the Spirit

The World Cup is Coming! Books on Soccer to Get You in the Spirit

The world’s largest sporting extravaganza, the World Cup, is taking place in Qatar from November 21 – December 18. What better way to pass the time between matches than by reading about the beautiful game? Fans and Staff members James Addona, Randi Levy, and Carolyn Waters have provided a few worthy recommendations.

AND: Join us in the Members’ Room on Monday, November 21 at 2pm to watch the United States Men’s National Team play their first 2023 World Cup match against Wales. There will be snacks and beverages! Open to members and their guests.

Soccer in Sun and Shadow by Eduardo Galeano; translated by Mark Fried 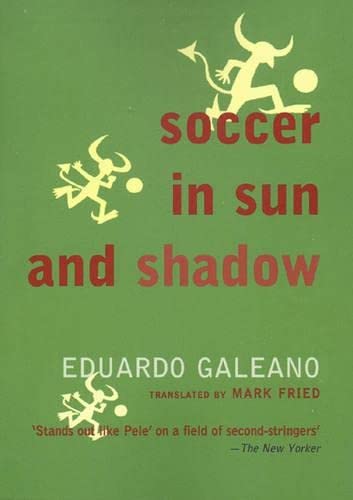 Possibly my favorite book about the beautiful game. Galeano was a Uruguayan journalist who wrote about many subjects, but so passionately about soccer that in one obituary he was referred to as “global soccer’s pre-eminent man of letters.” Galeano’s essays are poetic and lyrical, reflecting on the beauty and pathos in soccer, and its global allure. In one masterful essay about the referee, universally hated, he renders a portrait of “the abominable tyrant who runs his dictatorship without opposition...card in hand he raises the colors of doom: yellow to punish the sinner and oblige him to repent, and red to force him into exile."

The Miracle of Castel di Sangro by Joe McGinniss
Fans of the underdog will love McGinniss’s improbable tale of the Castel di Sangro team from the Abruzzi region, which progresses from Italy’s lowest division to Serie B. Subtitled A Tale of Passion and Folly in the Heart of Italy, the reader can’t help but be swept along with this team as they run out this one magical season.

Outcasts United: A Refugee Soccer Team, An American Town by Warren St. John
Soccer may be at the center of this book, but its heart truly is a feisty Jordanian immigrant and the Fugees, a group of refugee boys from many nations, whom she coaches in the town of Clarkston, Georgia. In this “small town with a big heart,” as its motto goes, the resentments of residents and the dislocation of its newcomers challenge the community but provide a heartwarming story of hope and resiliency.

The Ball Is Round: A Global History of Soccer by David Goldblatt.
This is the talismanic, do-it-all midfielder of soccer books: it covers the pitch with verve and creativity, does the dirty work, and finds a way to account for the rogues, ne’er do wells, and underappreciated figures in the game. The result is an essential, entertaining account of how soccer became the world’s most popular sport.

Net Gains: Inside the Beautiful Game’s Analytics Revolution by Ryan O’Hanlon
Few things are as constant in soccer as the tension between playing an open, aesthetically oriented game and playing a closed, defensive one. Put another way, in any given match, season, or tournament, you play witness to variations on the eternal struggle between futebol d’arte and futebol de resultados. O’Hanlon’s book takes a deep dive into how methods of measurement and statistical analysis shape how countries, clubs, managers, and players try to answer the question: is there a “right” way to play?

Eight World Cups: My Journey Through the Beauty and Dark Side of Soccer by George Vecsey 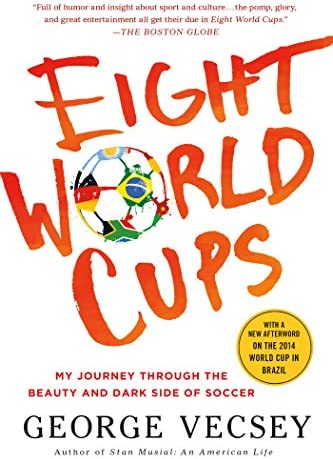 A personal, highly engaging read from a veteran New York Times columnist. Vecsey’s eight World Cups begin with Spain 1982 and end with South Africa 2010, and recount the many highs and lows in between, from Argentine Diego Maradona’s “hand of God” in the 1986 World Cup quarter final (his explanation for a goal that should have been disallowed), the 1994 World Cup in the United States, fan culture, and the corruption at the heart of FIFA, world soccer’s governing body.

The Girls of Summer: The U.S. Women’s Soccer Team and How it Changed the World by Jere Longman
In this book from 2000, New York Times reporter Jere Longman tells the story of the U.S. Women’s National Soccer Team that beat China in a heroic nail-biter during the 1999 World Cup at the Rose Bowl in Pasadena. The story is well worth reading, as it ushered in the era of U.S. Women’s dominance in world soccer. The United States Women’s National Team is still ranked first in the world and will be strong contenders to win the next Women’s World Cup in Australia and New Zealand in 2023.

The ESPN World Cup Companion: Everything You Need to Know About the Planet's Biggest Sports Event by David Hirshey and Roger Bennett.
Bonus recommendation: the book is a lovely and useful guide, but listening to Bennett's podcast Men in Blazers is often the most fun you’ll have the day after a World Cup match (win, lose, or draw).

Among the Thugs by Bill Buford 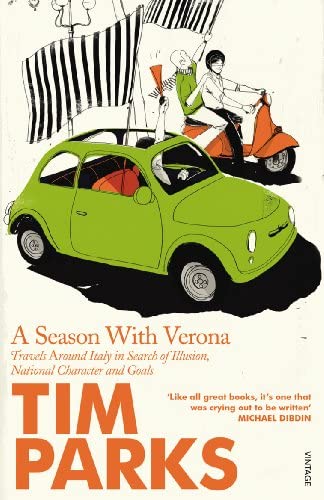 If you have a morbid fascination for the demented devotion of fans, then this is the book to pick up. In the 1980s, Buford spent years following a “firm” of diehard supporters of Manchester United as they brawled and rioted, wreaking havoc and terrorizing opposing fans in England and across the Continent. The soccer is almost beside the point. Buford presents this terrifying portrait of a subculture, noting that in the absence of a future, “youth will use violence to wake itself up.”

A Season with Verona: Travels around Italy in Search of Illusion, National Character and –Goals! By Tim Parks
Parks spends the year 2000 traveling with his adopted home team, Hellas Verona, of the Italian top league Serie A. It’s a travelogue, a commentary on the state of Italy, and an exploration of fandom, including the thugs.

Fever Pitch by Nick Hornby.
Who can resist Nick Hornby’s funny, unhealthy obsession with his beloved Arsenal? Obligatory note: there are two film adaptations of Fever Pitch, one starring Colin Firth and one starring Jimmy Fallon. The latter changes the sport to baseball and the team to the Red Sox - while any fan of any sport can see themselves in Hornby's joy and heartache, please try not to hold these baffling choices against the book.

How Steeple Sinderby Wanderers Won the FA Cup by J.L. Carr [with a new introduction by D.J. Taylor] 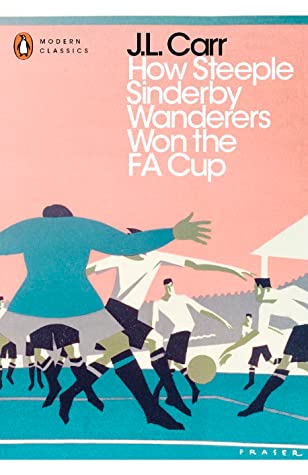 The Football Association Cup (or FA Cup for short) is the all-England soccer tournament in which teams from division 9 to the elite Premier League compete in knockout matches to reach the Final. In reality, very few Giant-killers have made it so far, but Carr gives the fictional Steeple Sinderby Wanderers that chance in a comic farce that’s a delight whether you’re a soccer lover or not.

The Damned Utd by David Peace
Peace’s Damned Utd is the fictionalized story of famed soccer star and manager Brian Clough and the 44 days in 1974 that he coached Leeds United, a team he had previously criticized as corrupt and dirty. The book was also made into a movie featuring Michael Sheen as Brian Clough. (Leeds United, a team worth watching, is now coached by another charismatic coach, the American Jesse Marsch.)

While I cannot claim the soccer-fan cred of my fellow recommenders here, I know a good book when I read it! Here are three terrific soccer and soccer-adjacent titles from the Children’s Library collection. Randi Levy, Head of the Children's Library

The Floating Field: How a Group of Thai Boys Built their Own Soccer Field by Scott Riley: The true story of a group of determined and ingenious soccer enthusiasts building an unexpected place to play and practice.

All Thirteen: The Incredible Cave Rescue of the Thai Boys’ Soccer Team by Christina Soontornvat
The harrowing, heroic, and gripping story of the 2018 weekslong rescue operation to save a soccer team from a flooded cave in Thailand.

How Soccer Explains the World: An Unlikely Theory of Globalization by Franklin Foer

Futebol: The Brazilian Way of Life by Alex Bellos.

Home and Away: Writing the Beautiful Game by Karl Ove Knausgaard and Fredrik Ekelund; translated from the Norwegian by Don Bartlett and Seán Kinsella

A Vine in the Blood by Leighton Gage

The Lone Man by Bernardo Atxaga; translated from the Spanish by Margaret Jull Costa

Only a Game by J.M. Gregson.