Inspired by our newest book fund, The Byron & Elizabeth Dobell Fund for World Literature in Translation, in this installment of staff book recommendations we highlight literature from around the globe—memoirs, graphic novels, travel, fiction, and a few children’s books for the youngest citizens of the world. Click on the titles to check availability and call numbers and enjoy. Click here to read more about the Dobell Fund on page two in the summer 2015 issue of Books & People. 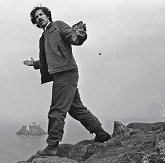 Of Walking in Ice: Munich-Paris, 23 November-14 December 1974 | Werner Herzog (translated from the German by Martje Herzog and Alan Greenberg)

Filmmaker Werner Herzog never intended to publish this diary of his journey on foot to metaphorically save the life of his dying mentor, the film critic Lotte Eisner. But I’m glad he did, as it is a bizarre, captivating little book, filled with Herzog’s typical existential dread and humor (one day asking, “why is walking so full of woe”, and the next declaring “everyone should walk”).

The Most Beautiful Book in the World: Eight Novellas | Eric-Emmanuel Schmitt (translated from the French by Alison Anderson)

I am a big fan of Europa Editions (think: Elena Ferrante’s Neapolitan novels) and one of its translated works that I find myself recommending often is this one by Eric-Emmanuel Schmitt. Ironically, the title novella is my least favorite, but who can resist the specter of the most beautiful book in the world? The novellas in this collection are mysterious, beguiling, utterly charming, and populated by enigmatic characters, each pursuing their own happiness with unexpected, often magical consequences. —Carolyn Waters, Head Librarian

“Wait!” cried the baron, plunging after her. “You are a terrifyingly negative and beautiful person!”

One could say this to any character in either Fatale or The Mad and the Bad, both by Jean-Patrick Manchette. The French Manchette wrote crime fiction in the wake of the May 1968 protests in Paris, blending noir with leftist political satire. (The New York Review thoughtfully commissioned Donald Nicholson-Smith, a former Situationist, to translate both books.) This distinguishes Manchette from American noirsters, but I find that he truly stands out for his complex character writing.  Fatale’s Aimee is a beautiful, calculating killer that sort-of befriends the town loony, Baron Jules, who she meets while he’s relieving himself all over the wallpaper at a swanky suburban cocktail party.  (“Hell’s bells! A Lady!” he says.)  In The Mad and the Bad, a sociopathic philanthropist-architect, Michel Hartog, is the only clearly evil character.  Everyone else—a killer, a brat, an insane governess, and a hermit— responds to a violent, chaotic world with a mixture of ambivalence, guilt, anger, and (of course) more violence.  Both books are short, pick them up for a weekend and hang on for the ride. —Erin Schreiner, Special Collections Librarian

That we have access to the stories and art of Bruno Schulz is a small miracle.  By all accounts, Schulz was shy and self-contained.  He rarely left Drohobycz, the Polish town where he was born, devoting his free time to writing and drawing.  Eventually he passed his stories along to a novelist who recognized the stories’ quality and saw to their publication in 1934.  Three years later, he published his second and final collection.  The first collection appeared in English in 1963 as The Street of Crocodiles. The second appeared in 1988 as Sanatorium under the Sign of the Hourglass.  Schulz, a Polish Jew, was gunned down by a German SS officer in 1942 at the age of 50, and these works, along with some correspondence, comprise everything extant from him.  But what a miracle they are—strange and dark and hallucinatory and beautiful.  He’s often compared to Kafka, for the slant of his imagination, and Proust, for the depth of his inner life, but that only hints at their mystery and magic.  If you like the illustrations he drew for Sanatorium, you can see more of his drawings here.  —Patrick Rayner, Acquisitions Assistant/Circulation Assistant

Underground in Berlin: A Young Woman’s Extraordinary Tale of Survival in the Heart of Nazi Germany | Marie Jalowicz Simon (translated from the German by Anthea Bell)

Underground in Berlin (first published in Britain in 2014 as Gone to Ground) is an absorbing non-fiction account of the years that Simon, a young middle-class Jewish woman, spent “hiding in plain sight” in Berlin during the Second World War.  With forged identity papers and a slender network of helpers that included German political dissenters, foreign workers, other Jews, and even Nazi loyalists, Simon managed to find sufficient food, money, and shelter to sustain her until the end of the war. Near the end of her life, Simon dictated her recollections of those years to her son, a historian, who transcribed and prepared them for publication, checking facts against archival sources when possible.  He and the translator provide occasional footnotes for clarification; otherwise, the story is entirely Simon’s own.  —Laura O’Keefe, Head of Cataloging & Special Collections

An alcoholic vagrant living on the banks of the Seine named Andreas is greeted by a mysterious stranger who hands him 200 francs so that he may deliver it to the shrine of St. Therese.  What happens to Andreas over the course of the next few days while on this mission is The Legend of the Holy Drinker. The beauty of this 50-page novella is difficult to

describe, but it reads like a modern fable and Roth’s direct (but not “simple”) prose quietly accumulates a shimmering quality as the story unfolds and Andreas’ life transforms. Exhausted by exile, poverty, and alcoholism, Joseph Roth (1894-1939) completed Holy Drinker during the final months of his life, and it provides a perfect closing to his body of work. It could only have been written by someone who lived a hard life but who was determined (to paraphrase Malcolm Lowry) that he die “on the right side of his despair.” A recent translation that has me intrigued is Disagreeable Tales by Leon Bloy (1846-1917), a French Catholic writer of severe disposition and vast imagination. The stories live up to their collective title and are best taken in manageable doses. Flannery O’Connor once called Bloy’s work an “iceberg hurled at me to break up my Titanic,” and his influence is apparent. Thanks to Wakefield Press for the recent handsome publication of this work, nicely translated by Erik Butler. —Steven McGuirl, Head of Acquisitions

I’ll Be Right There is a coming-of-age novel that takes place in 1980s South Korea. Set in the midst of political upheaval and “mysterious disappearances,” the author never explicitly reveals the exact time or place as it is story of grief and solace which has no boundaries.  Three friends are brought together by a common mentor, and each of them is dealing with substantial loss.  They find comfort in each other’s company and salvation through poetry and literature. Ultimately, the friends grow apart after enduring a number of tragedies.  Beautifully translated by Sora Kim-Russell, the introduction sets the emotional narrative of Sin’s second novel. —Kathleen Fox, Interlibrary Loan/Senior Circulation Page

Persepolis 1: The Story of a Childhood, a graphic memoir written and illustrated by Marjane Satrapi, tells the story of her childhood growing up as a Muslim in Iran during the Islamic Revolution.  This memoir paints a country often depicted as cold and isolated in a new light, showing the humanity and the warmth that comes from the strong bonds of family and friends.  The original comic was written in French, but has been translated into multiple languages.  There is a second part of Satrapi’s story, Persepolis 2: The Story of a Return.   This volume focuses on her education in France, as well as her eventual return to Tehran, and to the social oppression and religious tensions.  Satrapi skillfully depicts the pain that comes from loving your country while also seeing the corruption and violence sneaking into the new culture.  This is the perfect read for those who are interested in a narrative of the social changes in Iran, and those who battle with loyalty to a country that makes choices one does not agree with. —Danielle Gregori, Children's Librarian 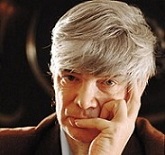 Moscow to the End of the Line | Venedikt Erofeev (translated from the Russian by H. William Tjalsma)

I first read Moscow to the End of the Line  as a college student in my Russian Literature course. Having already decided at the age of 19 that I preferred Dostoevsky over all others, I approached this Soviet-era social commentary without enthusiasm. Little did I know the main character’s drunken train journey would lead me to question the very meaning of my own existence.  While this book is wonderfully, tragically, funny, it’s worth a read for its shoe polish cocktails recipes alone. —Morgan Aronson, Bibliographic Assistant

My Happy Life and My Heart is Laughing  | Rose Lagercrantz; illustrated by Eva Eriksson (translated from the Swedish by Julia Marshall) 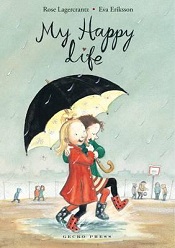 Swedish writer Rose Lagercrantz and illustrator Eva Eriksson are lifelong friends who have collaborated on several titles in their native language together. Julia Marshall’s translations smoothly relate their stories of a carefree life in an unspecified European town to young Americans. Starting with My Happy Life, and following with My Heart is Laughing, early readers are treated to short chapters revealing the sunniest moments in young Dani’s days, many spent with her best friend Ella. Even when Dani has experiences that are not so perfect, she always manages to find the silver linings. The cartoon-like black and white illustrations sweetly convey her adventures with family, friends, and schoolmates. A new installment, When I Am Happiest, was just released in English and I, for one, can’t wait to read more about what brings Dani joy. —Susan Vincent Molinaro, Children’s Librarian