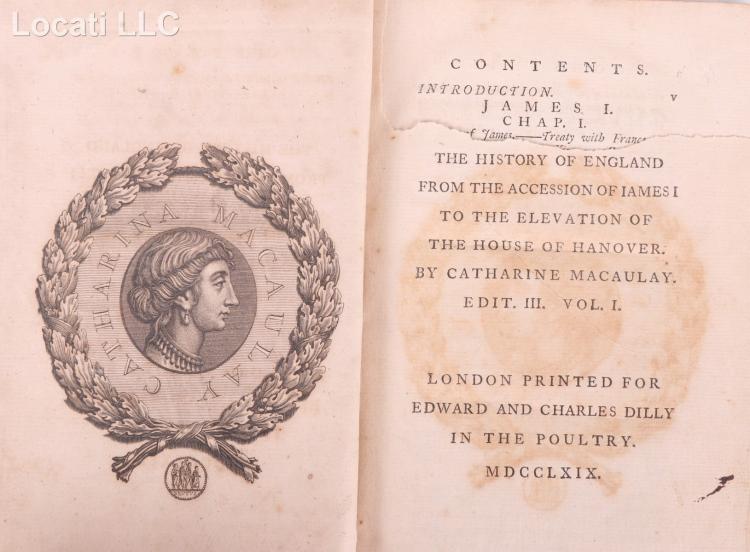 The 18th-century Libraries Online team together with partner libraries will be running a Book of the Month Club throughout 2022, drawing attention to books that appealed to eighteenth-century library goers.

For Women’s History Month in March, the team marks the birth of Catherine Macaulay by spotlighting her sensational History of England, which covered the period from the accession of James I in 1603 to the Glorious Revolution of 1688. In spite of her scandalous personal life and controversial politics, Macaulay’s History was a staple holding at subscription libraries across the English-speaking world. Macaulay’s primary aim was to educate and inspire her readers by retelling the great deeds of the English revolutionaries of the seventeenth century. Project Research Associate Dr Max Skjönsberg will explain how, by defending the regicide of Charles I (and as a woman), Macaulay broke new ground in historical writing, presenting a sharp contrast to Hume’s sceptical History of England (our selection for January), but also to establishment Whig history. As we will discuss, Macaulay’s History became topical as the standoff between Britain and the thirteen American colonies intensified, called by some ‘the foundation of liberty’ for its impassioned defence of republican politics.

Catherine Macaulay’s History of England is available for free online via Google Books. If you would like to dip into the book for yourself ahead of the Q&A, we recommend reading the preface to volume 6.

TO JOIN THE EVENT, REGISTER HERE (free of charge)