Home > Our Events > Art & Activism of the Anthropocene Series: Strange Reality: The Art and Activism of Transitional Environments 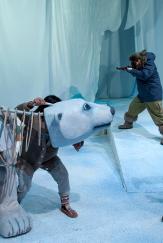 Art & Activism of the Anthropocene Series: Strange Reality: The Art and Activism of Transitional Environments

Climate change is no longer a mere possibility—it's already happening. Glaciers are melting, animal and plant populations are failing, and agricultural practices no longer prevent famine. Around the world, scientists, artists, and activists are addressing climate change in media from nonfiction books to documentary films to live theater. This series brings together writers, journalists, and artists in robust discussion on how they address climate change—and why their work is important in the Anthropocene Era.
Jeff VanderMeer is the author of the bestselling novel Borne and the Southern Reach Trilogy. His books have won the Nebula and Shirley Jackson Awards.
Zaria Forman is an artist whose work has appeared in National Geographic, Smithsonian Magazine, the Wall Street Journal and The Huffington Post, and as part of Banksy's Dismaland.
Gleb Raygorodetsky is a Research Affiliate with the POLIS Project on Ecological Governance at the University of Victoria and the author of Archipelago of Hope, a book that explores the effects of climate change on indigenous communities.

This event is co-produced by the Library and Guernica Magazine, with additional support from Orion Magazine.