Home > Our Events > Conversation: Religion in the Age of Mass Politics with Suzanne Schneider, Ajay Singh Chaudhary, and Anthony Alessandrini 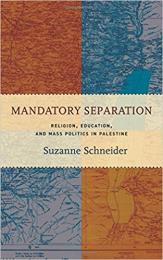 The Library hosts a special recording of the Brooklyn Institute for Social Research’s Podcast for Social Research, as three experts on Middle Eastern culture, history, and politics consider the relationship between religion and mass politics in the modern age. Is religion a source of political stability and social continuity, or an agent of radical change? In what ways have political forces and motivations shaped “timeless” religious beliefs and practices, and vice versa? And how, in light of these considerations, should we understand attempts to create a clear boundary between the religious and the political?

Suzanne Schneider is the Deputy Director and Core Faculty member at the Brooklyn Institute for Social Research. She is the author most recently of Mandatory Separation: Religion, Education, and Mass Politics in Palestine (Stanford University Press, February 2018).

Ajay Singh Chaudhary is the founding and current executive director of the Brooklyn Institute for Social Research. He holds a Ph.D. from Columbia University’s Institute for Comparative Literature and Society through the MESAAS department specializing in comparative philosophy, an M.Sc. in Culture and Society from the London School of Economics, an M.A. and M.Phil in Middle Eastern Studies from Columbia University. His research focuses on comparative philosophy, social and political theory, Frankfurt School critical theory, religion, political economy, media studies, and post-colonial studies.

Anthony Alessandrini is an associate professor of English at Kingsborough Community College, and an affiliate faculty member of the Middle East and Middle Eastern American Center at the CUNY Graduate Center. He was a Mellon Faculty Fellow at the Center for the Humanities at the CUNY Graduate Center in 2008-2009. His work focuses on postcolonial literature and theory and the connection between Middle Eastern literature and culture and postcolonial studies, with a particular focus on the relationship between aesthetics and politics.

This event is co-sponsored by the Library and the Brooklyn Institute for Social Research.

Religion in the Age of Mass Politics.mp3