Home > Our Events > Mary Schmidt Campbell, An American Odyssey: The Life and Work of Romare Bearden, with special guests 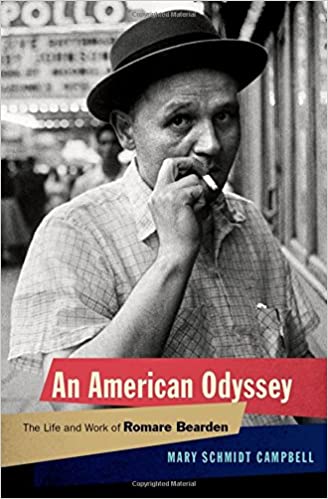 Mary Schmidt Campbell, An American Odyssey: The Life and Work of Romare Bearden, with special guests

PURCHASE AN AMERICAN ODYSSEY FROM THE CORNER BOOKSTORE

An American Odyssey illuminates the life and work of Romare Bearden, whose art celebrated the traditions and ceremonies of African American culture.

By the time of his death in 1988, Romare Bearden was most widely celebrated for his large-scale public murals and collages, which were reproduced in such places as Time and Esquire to symbolize and evoke the Black experience in America. As Mary Schmidt Campbell shows us in this definitive, defining, and immersive biography, the relationship between art and race was central to his life and work - a constant, driving creative tension. Bearden started as a cartoonist during his college years, but in the later 1930s turned to painting and became part of a community of artists supported by the WPA. As his reputation grew he perfected his skills, studying the European masters and analyzing and breaking down their techniques, finding new ways of applying them to the America he knew, one in which the struggle for civil rights became all-absorbing. By the time of the March on Washington in 1963, he had begun to experiment with the Projections, as he called his major collages, in which he tried to capture the full spectrum of the Black experience, from the grind of daily life to broader visions and aspirations.

Campbell's book offers a full and vibrant account of Bearden's life - his years in Harlem (his studio was above the Apollo theater), to his travels and commissions, along with illuminating analysis of his work and artistic career. Campbell, who met Bearden in the 1970s, was among the first to compile a catalogue of his works. An American Odyssey goes far beyond that, offering a living portrait of an artist and the impact he made upon the world he sought both to recreate and celebrate.

Henry Louis Gates Jr. says of the book, "Through her long association with Romare Bearden and his work, Mary Schmidt Campbell possesses a rare understanding of his life and artistry. In this beautifully written volume, she sensitively illuminates his biography and comprehensively traces the trajectory of his career. By brilliantly interweaving the political history of African Americans throughout the 20th century with the emergence of one our foremost artists, she has written a book that speaks to anyone who is interested in American history, art, and culture. Campbell writes that Bearden's legacy is his ability to create worlds; in this biography, she re-creates Bearden's world."

Mary Schmidt Campbell has been President of Spelman College in Atlanta since 2015. She holds a master's in art history and a Ph.D. in humanities from Syracuse University. Previously she was a major force in the cultural life of New York City, including ten years at the Studio Museum in Harlem during which the museum was transformed from a rented loft to the country's first accredited Black Fine Arts Museum. She led the city's Department of Cultural Affairs, then became dean of New York University's Tisch School of the Arts. During the Obama administration, Dr. Campbell served as the vice chair of the President's Committee on the Arts and Humanities, a non-partisan advisory committee to the President of the United States on cultural matters. Among other honors, An American Odyssey received the 2018 Hooks National Book Award from the Benjamin L. Hooks Institute for Social Change at the University of Memphis.

Sherman Edmiston is President of Essie Green Galleries, and is one of the most respected dealers of Black Master works in the United States. A Harlem native holding an MBA from Baruch College, Mr. Edmiston co-founded his first gallery in 1979. There he met Romare Bearden, who strongly encouraged him to deal Master works by African American artists. Mr. Edmiston later moved Essie Green Galleries to Sugar Hill, where he has successfully represented African American painters and the masterful works they have produced. He aims to educate art collectors and the local community about what Black art has to offer.

June Kelly managed Romare Bearden's career for 13 years until his death in 1988. The June Kelly Gallery was founded in 1987 in the historic SoHo district of New York City. The gallery specializes in contemporary paintings, drawings, sculpture and photography and represents work by a diverse group of emerging, mid-career and established artists, many of whom have achieved international recognition and acclaim. In 1996, the gallery was elected to membership in the prestigious Art Dealers Association of America. Ms. Kelly is a member of the Board of Trustees of both Pratt Institute and the Fine Arts Work Center in Provincetown, and is also a member of ArtTable, Inc., and Women’s Forum, Inc.