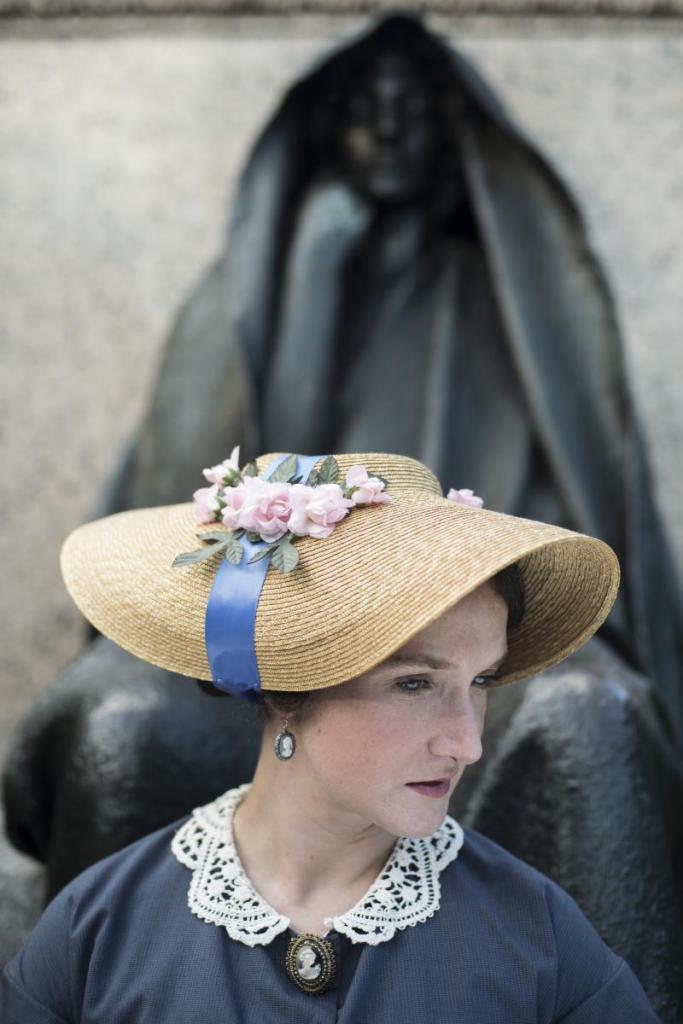 Clover is a new full-length play by Laura Rocklyn and Ty Hallmark exploring the life of Gilded Age Washington socialite and pioneer female photographer Clover Adams. Upon arriving in D.C., Clover dives into the political and social scene - but then the death of her beloved father and possible philandering of her husband subject her to the darker forces that run in her family line.

Natalie Dykstra’s 2012 biography Clover Adams: A Gilded and Heartbreaking Life inspired and guided the playwrights' work. Ms. Dykstra will participate in a conversation with the creators and audience following the performance.

Performers Laura Rocklyn and Sarah Rose Kearns (both featured in last season's staged reading of Manydown) return to the Library in the roles of Clover Adams and Lizzie Cameron, alongside of Nick DePinto as Henry Adams. Ty Hallmark directs.

Laura Rocklyn is an actress and writer based in Boston. She has performed with regional theater companies across the country, where some favorite shows have included The Glass Menagerie and A Tale of Two Cities at Annapolis Shakespeare Company, Sense & Sensibility at The Folger Theatre, Pride & Prejudice at Round House Theatre, As You Like It at Kentucky Shakespeare, and Red Velvet (2018 BroadwayWorld Baltimore Award for Best Actress in a Play) and A Christmas Carol at Chesapeake Shakespeare Company, where she is an Associate Company Member. She has been seen on TV in Legends & Lies:The Patriots and on Investigation Discovery: Southern Fried Homicide. Next, Laura will be touring with History At Play in How Long Must We Wait? a new performance art piece chronicling 100 years of suffrage history, and in the one-woman show I Now Pronounce You Lucy Stone. As a freelance artist, Laura writes and performs one-woman historic character portrayals for educational groups up and down the East Coast, and her original short play Emma is Presented in Washington City was presented as the curtain raiser for the Jane Austen Society of North America's 2016 Annual General Meeting in Washington, DC. She has published two articles of literary criticism in Brontë Studies. Laura is currently pursuing an MFA in Creative Writing at Emerson College. She holds an MFA from The Shakespeare Theatre Company’s Academy for Classical Acting at The George Washington University, and a BA in Theatre and English Literature from Middlebury College.

Ty Hallmark is the Founding and Producing Artistic Director of Maryland-based Ally Theatre Company, winner of the 2019 John Aniello Award for Outstanding Emerging Theatre Company. For Ally she has directed The Most Spectacularly Lamentable Trial of Miz Martha Washington by James Ijames and, most recently, Rasheeda Speaking by Joel Drake Johnson. Prior to her work at Ally, Ty was the Tour and Company Manager for Remarkably Normal, a new play developed around the issue of women's reproductive rights by DC-based non-profit Advocates for Youth. She accompanied the show on an 8-city National Tour in May and June 2016. Ty is a former company member of Chesapeake Shakespeare Company, where she appeared in Cymbeline, Cyrano de Bergerac, and The Country Wife and also assistant-directed Pride and Prejudice and The Taming of the Shrew. For Pallas Theatre Collective she directed The Taming of the Shrew and Major Barbara and has worked as a director, actor, or producer for Pinky Swear Productions, Venus Theatre, Keegan Theatre, The Source Festival, and the Capital Fringe Festival, among others. She spent 7 years as a local tour guide for D.C. based Washington Walks, where she first came upon the compelling stories of Clover and Henry Adams. Ty is a professional Advocacy and Events Manager and is currently studying for her Master's Degree in Library and Information Sciences at the University of Maryland - College Park. She received her undergraduate degree in theatre from Rhodes College in Memphis, Tennessee and completed The Studio Theatre Acting Conservatory Program.

This performance is sponsored by Alexander Sanger in honor of Jeannette Watson Sanger.