Home > About Us > Christopher Gray 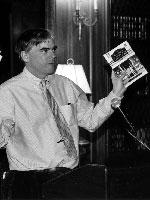 Writer of the "Streetscapes" architectural history column for The New York Times, Christopher Gray had been a trustee from 1998 to 2005.

The following excerpt comes from addresses to Library trustees, staff and friends at an event launching the anniversary celebration on November 5, 2003.

When I walk through the door, I think of the formation of the Library with 650 volumes in 1754. I think of William Livingston, one of our founding trustees, who was later governor of New Jersey, served in three Continental Congresses—I think of him taking the trouble to design our first bookplate, with the four branches of art and a depiction of New York as Athens, and here I am, touching William Livingston's design. I think of all the people at work now, who are working on books that will receive terrible critical attention like Moby-Dick and yet in 50 years will be considered part of the canon. I think of the person addressed by John MacMullen, the Librarian in 1856—listen to this—"Through the dim haze that veils the future, I see the interior of a noble library, with all its manifold enjoyments, an ample reading room, whither the telegraph, on lightning wings, concentrates intelligence from all quarters of the world." Now he was not talking about the World Wide Web, but a century and a half later how relevant that is to what we're doing.

There are many institutions in the history of New York that thought they were indispensable, and then they were forgotten a generation later. The trustees were really—perhaps in a genteel way—clawing and biting their way to keep this institution vital and keep it alive. It's that sense of struggle, of a common purpose, that always really leaves me humbled here and makes me feel privileged to have been a member for thirty years.