Home > About Us > Eleanor Dwight 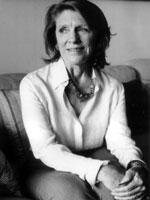 The New York Society Library, from the beginning, was the perfect refuge for me, a Ph.D. student searching for Edith Wharton, who I soon learned was a library maven herself. As I climbed the stairs, the Library's past trustees stared out at me from the photographs on the walls—New Yorkers from families Wharton might have known. Eventually, I was able to claim the most comfortable chair in the Members' Room and pile my finds on an adjacent table—titles Wharton had read—from the Blashfields' Italian Cities to Ruskin's many volumes, plus samples of "that wide expanse of the classics—English, French and German"—she herself had plunged into. I also devoured books she had written—all easily found in the accessible open stacks.

As I read and scratched notes and escaped into Wharton's worlds, I came to understand her own passion for libraries. In The Decoration of Houses, she instructs readers on decorating them: "The housing of a great private library is one of the most interesting problems of interior architecture." Books should be "the chief feature" and ornaments "used with discrimination." In her fiction, she defines characters by what they do in libraries. For Newland Archer in The Age of Innocence, "it was the room in which most of the real things of his life happened," like getting the news that May was to have a child. In The House of Mirth, the library of dreary Percy Gryce, would-be suitor of Lily Bart, is "in a fire-proof annex that looked like a mausoleum," while the philistine Trenors' library, "was in fact never used for reading, though it had a certain popularity as a smoking room or a quiet retreat for flirtations."

And what about Wharton's own libraries? Visitors to "The Mount," her newly restored house in Lenox, find it amusing that she was photographed for publicity at her smart writing table, when actually she did her writing in bed. Her father's library got her started. While squatting on the thick rug of the sixteen foot-square room, she dragged out book after book "in a secret ecstasy of communion: I say in secret, for I cannot remember ever speaking to anyone of these enraptured sessions. The child knows instinctively when it will be understood, and from the first I kept my adventures with books to myself." She thus marked off for herself a space where she could read, a place that also became her inner world: "There was in me a secret retreat where I wished no one to intrude, or at least no one whom I had yet encountered." Her descriptions capture what we library enthusiasts crave - and can discover at our New York Society Library.