Home > About Us > History of the Library 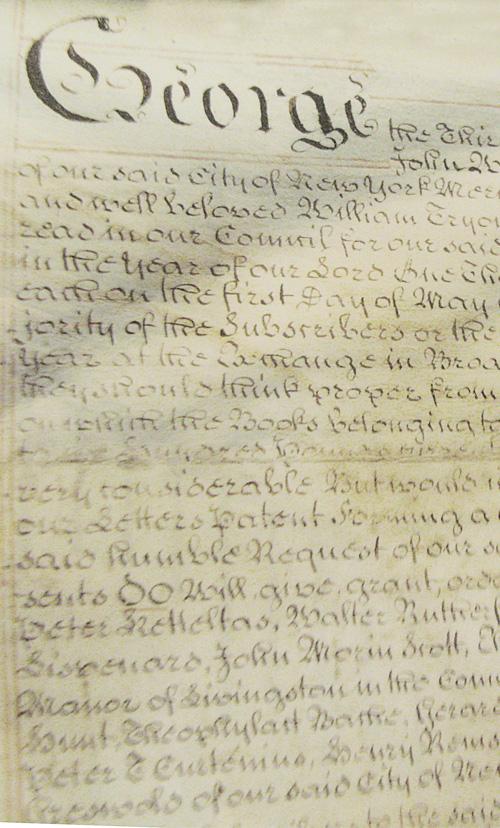 The charter from George III, received in 1772, on display at the Library.

History of the Library

For more than a quarter of a millennium, the New York Society Library has played a central role in the evolution of the availability of books in New York City and the country. If New York is the communications capital of the United States, this library is arguably one of the reasons why. It is no surprise that it has attracted such luminaries as George Washington, Herman Melville, Willa Cather, and Truman Capote.

In 1754, when there was no library in the city open to the public, the New York Society—a group of six civic-minded individuals—formed the Library in the belief that a subscription library which anyone could join, and offering a broad range of books, "would be very useful as well as ornamental to the City." It opened in a room in the old City Hall, on Wall Street facing Broad Street, and for a century and a half—until the founding of the public library system in 1895—was known as "the City Library," which in fact is what it was. It received a charter from George III in 1772, confirmed after the Revolution by the New York State Legislature.

During the Revolution, the Library's books were looted by British soldiers occupying Manhattan; some were torn up to make wadding for rifles and others were sold for rum. After the war, a few books that had been stored at St. Paul's Chapel in lower Manhattan were recovered, and in 1784 others were found through advertisement.

In 1789, the Library reopened in its previous quarters in the old City Hall. In 1789 and 1790, when New York was the nation's capital and Congress occupied the building—then renamed Federal Hall—it served effectively as the first Library of Congress; it was used by George Washington and John Jay. It was at this point that two books were charged out to George Washington but were never returned. In 2010, representatives from Mount Vernon formally presented the Library with another volume of one of the missing books, The Law of Nations by Emer de Vattel.

In 1795, the Library, having grown to 5,000 volumes, moved into its own building at 33 Nassau Street, where Washington Irving and James Fenimore Cooper were visitors. As the city has grown, the Library has followed readers as they moved uptown—in 1840 to Leonard Street and Broadway, where Henry David Thoreau and John James Audubon were browsers; in 1856 to 109 University Place, the haunt of Herman Melville and Willa Cather; and in 1937 to its present quarters at 53 East 79th Street, frequented by W.H. Auden, Clarence Day, Lillian Hellman, Barbara Tuchman, David Halberstam, Wendy Wasserstein, Shirley Hazzard, P.G. Wodehouse, Mary McCarthy, and thousands of others. After 267 years of intimate involvement in the life of the city, the Library remains a "useful as well as ornamental" place.

Articles and Books About the Library

A list of articles and books written by library staff, members, trustees, and others.

You may also want to view a more detailed history of the Library for additional information.