Home > Library Blog > Dr. Strangebooks or: How I Learned to Stop Worrying and Love the Open Stacks 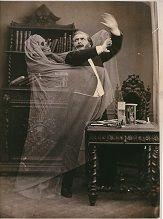 Dr. Strangebooks or: How I Learned to Stop Worrying and Love the Open Stacks

Even those of us lucky enough to work at the Library sometimes forget the breadth of the collection. I was reminded of this the other day while wandering through Stack 11. Sandwiched between some very serious books on psychology and neuroscience is a quite intriguing assortment of books pertaining to the paranormal. Yes, this dignified Library is home to a number of books about ghosts, witches, and practitioners of “occult sciences.” In case you haven’t found it yet, it is my pleasure to introduce you to the wondrous and witchy world of the 133s. 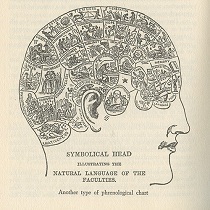 If you want a glimpse of the mysteries contained in this category of books, you could not do much better than The Complete Illustrated Book of the Psychic Sciences by Walter and Litzka Gibson. This charming edition runs the gamut from Aeromancy (divination from the air and sky) to Xylomancy (divination from pieces of wood) with many –ologies, -osphies, and –mancies in between.  The guide is presented without irony, so if you’re looking to examine the bumps on someone’s head or the loops of someone’s handwriting, you can do so straightaway. There are helpful illustrations throughout. Lest you doubt the Gibsons’ bona fides, they published several books on these subjects. And in case you doubt the entertainment value, Mr. Gibson was tasked with creating the print version of The Shadow after the popularity of the radio version. He gave The Shadow his alter ego, Lamont Cranston, and his backstory.

Perhaps you’d rather skip straight to the witch-hunting. In that case, you can pick up a translation of the late 15th century witch-hunting treatise, Malleus Maleficarum. Heinrich Kramer’s book owed part of its success to its rapid spread across Europe thanks to the Gutenberg printing press, developed earlier in the 15th century. The Library owns a 16th century printing as part of the John Sharp Collection, which we exhibited in 2003.

Following the deaths of his wife, son, and several other family members, Sir Arthur Conan Doyle found solace in the world of spiritualism. Quickly he became one of its most public practitioners, publishing several books on the subject, including the five found at 133.9 D.  Of these, The Edge of the Unknown is of particular interest. Its opening essay defends Doyle’s belief that Harry Houdini possessed supernatural power, despite Houdini’s role as the foremost debunker of the supernatural of his time. The dustup over this essay caused a parting of the ways between the former friends.

With many other books about witchcraft, you can find Aldous Huxley’s account of the demonic possession of a convent of nuns, The Devils of Loudun. This nonfiction novel is based on the trial of a 17th century French priest, convicted of sorcery and burned at the stake. Who could resist such a thing? Better yet, who would want to?

While the above are some of the better-known offerings, I was surprised to come across a book by muckraking journalist Upton Sinclair, detailing his wife’s telepathic abilities. Mental Radio includes an introduction by William McDougall, a noted psychologist, who added the books claims to his evidence that telepathy was scientifically provable.  McDougall would go on to establish the Parapsychology Laboratory at Duke University. 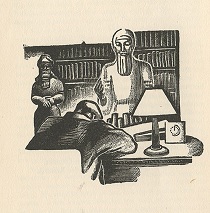 While a few famous authors appear on these shelves, you are more likely to find famous names among the ghosts. The Library owns several books containing descriptions of hauntings, and one of the most charming (if not the most outlandish) is Men Who Wouldn’t Stay Dead by Ida Clyde Clarke, published in 1945. This terrific collection includes accounts of the ghosts of Napoleon, Walt Whitman, and Oscar Wilde among others, though Clarke’s evidence isn’t always convincing. About Wilde’s ghost, she offers “Many very intelligent people in different parts of the world are firmly convinced the spirit of Oscar Wilde came back to earth.” Well, I guess we’ll just have to take her word.

Relating her own stories, Harriet Shelton describes “spirit messages” she received at numerous séances from the ghost of Abraham Lincoln.  Lincoln was kind enough to comment on the political climate of the time, offering advice to America’s leaders regarding the Soviet Union. This is all vividly recounted in Abraham Lincoln Returns, Shelton’s book from 1957.

Lest you think this collection of books is a relic of a less skeptical era, we still manage to find great new titles to add. In 2012, we purchased The English Ghost by celebrated historian and novelist Peter Ackroyd. It seems as if every corner of England has a ghost, and Ackroyd does a great job of giving each their due. As he claims in the introduction, “the English see more ghosts than anyone else.” After reading this book, you’ll believe him. 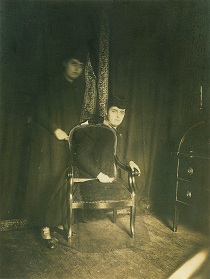 Having grown up in houses he believed were haunted, Roger Clarke attempts to find evidence of ghosts in their environs in A Natural History of Ghosts. As in other works of natural history, Clarke attempts a taxonomy of these spirits, looking for similarities between these hauntings across time and place that might be evidence of a real phenomenon. It’s a fascinating book that veers between Clarke’s desire to believe and his growing skepticism.

Moving away from the 133s (physically, not thematically), there is a great book of photographs that deserves not to be overlooked. At 779P, you’ll find The Perfect Medium: Photography and the Occult, the catalog of a 2005 Metropolitan Museum exhibition.  In it, you’ll find examples of double exposure “ghosts,” the Cottingly fairies, séances with levitating tables, and all sorts of other wonders. It’s definitely worth a look.

As far as I I’m concerned, the 9 levels of open stacks are one of the best reasons to be a member of the New York Society Library. Luckily, I’m in some good company. In a 1961 letter included in her book 84, Charing Cross Road, Helene Hanff writes, “so I can’t buy any books but back in October somebody introduced me to Louis the Duke de Saint-Simon in a miserable abridgement, and I tore around to the Society Library where they let you roam the stacks and lug everything home, and got the real thing.” I’m glad that’s still true. Oh, and if you wanted to find Hanff’s book, you’ll only need to roam a few aisles over in Stack 11.