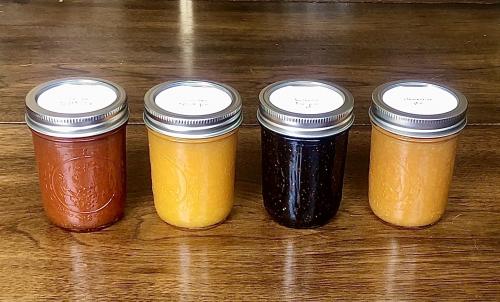 Here we are at Week Sixteen of (Semi)Lockdown Library, and while we’re less locked down than we were, most of us have still been spending more time indoors than we’d like. The solution? Bring the outdoors in and capture summer in a jar.

Making jam may seem intimidating—who among us does not immediately think of poor Meg March sobbing that “the jelly won’t jell!”? But while Alice and the White Queen must constantly hope for jam tomorrow, there’s no reason you can’t have jam today. Jam and jelly aren’t technically the same, of course: jam has chunks of fruit, whereas jelly has the solids strained out. Meanwhile, preserves involve whole fruit, marmalade includes pieces of citrus rind, and butter (as in apple butter) is puréed. A sidestep from that is curd, which mixes in butter and eggs for a rich, creamy flavor. 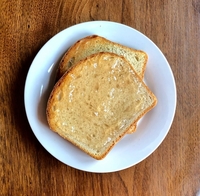 But for all of these, the basic strategy is the same: cook the fruit to break down the structure, boil off some of the moisture, and activate the pectin. Pectin is what gives jelly that jell, and some fruits—such as the apples in apple bourbon jelly—have more naturally occurring than others—like the apricots in amaretto apricot jam. Not all jam needs a jiggle, but if yours does, you can always add more. To get technical for a minute: most recipes call for HM (high methoxyl) pectin, which reacts to the sugar in the jam mixture, but a particularly low sugar recipe, such as a savory jelly, may require LM (low methoxyl) pectin instead, which relies on calcium that you add alongside it. I’ve had trouble reliably finding the variety I need at the grocery store, so you may want to order yours online.

If you’re making a big batch of jam (and why wouldn’t you?), you might consider canning whatever you don’t plan to eat right away. This involves packaging hot jam into sterilized jars, carefully removing any air bubbles, and processing the jam by boiling the jars until they form a vacuum seal that keeps bacteria out. Yes, careless canning does carry the risk of botulism, but once you’ve practiced a bit, it’s easy to get the hang of it. Most recipes will have suggested processing times, but you can always check with the National Center for Food Preservation to be safe. 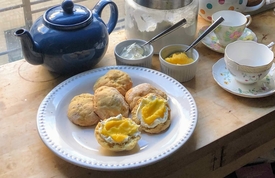 You don’t need a lot of equipment for the actual jam beyond a large pot and a food thermometer, but canning requires a bit more gear. You can buy home canning kits that include jars, canning racks, jar lifters, funnels, and bubble removers, all of which range in price and fanciness. Or do what I did, and gather up a case of Ball jars, a makeshift rack to keep the jars off the bottom of your stockpot, and some disposable chopsticks to get rid of any air pockets.

Not up for that fussiness? Take a shortcut with freezer jam, which, as the name suggests, can be kept in the freezer almost indefinitely. As long as you’re willing to wait for it to thaw, you can don’t need to can your jam in order to preserve it.

Either way, tasty treats await you: balsamic fig jam paired with cheese; citrusy clementine or vanilla grapefruit jam balanced against rich trifles and cakes; scones topped with clotted cream and lemon curd for an Austenian afternoon tea. Or keep it simple by spreading a smear on a slice of bread, homemade or not, and enjoying the fruits of your labor.