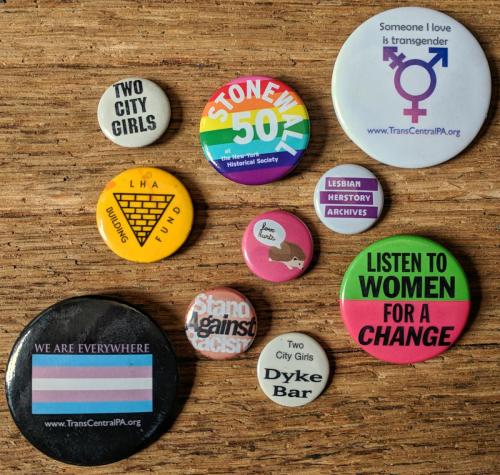 June is LGBTQ Pride month, and this year in particular, this month celebrates the 50th anniversary of the 1969 Stonewall Riots. Stonewall has become synonymous with the beginning of homosexual resistance to political and social discrimination and harassment. Since the Stonewall Riots, activist organizations formed and began working for the rights of LGBTQ persons, including anti-discrimination laws, gay marriage, and health care for those affected by the 1980s AIDS crisis which amounted to a queer revolution. In honor of the queer revolution, several local institutions are exhibiting queer materials in their collections and fostering discussions on queer history and contemporary structures of queer life. The exhibitions include Nobody Promised You Tomorrow: Art 50 Years after Stonewall at the Brooklyn Museum, Love & Resistance: Stonewall 50 at the New York Public Library, Art after Stonewall, in both New York University’s Grey Gallery and the Leslie-Lohman Gallery, and Stonewall 50 at the New-York Historical Society. I’m writing here about By the Force of Our Presence, part of the Stonewall 50 exhibition which includes a historical perspective on lesbian feminism pre- and post-Stonewall in honor of a lesser-known date, the 45th anniversary of the Lesbian Herstory Archives.

The Lesbian Herstory Archives was founded in 1974 by a group called the Gay Academic Union. It was a collective response to the pejorative references to homosexuality found in academic spaces, including archives and libraries both public and private. Many keywords and search terms had derogatory descriptors attached to them: for example, searching through a card catalog (remember those?) for “homosexuality” would result in a “See” cross-reference card stating See ‘perverted,’ or other negative descriptors under which homosexual material was listed. In some cases, university libraries kept homosexual materials, for example, the poetry collection of Sappho, in closed stacks and required students to have departmental permission to visit them. In 1974, one could not escape the homophobia perceived overtly and covertly in society at large. The idea behind the Lesbian Herstory Archives was to collect a large body of material that represented the broadest spectrum of lesbian experience possible, breaking these structures which restricted access and perpetuated anti-homophobic sentiments in educational spaces. Furthermore, it was created with a look to the future, to provide later generations with something rare: an intergenerational lesbian history.

Thus the Lesbian Herstory Archives was born. Every weekend, a Volkswagen brought in half-full milk crates (remember those?) filled with early lesbian ephemera from community bookstores, poetry readings, women’s music festivals, and activist group meetings. The small group of co-founders found themselves traveling across the country, making transnational connections through the lesbian community. This was a true feat in grassroots archiving and in the queer history in the United States. At a time when homosexuality was heavily censored and penalized, it would not have been possible without first establishing trust in these marginalized communities and stressing the importance of collecting their history. By 1990, the apartment of Joan Nestle and Deb Edel, which originally housed the Lesbian Herstory Archives, became too crowded with books, manifestos, photographs, records, audiocassettes, and other materials, requiring a more final move into a permanent location. In 1993, the Lesbian Herstory Archives opened the doors of its Park Slope brownstone to the community where it continues to reside and grow with the help of volunteer organizers, known collectively as Archivettes.

So what’s so great about the Lesbian Herstory Archives? Several really groovy things. Not only is it the largest and oldest repository of Lesbian-related materials in the nation, but it has been instrumental for the development of queer history and theory, providing perspectives on queer life before and after the Stonewall Riots. Many authors who speak on the intersections of race, class, feminism, and queer theory such as Audre Lorde, Joan Nestle, Gloria Anzaldua, Adrienne Rich, and Dorothy Allison have special collections there. The LHA has also been a focal point in the discussion of marginalized communities taking control of their history, providing a model for sustainable grassroots archiving. And those “See” cross-references? Well, once the Library of Congress got wise, the system slimmed down to four LC subject headings for the LGBTQ community, a small but effective change in the right direction. While these changes have occurred over the course of decades, they have helped make the world a bit less homophobic and amnesiac towards lesbian history, just as the motto suggests: “preserving the memories of the lives we have lost.”

For further reading on the topic of feminism in archiving and queer spaces consider:

For more books related to history and lesbian relationships:

And books that can also be found at the Lesbian Herstory Archives related to social issues:

The Stonewall 50 exhibition is at the New-York Historical Society from now until September 22. If you wish to stop by the Lesbian Herstory Archives to look around the collection itself, please check the calendar at lesbianherstoryarchives.org for open hours, or email to schedule an appointment.