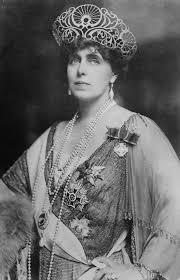 Necromancers of the Public Domain

Each month, the Theater of the Apes production company plucks a long-forgotten volume from the New York Society Library’s shelves and resurrects it as a low-budget variety show called the Necromancers of the Public Domain – a hilariously funny and entertaining show comprising visual art, skits, music, and surprises. On April 23, the Necromancers take on My Country by Marie, Queen of Rumania (London: Published for the Times by Hodder and Stoughton, 1916) right here in the place where it all began (click here to register for the event.) I talked to New York Society Library member Ayun Halliday, founder of the Theater of the Apes (and self-described Queen of the Apes), about the show.

How did you first hear about the Library?
I was moving from Brooklyn to East Harlem, and was bopping around the Internet, researching nearby (and relatively nearby) places where my husband and I could hide away to write.

Where did the idea for a variety show based on a long forgotten volume come from?
I'm interested in adaptation and poor theater, and it's definitely cheaper to adapt titles that are in the public domain. As far as the variety show aspect, that's a thing I really miss about Chicago. It seems like my friends there are always hatching new ones, and cross-pollinating by participating in each other's shows - the 99cent Store Show, the Encyclopedia Show...
It occured to me that I could start a Chicago-style variety show here, and that it might be fun to have an ongoing creative project that wouldn't entirely take over my life. It's an exercise in letting go of control, and creating opportunities for others.

How did you come across the Masterpieces in Color series book about Jules Bastien-Lepage (the book selected for the very first show)?
I like to write in the top floor stacks, especially when I can snag the John Cleve Green alcove. Every couple of hours, I permit myself a little break and have a rummage through the nearby shelves, admiring endpapers and such. Bastien-Lepage's spine was the right thickness - which is to say, not very. I really loved the font  and the painting, Hay Making,  that is reproduced on the cover. It is a very appealing little object, which is important to me, because I make a big deal out of carrying the book onstage like some sort of holy relic. I had never heard of Bastien-Lepage before, and my ignorance was also part of the appeal.

How did you decide on Campward Ho! for the 2nd show and My Country for the show coming up at the Library?
Campward Ho! was also shelved near John Cleve Green. The subject was a natural fit - I was a happy camper as a child, and worked at a sleepaway camp in New Hampshire not too long ago so that my children could go as staff kids. The photo illustrations are a bit small and blurry, but the captions are poetic, and therefore funny. I was surprised that the author had such a robust, dare I say, feminist voice. She was very frank about things like latrines and natural body processes, and emphatic that healthy girls were capable of roughing it and participating in a variety of physical activities that in 1920 were deemed more suited to boys.

I like it when a nearly-hundred-year-old book surprises me. Sadly, one thing that doesn't surprise me is when naked racism rears its ugly head in an otherwise great candidate. There was one rousing autobiographical tale written by a real he-man adventurer - fantastic pictures and some gripping, hilariously self-aggrandizing anecdotes - but his attitude toward the "natives" led me to disqualify it on the spot. I don't want to put artists in the position where they have to pussyfoot around that sort of stuff or feel like I have dictated what they must write about by selecting that particular book.

My husband was a bit suspicious of the book for our upcoming show - My Country by Marie of Romania. Although we performed together in a Romanian theater festival, he is much better informed about world history, World War II history in particular, and a love letter to Romania raised a red flag with him. It forced me to do a bit of research on Queen Marie - I actually did the same with Jules Bastien-Lepage. It's important to know who you're dealing with. The book was published in 1918. She died in 1938. I decided to proceed.

The book itself is so beat up, I almost didn't get to check it out. I think it will likely go to the book hospital when I return it, which is fitting since the very first photo in it is of Marie in her World War I nurse's uniform. Everyone who's seen the picture thinks she's a nun ... which suggests that I'm not the only one whose knowledge of her is spotty.
My Country also represents a departure for me, in that I left my Stack 12 comfort zone to prowl around the basement. I thought it might be fun to do a book about bugs. I found a great one, but the circulation desk deemed it too damaged to check out... Marie is actually Anne Baxter to a spider's Bette Davis.

What was the reaction of the actors & performers to this idea? Did they groan or cheer?
Most of them have been into it, though a fair number express some initial confusion. The concept can be a bit difficult to explain, and not everyone does a close read of my sprawling attempts to do so via email. The ones who get it really get it. For Bastien-Lepage, I was quite blown away by Charlie Neiland's bitterweet song about the quality of light in the paintings. I had just sort of assumed everyone would take a slightly ironic, mocking stance, given that the book's language is so antiquated and over the top. Charlie was able to look past that, and connect with something universal. I didn't even meet him til the night of the show - he's in a book-themed band, Lusterlit, with one of the other performers, Susan Hwang, and had heard her talking about Necromancers, and asked, through her, if he could participate too. His contribution expanded my concept of what the show can be - that lovely mix of funny, beautiful, naughty, serious, sad... It definitely feels cathartic at the end, when I invite the audience to join us in reading aloud a short passage to close the vortex before returning the book to the New York Society Library.

A long time ago, I did a solo show based on my experience of studying anatomy at the Chicago School of Massage Therapy, and at one point, I projected a cadaver video that someone with med school connections secured for me. I always wondered who that cadaver had been, and what he would have thought about being associated with a scrappy, low budget performance piece in a black box theater. It's a bit like that with the forgotten books we necromance.

How much time do you give them to come up with a skit/sketch/musical?
There's usually about a month between the time I announce the title and the performance, though how they spend that month is up to them. I think some really comb through the material carefully, honing their piece over time, while others leave it to the last minute. For Campward Ho, one of our performers, Dejen Tesfagiorgis, confessed from the stage that he hadn't actually read the book, and then he went on to do this virtuoso improvisational rhyming rap based on an audience member's suggestion. It was totally in keeping with the spirit of the evening, though good thing he wasn't first in the line up.

Are you taking suggestions?
Sure, why not? Pro tip: keep the number of illustrations high and the page count low.

Ok, Library members, get to work combing those stacks!