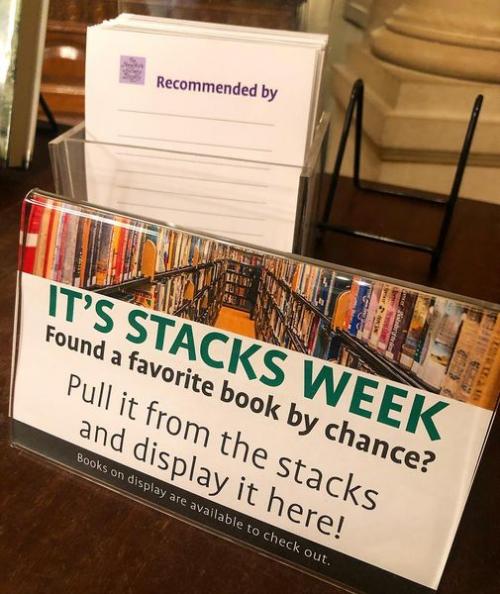 From November 15 to Thanksgiving, we observed our own Library holiday: Stacks Week! It celebrates our own 300,000+ print books and magazines and the twelve stack levels where they live. Of course, as we point out annually, we do that every day anyway! - or, as I like to think, we try to honor Stacks Week in our hearts and keep it all the year.

In the building, members and staff recommended some of their favorite overlooked, fun, or quirky stack finds - click here to go straight to the recommendations.

This year a number of our fellow subscription and independent libraries also joined us in showing off stacks: 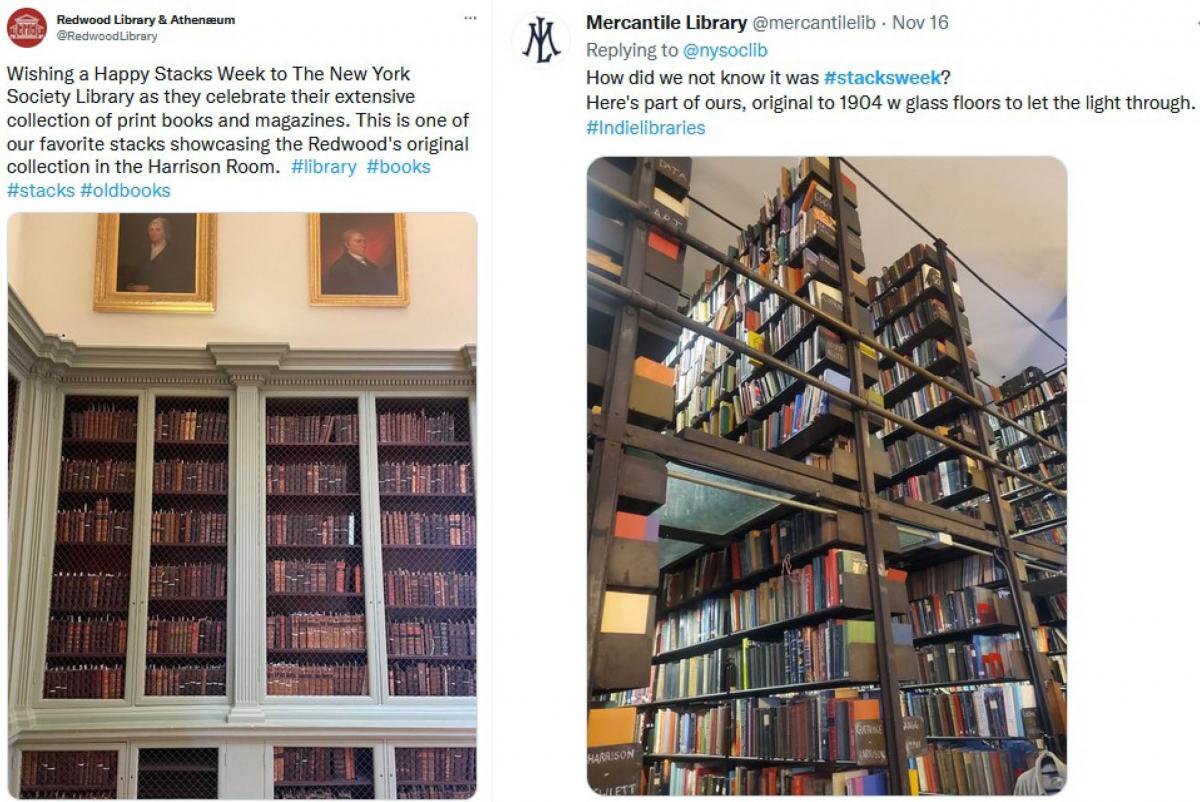 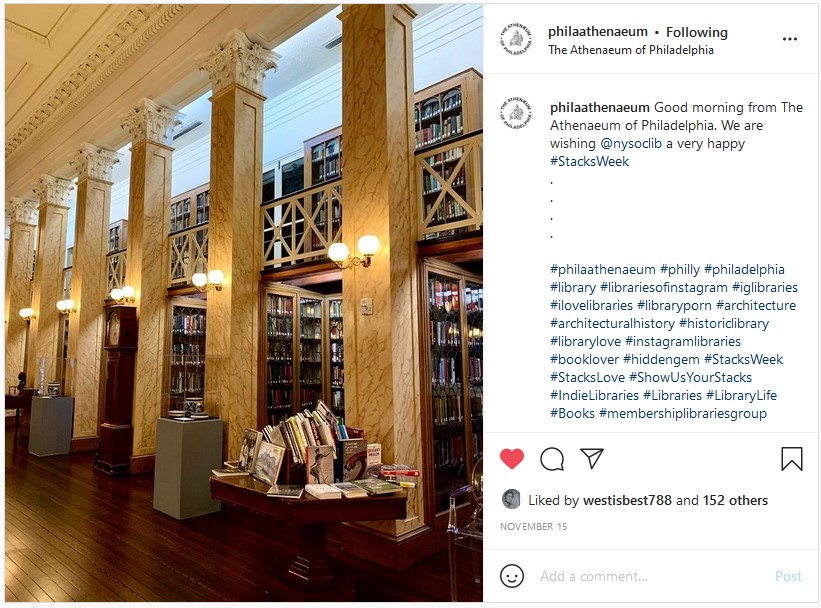 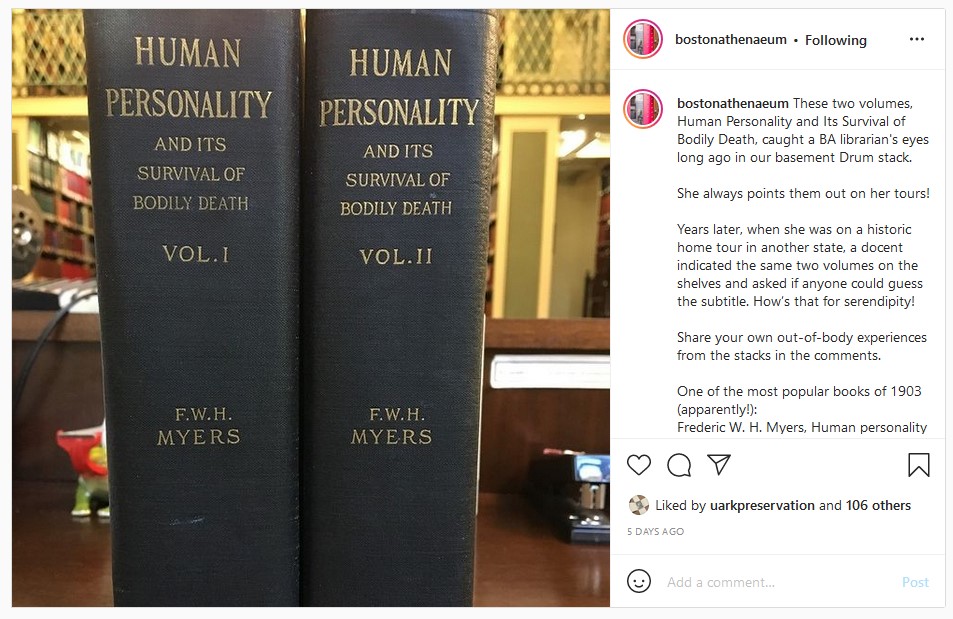 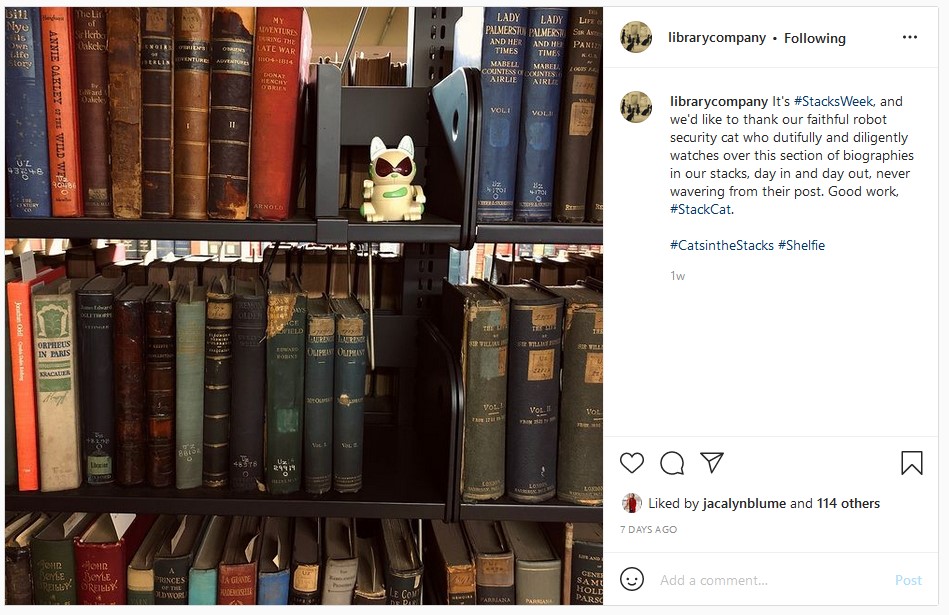 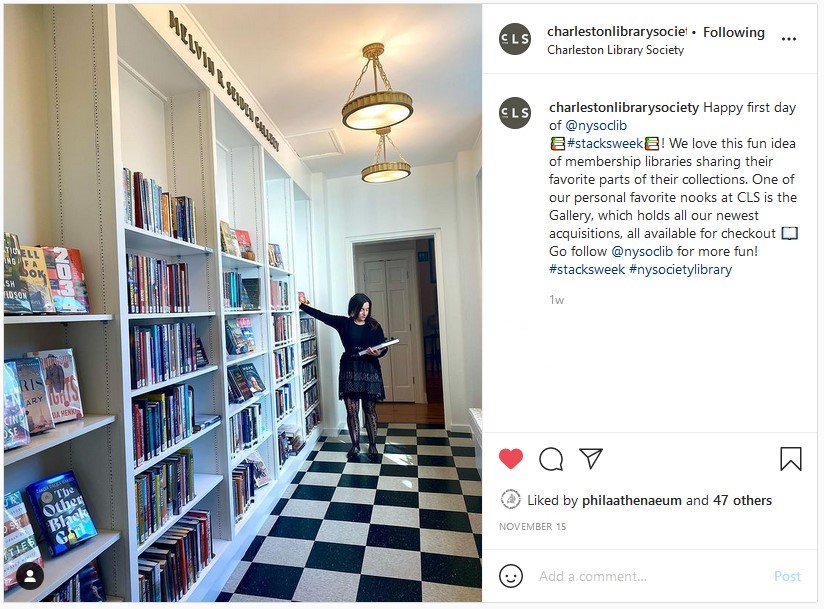 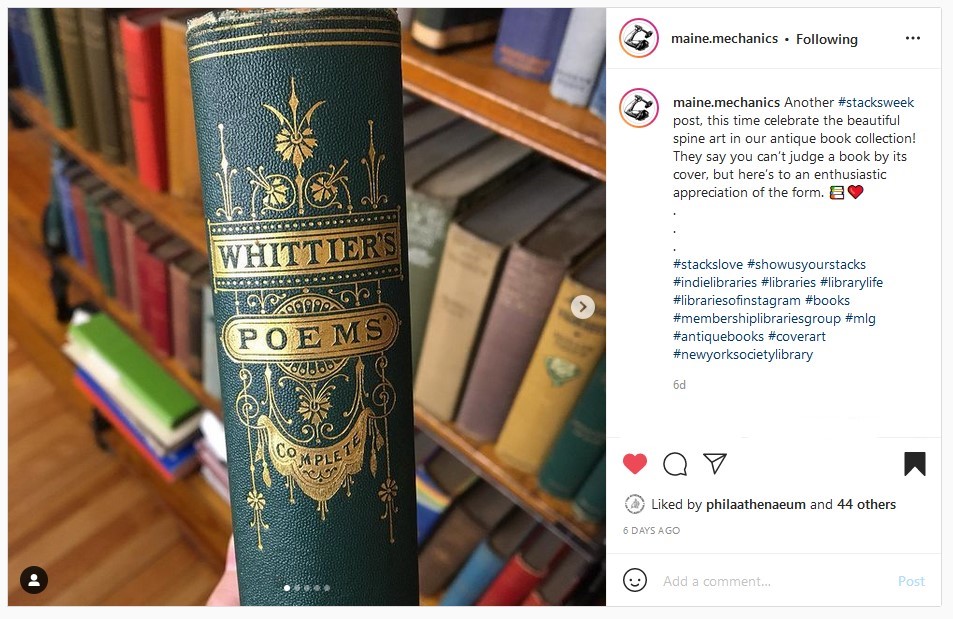 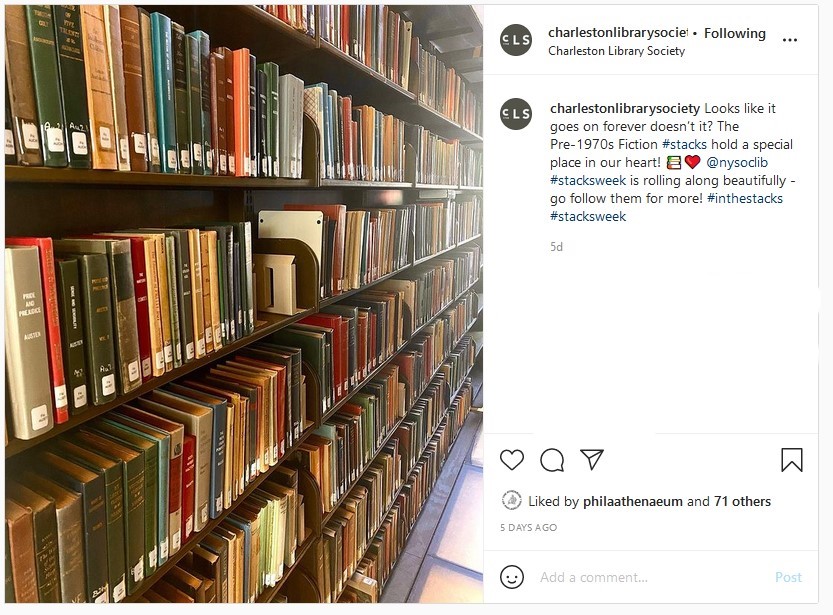 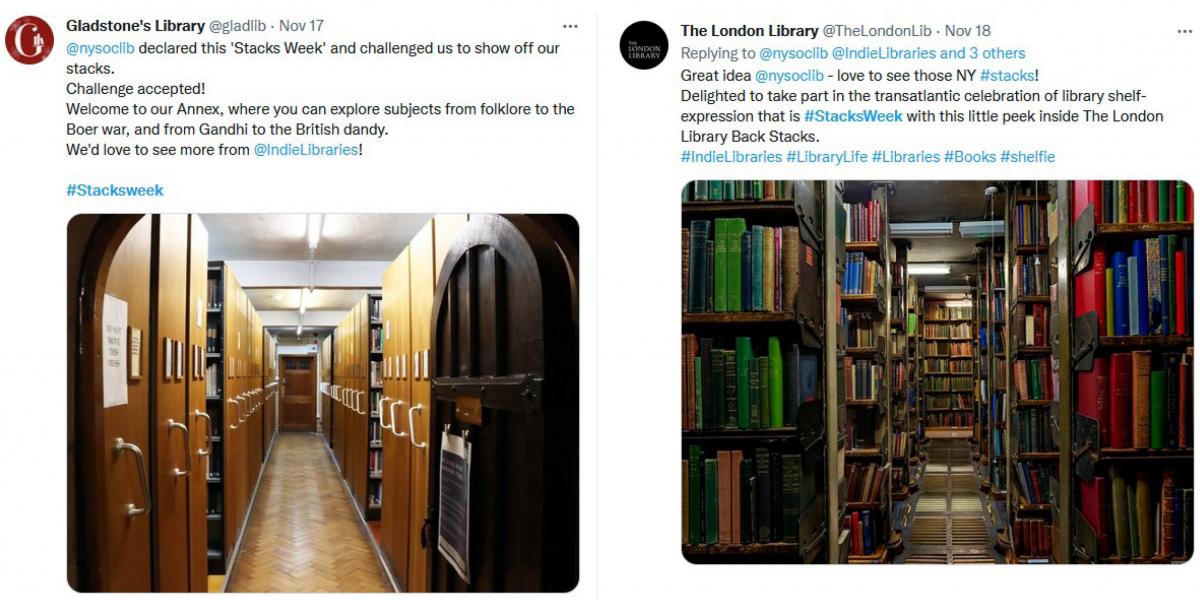 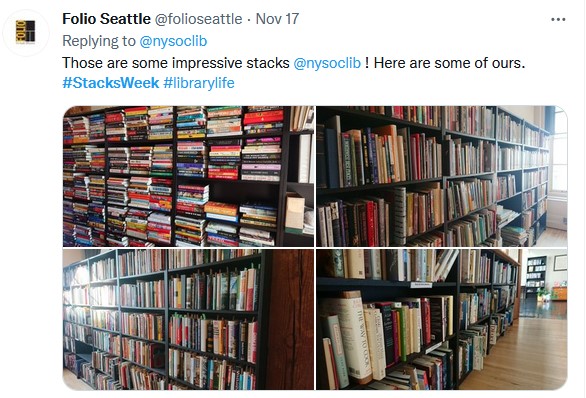 THE BOOKS
(in loose order of submission)

Nancy Lemann, Lives of the Saints: A Novel
Hilarious! (and short.)
– Sarah Callery

Hanan Al-Shaykh, One Thousand and One Nights: A Retelling
A collection so powerful that it honors the stories told by Scheherazade in a way to make her proud.
- Marialuisa Monda

Alistair Urquhart, The Forgotten Highlander: My Incredible Story of Survival During the War in the Far East"
The gripping, terrifying World War II story of a Scotsman who, when everyone fell around him, was just too ornery to die.
- Sara Elliott Holliday

Overseas Press Club of America Cookbook, edited by Sigrid Schultz
This book calls itself a cookbook, but it’s also a cool collection of anecdotes about food from notable journalists. The editor, Sigrid Schultz, is one of the correspondents in Judith Mackrell’s new book. I don’t know how good the recipes are, but it’s great historically.
- Alexa Van Gilder

Cecil Woodham-Smith, The Reason Why
The only work of military history that has ever made me laugh out loud – repeatedly. If Lytton Strachey had written an account of the Crimean War it might be as cool, funny, and morbidly interested as this.
- Lorin S.

Wendy Williams, The Language of Butterflies: How Thieves, Hoarders, Scientists, and Other Obsessives Unlocked the Secrets of the World's Favorite Insect
Fun book to read if you are interested in learning more about butterflies!
- Mirielle Lopez

William Sansom, The Body
Proof that it is possible to write a comic novel about obsessive jealousy. By the writer once known as “the English Kafka.”
- Lorin S.

Alexander Baron, The Lowlife and King Dido
Alexander Baron is best known for his war novel From the City, from the Plough. These two novels of life in the margins of East London are excellent and should be better known. Tough, vivid character studies for fans of Patrick Hamilton and Simenon’s ‘les romans durs.’
- Steven McGuirl

Halldór Laxness, Independent People
I read this epic in 2016, after a friend mentioned it was their favorite book, and several others mentioned they could never finish it despite the best of intentions. Curious, and ready for a challenge, I found I couldn’t put this book down. To this day, I find my mind drifting to Bjartur and Asta, and their dual struggles for survival and independence in this harsh world.
- Barbara Bieck

George Toles, Paul Thomas Anderson
With his next film being released over Thanksgiving, there’s no better time to dive into the work of celebrated writer-director Paul Thomas Anderson. In this book, George Toles follows Anderson from the open narratives of Boogie Nights and Magnolia through the pivot that led to the Janus-faced masterpiece The Master, a favorite of mine.
- Freddy Kpeli

Maeve Binchy, Light a Penny Candle
One of my favorites, lots of emotion/family, gives a great feel for Ireland and the welcoming country.
- Janet Howard

Betty Smith, A Tree Grows in Brooklyn
My first family saga. It got me hooked!
- Linnea Holman-Savapoulas

Roy Heath, The Murderer: A Novel
An instantly engaging story that darkens and suprises as it goes along – truly an overlooked masterpiece of Caribbean fiction.
- Lorin S

Maxine Clair, Rattlebone
The word “luminous” is overused, but this novel-in-stories glows with warmth. At its center, a girl growing up in a small Black town outside Kansas City in the ‘50s – but it is a community affair. I don’t understand why it isn’t better known.
- Lorin S

Hongoltz-Hetling, Matthew, A Libertarian Walks Into a Bear: The Utopian Plot to Liberate an American Town (and some bears)
Need Thanksgiving plans? Spend some time with this brief history of Grafton, NH’s misguided experiment in libertarian governance.
- James Addona

Sam Kean, The Icepick Surgeon: Murder, Fraud, Sabotage, Piracy, and Other Dastardly Deeds Perpetrated in the Name of Science
Sam Kean tells several stories of the dark side of science, from ancient Egypt to the present day. Much of what we know comes from ethically dubious places at best, but much of our knowledge comes from evil places, such as torture, slavery, and mutilation, to name a few. Kean even discusses possible fugure cimes done in the name of science and of furthering knowledge.
- Kate Marcus

Susanna Clarke, Jonathan Strange and Mr. Norrell
Low fantasy adventure, regency pastiche, British mythology love letter, social inequality critique, gothic romance, Napoleonic alternative history – you wouldn’t think that they’d fit in one book or that it’d be entertaining if they did, but they do and it is.
- Kirsten Carleton

Tovah Martin, photography by Kindra Clineff, The Unexpected Houseplant: 220 Extraordinary Choices for Every Room in Your Home
Did you know that you shouldn’t re-pot your plan into too big a pot? I didn’t either until I read this book! Lots of good tips and inspiration.
- Christina Amato