Home > Our Collection > About the Ledger 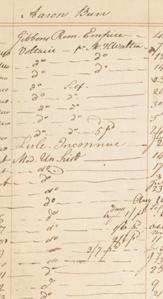 The Library's first circulation ledger is a valuable resource for understanding the borrowing activities and reading habits of our early members. At the time, no other public library existed in the city, and a membership in the Society Library was an affordable alternative to purchasing scarce and expensive books, many of which were shipped from overseas. The ledger shows senators and governors sharing books with merchants, coffee shop owners, and other working men and women of New York City and its surrounding areas.

This ledger is the earliest surviving circulation record of the Society Library. Ledgers like this one remained in use until the early 20th century, when individual charging cards were adopted. The initial pages of this ledger contain a daily record of circulation from July 24 until November 20, 1789. After this date until mid-April 1792, entries were instead recorded on individual pages for each member. Presumably, a new ledger was begun in April 1792, but it does not survive.

The digital images on this website provide for closer analysis of the fragile document. Because 18th-century handwriting is often difficult to decipher, and the ledger entries contain misspellings, errors, abbreviations, omissions, ink spills, lost fragments, and other inconsistencies, the provided transcriptions and the following informational guide are intended to be an aid to interpretation.

Information found in the ledger includes the following:

Each entry contains a title reference, which might include a shortened title, an abbreviation, the author's last name, a call number, or simply a ditto symbol as successive volumes were borrowed. Volume numbers and year numbers for annual or periodical publications are also sometimes indicated. While cryptic, it is often possible to discern the intended title by comparison to other entries in the ledger and through reference to the Library's printed catalogs from the same time, including the 1789 catalog and its 1791 and 1792 supplements, and the 1793 catalog, which replaced the earlier catalogs.

However, some entries could refer to a number of possible works, and further identifying information such as edition, publisher, or date of publication are not indicated in the ledger or catalogs. Though many of these original books have disappeared from the collection over the years, many others have been identified in our Special Collections. Our copy may be a replacement copy or an entirely different edition or imprint than the one in question, but in some cases our copy has original bookplates, call numbers, or other information which identifies it as the exact copy which circulated at the time of the ledger. In the transcribed pages, each identifiable title links to a summary of that book's circulation history, along with further information including whether the Library has any extant copies of that title, and if so, a link to our online catalog. Titles that appear in bold within the borrowing history of members indicate books listed as In Library.

Each entry in the ledger contains the date borrowed and the date returned for the book. Entries are arranged chronologically by the date of borrowing, but full dates are rarely written out. Members were allowed to borrow only one book at a time per share purchased, so the date of return for one book often matches the date of borrowing for the next book. Where possible, standardized dates have been supplied in the transcription based on the Library's operating schedule, circulation periods, fines, and comparison to other entries. In 1789, the dates generally follow the operating schedule of Mondays, Wednesdays, and Fridays, while in early 1790, the Library began operating every day except Sunday.

Book size is often indicated in the ledger according to conventions of the time, reflecting the arrangement of bookshelves and catalogs for the purpose of recognition and retrieval, and for more efficient and attractive use of shelf space.

Books of this period were printed and bound by hand, resulting in greater variation from copy to copy. Printers would arrange the text for multiple pages onto one large sheet of paper, to be folded and cut by the binder, according to one of the following formats:

Strictly speaking, these formats, and the abbreviations used in the ledger, are based on the Latin word for the number of leaves derived from each folded sheet of paper. However, variations in paper size and in the amount of margin trimmed off in the binding process means that two copies of the same format might be different sizes, while copies of different formats may be the same size. For this reason, books were shelved where they would fit, and the size indicated in the ledger may not represent the actual printed format of the book.

Format or size (see above) was also a rough indicator of such qualities as the book's price, length, portability, and content. As today, the larger, more expensive and immobile books tended toward illustrated reference, travel, or scientific works, while the cheaper and more portable books tended toward popular fiction and devotional works.

Therefore, size was also used to set circulation periods and fines, with larger books circulating longer but also incurring larger fines when late. The Library's 1789 by-laws are as follows:

Circulation periods were doubled for those who resided outside of the city limits. Charges could be renewed if no one else had requested the book in the meantime. The abbreviation "Con" for "continued" is found in the ledger when a book was renewed.

Fines in the ledger are indicated in Pounds, shillings, and pence. The United States began issuing Dollars in April 1792, but New York Pounds continued to circulate until 1793.

Occasionally, someone such as a member's family member, servant, doorkeeper, or friend might borrow a book on his or her behalf, sometimes indicated in the ledger by a name, or by words such as "boy" "doork.," or successive ditto marks (do) or "Self" as necessary.