Home > Our Collection > Maggie Jackson on The Road to Distraction: A Reading List on the Roots of Our Climate of Inattention

Maggie Jackson on The Road to Distraction: A Reading List on the Roots of Our Climate of Inattention

The author of Distracted: Reclaiming Our Focus in a World of Lost Attention, Maggie Jackson will lecture at the Library on September 12th in the Members' Room.

The genesis of my book Distracted grew out of my long-term interest in technology’s impact on humanity. As early as the late 1970s, when the predecessor of the iPod, the Walkman, made its 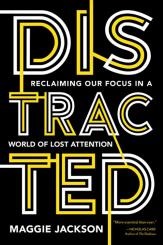 startling appearance, I sensed that syncing ourselves to the machine would have enormous repercussions for how we think, relate, work—and how we pay attention. Technology’s benefits are plentiful: instant information, ease in communicating, the pop of the visual everywhere we go. But by the late 1990s, the forces of deepening virtuality, hyper-connectivity, and budding artificial intelligence created the conditions for the information overload, the rampant interruptions, the time droughts, and the distraction that we so often experience today.

How can we better cope with this predicament? Because we are now living within—some might say entrapped by—this new reality, we are becoming less capable of fully grasping technology’s influence on our lives. We may rue distraction, fret about the pace of life, or wonder about our children’s ability to focus. Yet our “closeness” to technology undercuts our capacity to see the digital revolution with clarity and more importantly, to imagine a better way forward. This is why it’s crucial, I believe, to study the historic and cultural roots of our technological distraction. Here are a few titles from the stacks that helped me gain perspective on how we arrived at a time of rampant splintered focus and diluted awareness:

Now we take it for granted that we can hurtle our bodies and thoughts around the world at a snap. But not so long ago, the railroad, steamship, automobile, and most 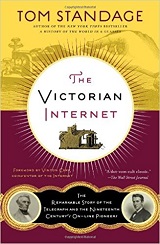 of all, the telegraph radically shifted human experiences of time and space. When communications became near-instant, human relations (and our expectations of them) changed to become asynchronous, brief, splintered, and faceless. As chronicled in this entertaining history by a British journalist, telegraph operators were at the forefront of this revolution, as they flirted, bantered and even married online. They were the first to experience the virtual relations that connect and disconnect us today.

This book by a gifted science writer and artist is an unusual investigation into the idea of the virtual as a “repository for our spiritual yearnings.” Wertheim probes the early vision of the Web as a heaven-like space for peaceful, effortless, global human interactions, and takes the reader on an intellectual journey across multiple types of space—from that offered by Einstein’s notions of relativity to medieval ideas of the afterlife—to help us reappraise the digital realm we unthinkingly inhabit. This is a book that helps us understand how and why our boundary-less world changes the nature of our attention. [A complement: radical geographer Yi-Fu Tuan’s Escapism, a provocative exploration of a deep human need now often answered by the Net.]

It’s easy now to catapult ourselves into other worlds not of our own making and not fully under our control. But this prescient debut novel released in 1984 articulated the wonder and horror of 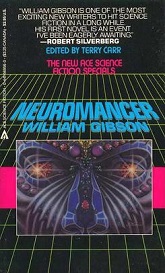 the cyber-experience long before most people had ever heard of the Internet, much less experienced what he called the “consensual hallucination” of virtuality. Neuromancer introduced the word cyberspace, inspired the movie The Matrix, and won the triple crown of sci-fi literary prizes, the Nebula, the Philip K. Dick and Hugo awards. But don’t let the term “sci-fi” keep you from reading this incredible book, the story of a washed-up computer data-thief fighting for his identity in a world controlled by big tech conglomerates. The book helps us to better understand the absorption demanded by virtuality and to realize that there is no “off button” to digital life anymore. [A complement: The chillingly prescient short story “The Machine Stops” by E.M. Forster, available in the Wesleyan Anthology of Science Fiction.]

Along with the beleaguered focus brought on by the pace and tenor of virtuality, our lives are being radically changed by deepening bonds with increasingly human machines. Why are we so easily beguiled by our mechanical alter egos and what happens to our willingness to attend to other humans when we begin to love and obey Siri, Alexa, and a growing roster of robotic companions, tutors, and advisors? Gaby Wood’s intriguing book traces the history of robotics back to the 18th century automaton, Edison’s talking doll, recent creatures concocted by MIT, and other comic-tragic uncanny inventions. [A complement: Walter Benjamin’s “The Work of Art in the Age of Mechanical Reproduction” in the anthology of his writings, Illuminations. This essay talks about how limitless copies of an artwork dilute its presence.]

Maggie Jackson is an award-winning author and journalist whose acclaimed book Distracted, now out in an updated new edition, has been compared to Silent Spring for its prescient warnings of our current crisis of inattention. Jackson's commentary and articles have appeared in publications worldwide, including the New York Times, the Wall Street Journal, and on National Public Radio, and her essays feature in numerous anthologies, including The State of the American Mind: Sixteen Leading Critics on the New Anti-Intellectualism (2015) and The Digital Divide (2010). She is currently working on a book about uncertainty.